I have a confession to make and I’m a little embarrassed to do so.  I went on a classic beach holiday recently and I absolutely loved it.  We had the opportunity to go to nearby Barcelona and Girona but instead, we spent our week in Santa Susanna, Catalunya doing… very little.

We went to the beach, we suntanned by the pool, we took a little tour around the Old Town and we ate lots of incredible Catalunyan food.  We learned that Catalunyan bartenders don’t measure spirits and we learned why they wish you good luck when they give you cocktails.

It was the best holiday I have ever had.

So I apologise dear readers because quite unlike my usual 500 photographs, I came back with 35, seven of which weren’t of the beach.

Don’t worry though, it doesn’t mean that I’ve given up travelling or that my Kindle has finally taken the place of my blog, but I do think I’ll be taking at least one beach holiday every year or two in future! 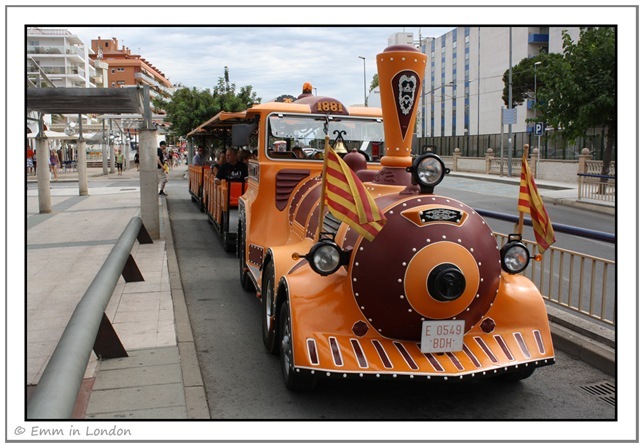 This is El Cuc, the tourist train that takes you up into the mountains of Santa Susanna, around the residential areas and through the Old Town.  It was ridiculously cheap at €4 per person for an hour and it was a great way to orient yourself to the town. 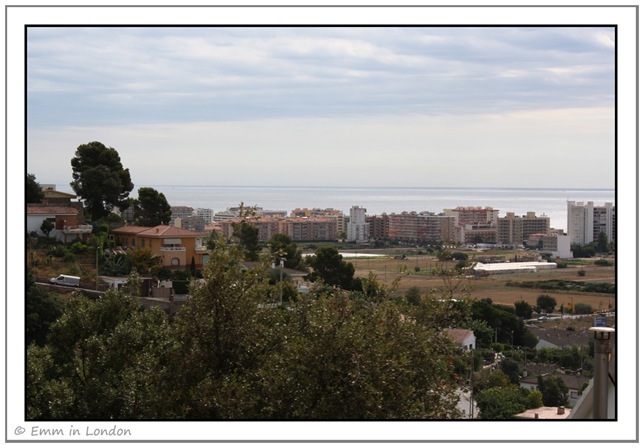 Santa Susanna is a beach resort in Catalunya, Spain (although the locals will go to some lengths to explain to you that Catalunya is not Spain).  It lies on the Costa de Barcelona-Maresme between Barcelona and Girona.  It really is perfectly placed if you want to visit both of these old cities and it was why I chose it in the first place. 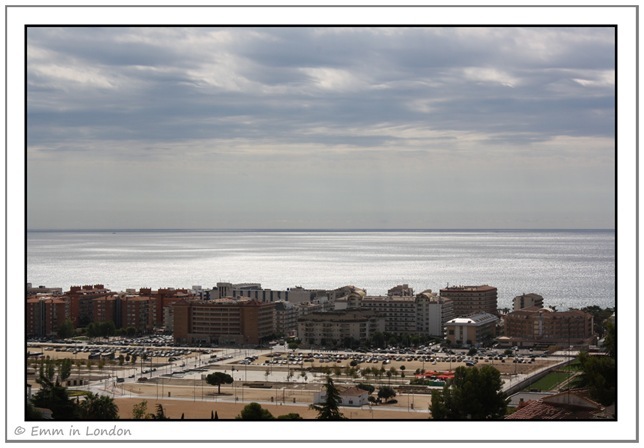 How beautiful is that?  The little cream building with the brown roof just right of centre in the photo above was our awesome hotel, the Aqua Hotel Montagut.  I have never received such incredible service before and everything from the room to the food was perfect. 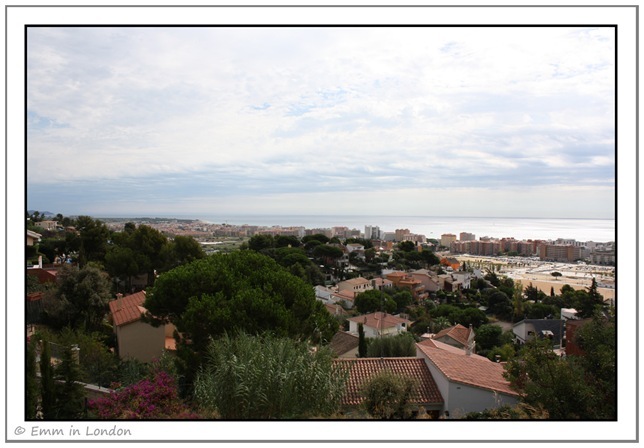 There were some lovely villas in the hills.  I’ve always been fond of Spanish-style villas and they are extremely popular in Johannesburg.  I could just imagine us living here! 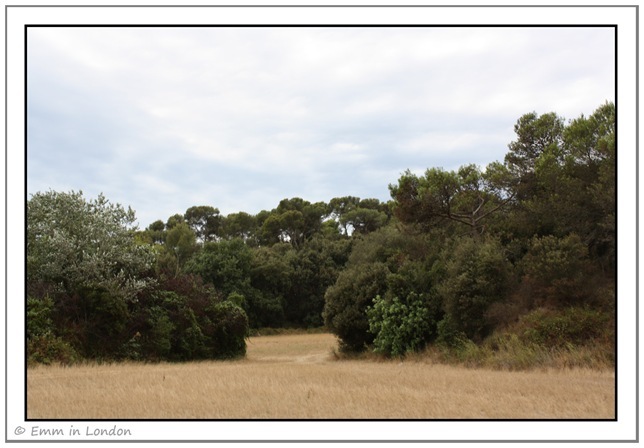 We were a little surprised to see that autumn seemed to have come early in the hills of Santa Susanna.  It was a different world by the coastline, not nearly as arid. 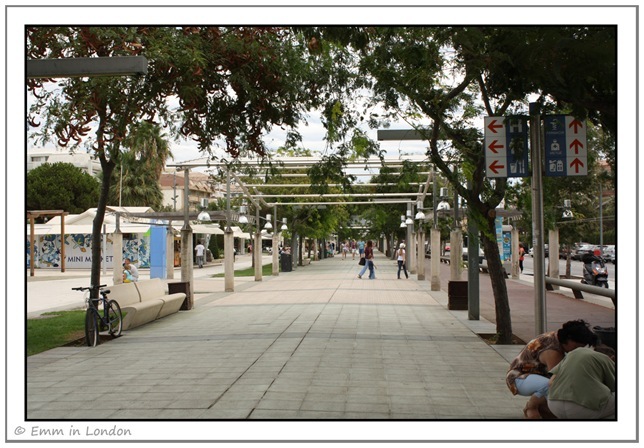 I admit, we weren’t completely lazy.  We took lots of walks up and down the Avinguda del Mar.  On the second night we were here, there was a fabulous street market taking place the whole way down this avenue with the most colourful and beautiful stalls.  I had no idea that it only ran on Tuesday nights or else I would have been taking lots of photos! 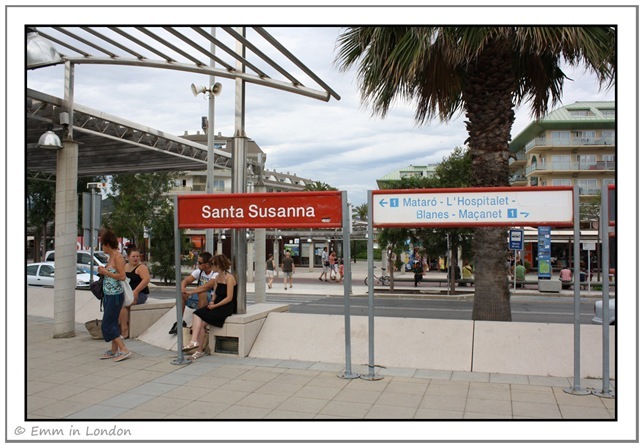 This is the Santa Susanna train station and it is opposite the tourist information kiosk.  It is really easy to catch a train to Barcelona, the botanical gardens in Blanes or the old town of Girona.  We thought the prices sounded really inexpensive compared to what we pay in London and the journey to both Girona or Barcelona was about an hour.  Note that we found all of this out but didn’t go on any trips!

I can just hear you asking what it was, exactly, that I did all week.  Well, there was a little bit of this: 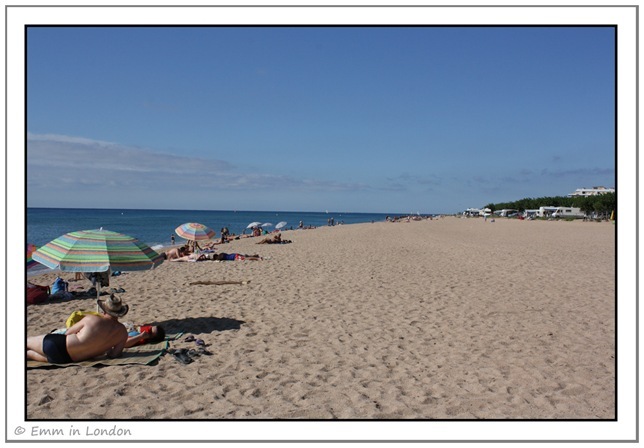 And a lot of this: 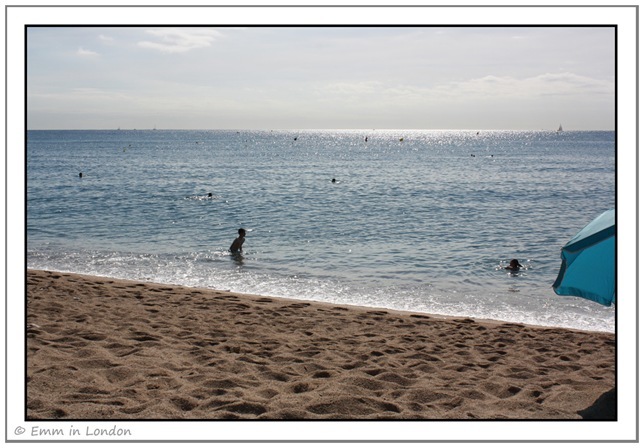 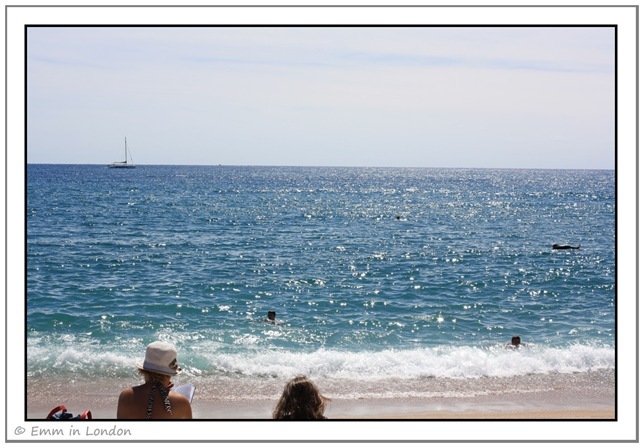 I listened to Alex Clare, Moby and The Heavy as well as Nick Cave & Warren Ellis.  I read a couple of novellas and then discovered Cassandra Clare’s excellent City Of Bones.  We swam in the Mediterranean Sea for the first time and fell in love with Catalunya, as we knew we would.  And most of all? We just spent time together.

It was fabulous but we did promise that we will return to Girona or Barcelona within a year to make up for being Bad Travellers.

When was the last time you truly relaxed on a beach? Or do you prefer to explore and travel and discover instead?