A Sad Goodbye to Wenlock and Mandeville

Wow, can you believe that the final day of the Paralympics is here already?  I can’t believe London’s Olympic dream is finally over and that we’ll soon be handing the baton to Brazil.  It occurred to me last night that this is it – there is no “next time” to look forward to.  Well, to mark the end of the Olympic journey, join me as I continue my trail in search of the Olympic mascots Wenlock and Mandeville.  And this is indeed farewell as they will soon begin to disappear from our parks and walkways.  I wish they could stay forever!

All of these photos were taken on a wet and rainy Friday afternoon two weeks ago, many from underneath my ailing umbrella.  I walked from Tower Hill, through the City to St Paul and across the Millennium Bridge to the Tate Modern and on to London Bridge before landing up at City Hall. 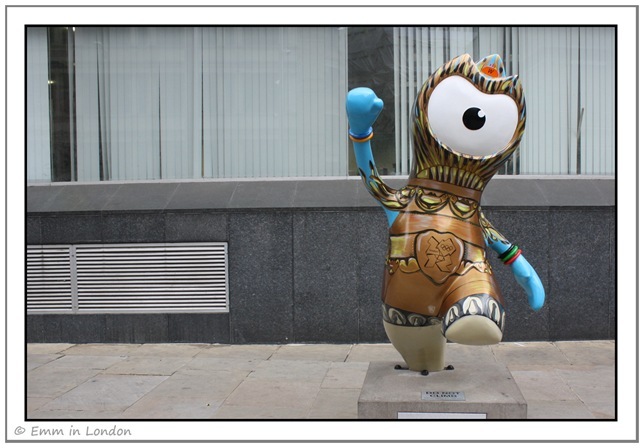 The first mascot I spotted on this occasion was Monument Wenlock, named after The Monument to the Great Fire of London in 1666.  Given that he looks nothing like the Monument, I’m going to guess that he is meant to look like the giant flame which sits above it.

His plaque says: “What a view! I can see the whole of the City of London from the top of here”.  I haven’t been to the top of the Monument yet and I was so tempted to do so but I had important mascot-spotting duties ahead! 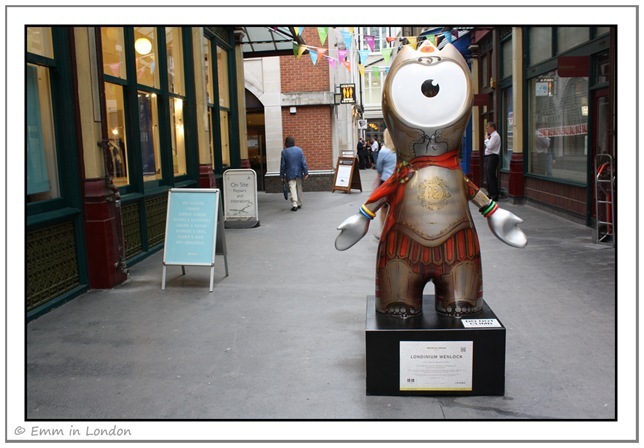 One of the favourite mascots of all and my reason for taking this second walk was Londinium Wenlock which was located in Leadenhall Market.  How cute is that? I just love his little Roman skirt. 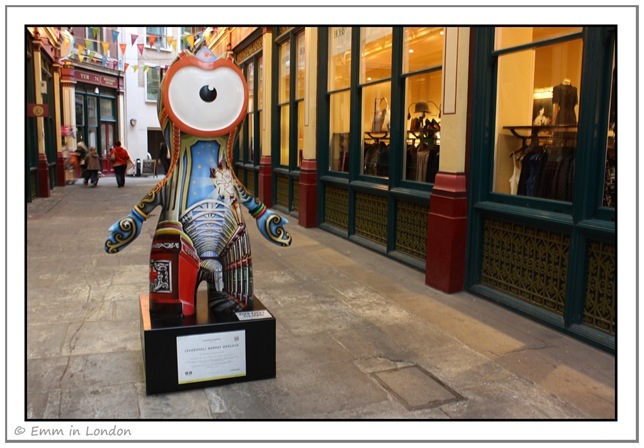 Just around the corner, I located Leadenhall Market Wenlock.  I love this market and loved how you can see the glass roof on his tummy. 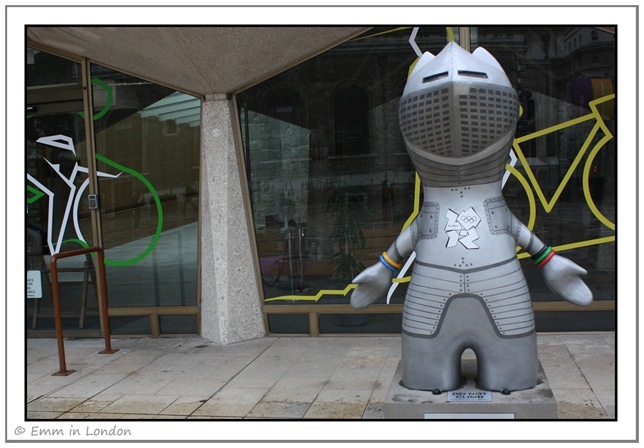 Arise Sir Wenlock! This is Stephen’s favourite Wenlock of all and he loved this little Knight which was located in Guildhall. 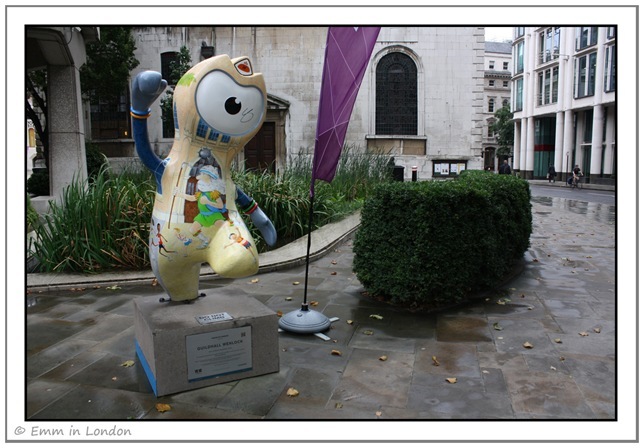 Just around the corner was Guildhall Wenlock who didn’t seem to offended by the graffiti tag on his eye.  His plaque says: “I’m guarding the City of London for the Lord Mayor with my giant friends Gog and Magog”.  I was personally pleased that I didn’t run into Gog and Magog myself! 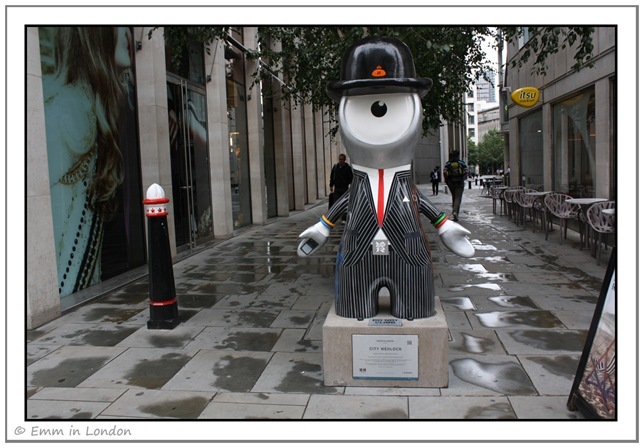 Londinium Wenlock’s biggest competitor for the title of My Favourite Wenlock of All was the oh-so-dashing City Wenlock.  Isn’t he just gorgeous in his pin-stripe suit? 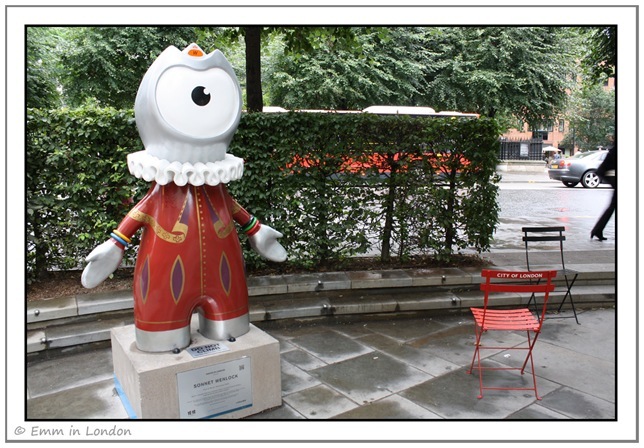 Just around the corner from St Paul’s Cathedral, I spotted Sonnet Wenlock, a tribute to the Great Bard.  I think he would have been better placed across the river, in front of the Globe Theatre but for some reason, that is where Mandeville was.

By the way, I totally repositioned the City of London chair to get what I thought was a better photo.  I thought it was a nice little inclusion in the frame. 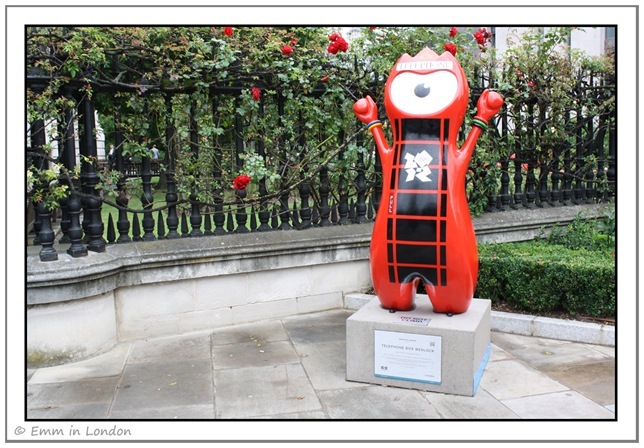 By far, the most popular Wenlock of all was Telephone Box Wenlock located in front of St Paul’s Cathedral.  I had to wait about ten minutes to grab this photo as there was a continuous stream of little children climbing all over it.  Not that I mind.  I love that each mascot had a plaque explaining its importance and thought this was a fabulous opportunity to take children on an educational treasure hunt across the city.  Anyway, that’s why the exposure on the photo is slightly out as I had to capture it in a hurry.  The roses look good though. 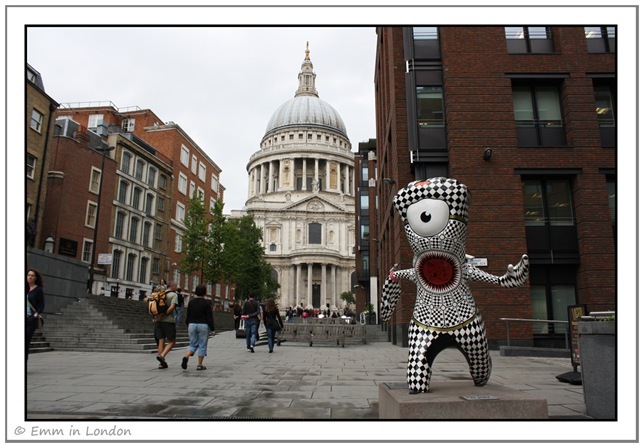 St Paul’s Mandeville was just lovely and had the most gorgeous chequered design across his front and back.  I wish there were more Mandeville’s across the City! 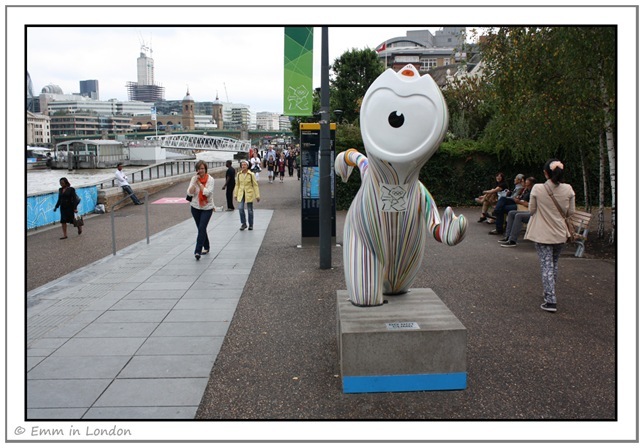 Crossing over the Millennium Bridge, Arty Wenlock was located just outside the Tate Modern.  I definitely think they should have gone with a Pop Art or Surrealist design instead! 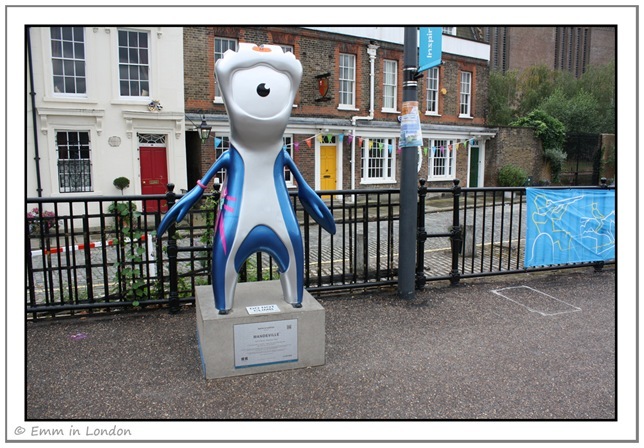 I originally thought that Mandeville was the very last mascot I spotted, seeing that Wenlock was the first one I spotted when I on the trail of Wenlock and Mandeville.  I’m glad he wasn’t because there were some good ones further down along the river.  He was standing just to the right of the Globe Theatre and I definitely think Sonnet Wenlock should have been standing here instead. 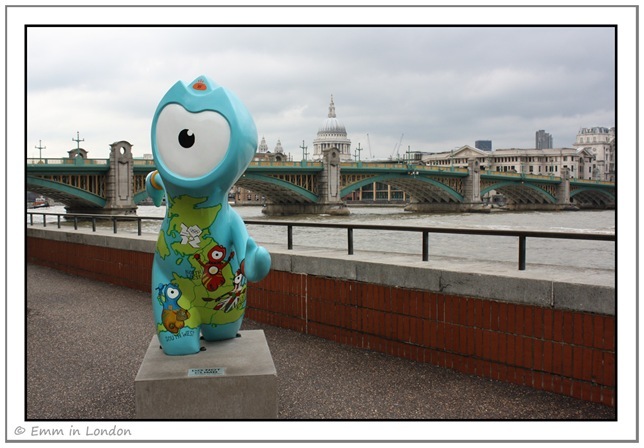 Don’t tell him I said this, but I definitely thought that Rainbow Wenlock was the most boring of all the mascots that I spotted.  He was meant to represent the whole of Great Britain but I’m sorry, there can be only one Rainbow Nation. 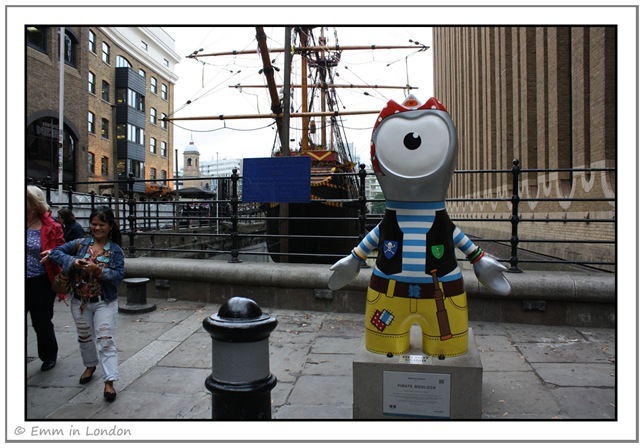 Pirate Wenlock is definitely my third favourite Wenlock and he was standing in front of the Golden Hinde in Southwark.  What a jolly young sailor! 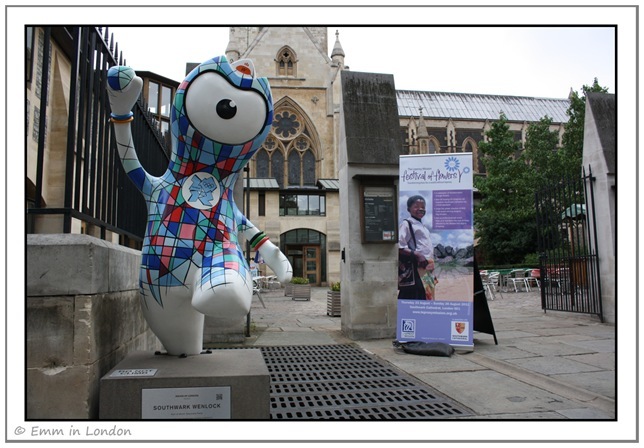 Southwark Wenlock was standing just in front of Southwark Cathedral.  You might be interested (or disturbed) to know that I got down on one knee in the middle of the road, in the rain, to capture this photo.  I just wanted to include some of the cathedral in the photo! 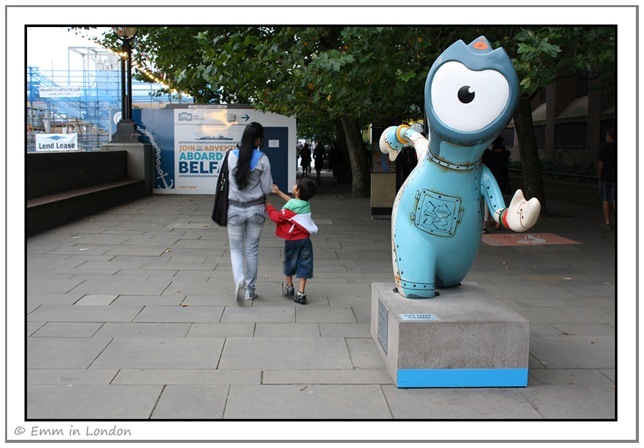 Maritime Wenlock was standing just beside HMS Belfast.  I love how you can see the rivets and panels in his design and that just happens to be my favourite colour too. 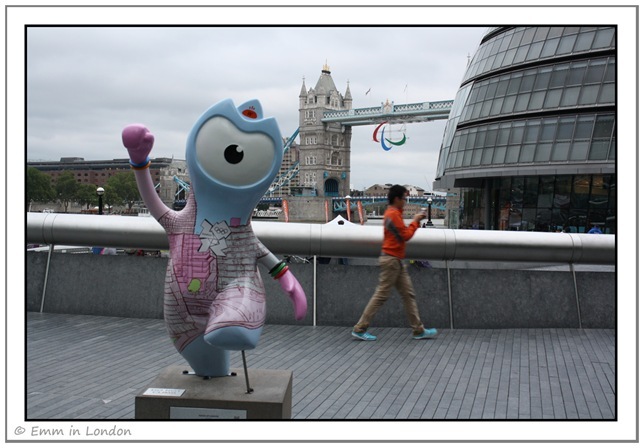 The very last Wenlock on my trail was Skyline Wenlock..  You can spot City Hall and Tower Bridge in the background with the Paralympic Arigatos hanging down.  His plaque read: “I’ve been counting London’s famous buildings and landmarks. How many can you spot?”  Well, I had quite a journey tracking down these mascots and absolutely enjoyed this treasure hunt.

I will be truly sad to bid farewell to all of the Wenlocks and Mandevilles.