London in a Golden Autumnal Glow 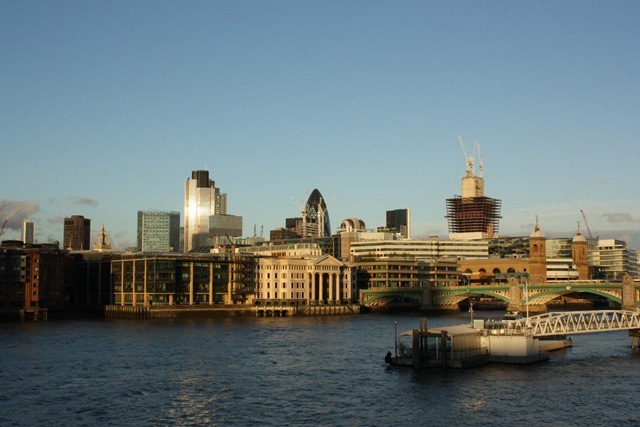 After spending a fantastic day in London today, we walked out of the Tate Modern at dusk and noticed that London was bathed in the most exquisite autumnal glow.  It really was the golden hour and we couldn’t help snapping away with our cameras. 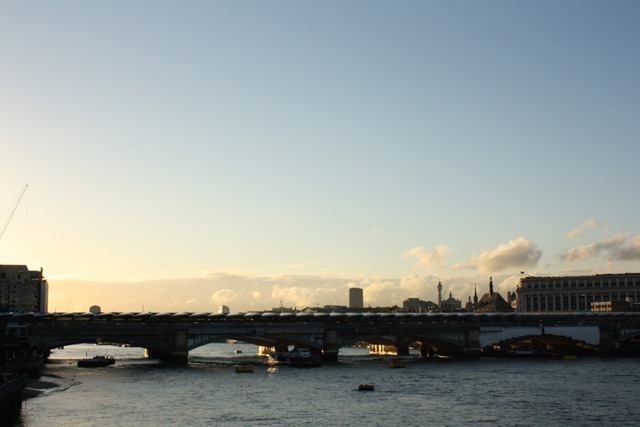 To the west, there were soft clouds on the horizon and to the very left, a pinnacle of a tall building bore a sharp reflection of the sun.  I could barely look in that direction, so chose to leave it out of my photo. 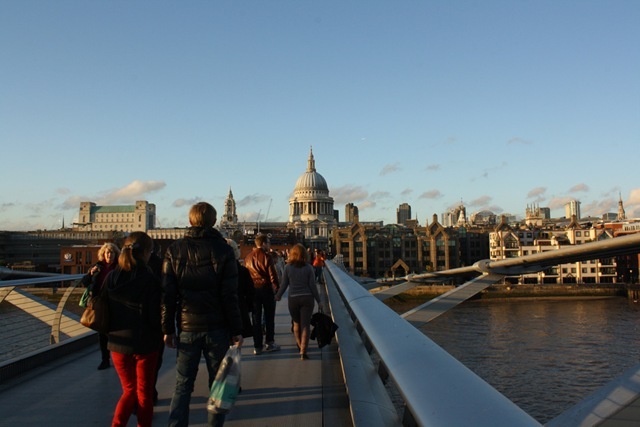 Straight ahead, we could not help but marvel at how beautiful and peaceful St Paul’s Cathedral looked.  We felt drawn to cross the bridge and had a giggle at the poor city bankers trying to walk against the flow of the relaxed and wandering crowds. 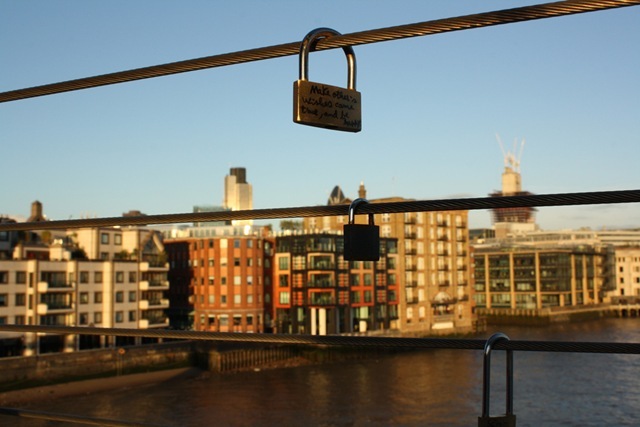 We were thrilled to discover that several padlocks have recently been attached to Millennium Bridge.  Locks of Love are popular in Europe but I haven’t seen them in London before.  I wonder if they will stay for long?  British officials are not known for their sense of humour. 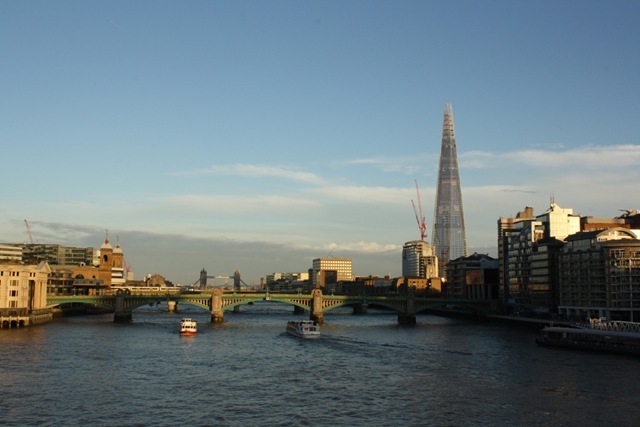 The Shard looked beautiful, as always, but knowing my bias it is possible that I am not the most objective source. 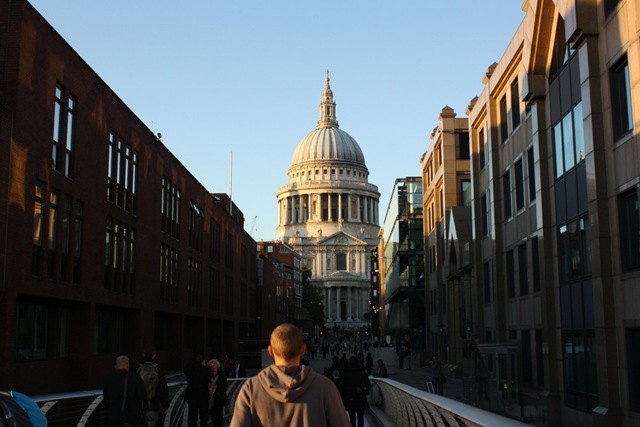 St Paul’s Cathedral was draped in a soft light.  This is one of the many locations in London that I feel unable to stop taking photos of. 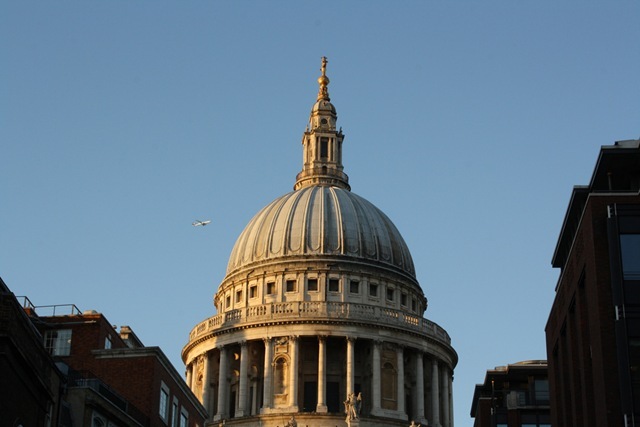 I loved seeing the plane as it came into the shot. 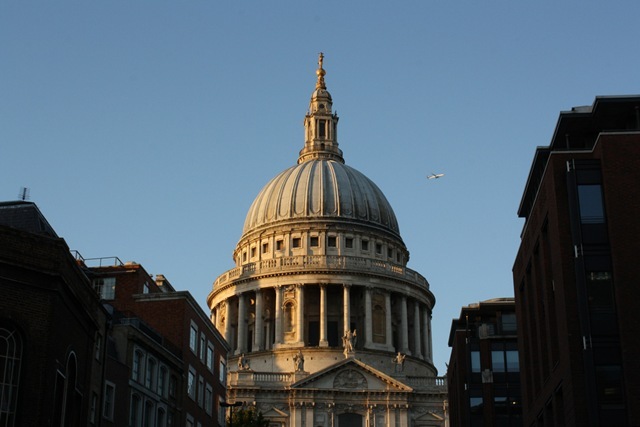 Many planes fly over London on route to and from Heathrow and London City Airport. 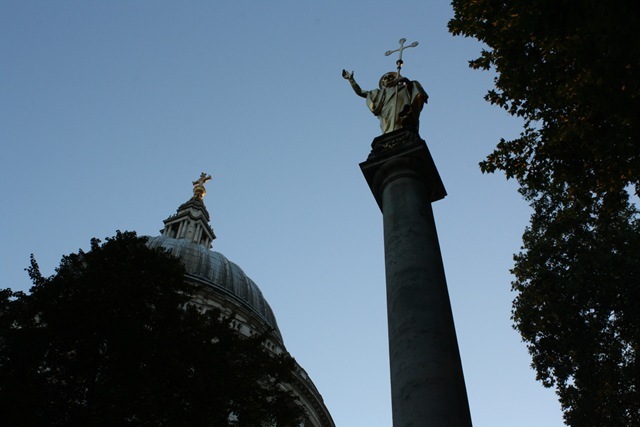 We wandered into the gardens of St Paul’s Cathedral and my final photo before the end of the golden hour was of St Paul and his Cathedral.

I’m undecided now as to whether I prefer the golden hour at dawn or dusk.  I’ve posted about London at Dawn and the Golden Hour before but this light felt slightly less muted and more positive and uplifting.  There is the promise of a whole new day at daybreak but the lighting this afternoon seemed to convey that the day was far from over.  Which do you prefer, dawn or dusk?

I must apologise if my posts been a little erratic lately.  I had a visitor last weekend and this week I am spending a whole week with my best friend’s daughter taking her around London.  I usually wouldn’t mention it but next week I begin studying two nights a week again and am taking two subjects at the same time.  I know I’ll be happy about this in 8 weeks time but for now must beg your indulgence if the posts become a little spotty.