The Art Deco movement was an international design style that relates to buildings built between 1926 and 1937. The origin of the movement has been traced to the International Exposition of Modern Decorative and Industrial Arts in Paris in 1925. Of course, this was a movement, and while designers and architects soon began to design in similar ways, the term 'Art Deco' was only really coined in the subsequent revival in the 1960s and applied to the work of the 1920s and 1930s.

Art Deco was a rejection of the Art Nouveau movement and reflected the increasing influence of modernity with its decidedly futuristic style and focus on geometric and linear contours and lavish ornamentation.

Despite its short reign, cut short by the Second World War, the Art Deco movement left its mark with skyscrapers, cinemas, mansion houses, petrol stations and diners across the world.

Last weekend, I was very lucky to attend a free Art Deco in Bloomsbury walking tour given by Yannick Pucci as part of the Bloomsbury Festival in London.  The tour was superb and as you will see from the post below, I am really enthusiastic about what we saw and how much we learned. To be honest, once I’d written the post, I was a little stunned by its length and detail and wondered if I should cut it short. I don’t want to give away too much but the majority of my fellow Art Deco lover readers are in Australia, America and South Africa.

I’ve decided to leave it as is, for the benefit of my international readers. If you’re in London, quickly scroll through this post to look at the pretty photos and then rush over immediately to book Yannick’s next Art Deco walks on November 2nd or 30th. 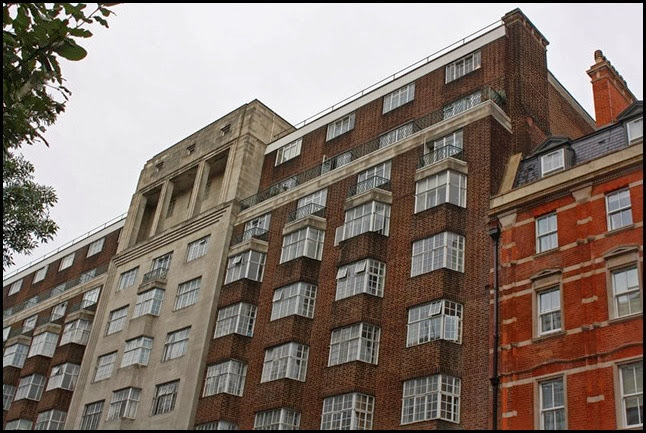 This mansion block was built in 1937 and celebrated its 75th anniversary last year. Russell Court reflected the Art Deco fashion for communal living and was divided into 500 single occupancy units.

It is anyone's guess who lived there in 1937, some say bachelors, spinsters or war widows and some even suggest mistresses! Nevertheless, one can assume that only the wealthy live there now. Russell Court cost £250,000 to complete in 1937 but today you won't find a single apartment for less than that.

The Art Deco styling can be recognised in the geometric lines and bay windows of Russell Court. 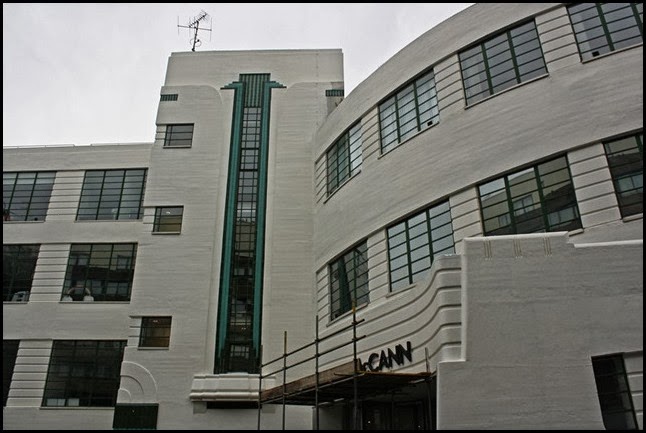 Now the offices of McCann Erikson. Built in 1931, the Daimler Hire garage was home to the luxury car company hiring out chauffeur-driven limousines to the rich and famous. Yannick noted that this would not be the last time we matched the influence of automobiles with Art Deco.

On the right of the building is a ramp and the cars would have driven up the ramp and been displayed in the glass-fronted showrooms on the first and second floors.

The Daimler Hire garage was designed by Wallis Gilbert & Partners, the same architects who designed the Hoover Building and has been said to be of the Streamline Moderne style or Miami Deco.

Yannick told us a tale, which he warned was most certainly an urban legend, claiming that the famous Fisher Price garage was modelled after the Daimler Hire garage. You know, I can almost believe it and as a massive Fisher Price fan, I have to say that it's my favourite urban legend of all time.

School of Pharmacy, University of London 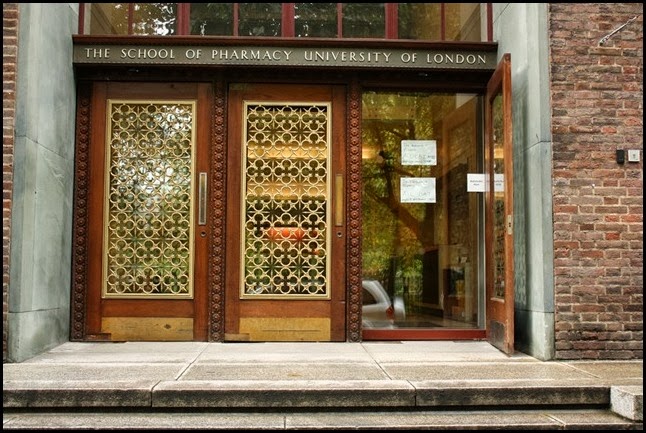 The School of Pharmacy was in Bloomsbury Square for 135 years before deciding to expand to their own premises on Brunswick Square. The building was designed by Liverpudlian Art Deco architect Herbert Rowse in 1935 and work began in 1938. Sadly, the building was never really finished; work was disrupted in 1939 when the Second World War broke out and a temporary roof had to be installed. With the lack of money and resources following the war, work on the buillding only restarted in the 1950s and when it was officially reopened in 1960, it was described as the ‘oldest new building in London’.

The flat roof, ornate railings and stylised lamp posts mark the School of Pharmacy as an excellent example of Art Deco. 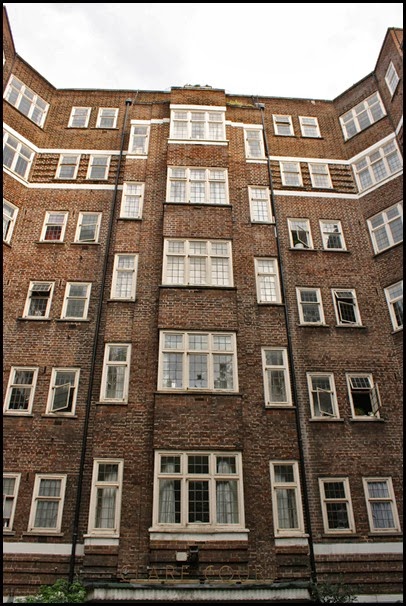 This residential building was built sometime in the 1920s but sadly there is little further information known about the building. It is a shame because, with it’s central column and bay windows, Clare Court is a perfect example of Art Deco design. I liked the distinctive Art Deco lettering of the building name (just visible at the bottom of the photo above) and the lines of the central column that draw your eyes up to the sky. 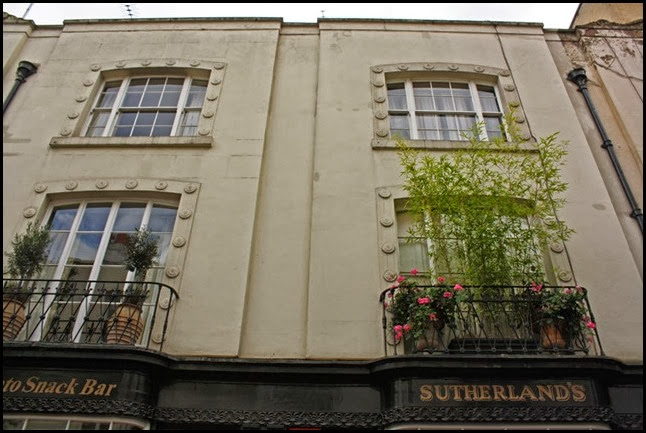 Woburn Walk was London’s first pedestrian shopping street and was designed by architect Thomas Cubitt in 1822. It lay on the edge of the opulent Bloomsbury suburb near to the Euston Road. While architecturally, Woburn Walk was built long before the Art Deco trend, the flat roof, balconies and ornamentation of the early 20th century redesign make this a good inclusion on our tour. 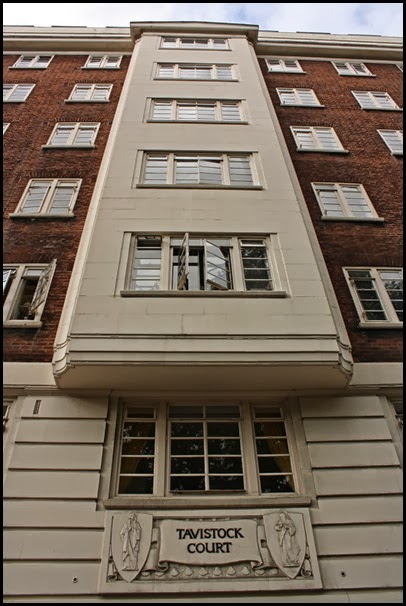 I realised on this walk that I had to discard everything I had learned about photographic composition. Art Deco is best captured in balanced, symmetrical photos that captures the geometric lines and contours of the buildings.

The first thing I noticed about Tavistock Court were its wonderful friezes which you can see in more detail in this album on the Emm in London Facebook page. Do look out for the frieze of the deer and the soldier which tells the story of St Hubert who encountered a deer while out hunting after the loss of his wife and child. The deer had a golden crucifix between his antlers which brought St Hubert back to the church

Tavistock Court was built in 1935 by the National Free Churches Council. The organisation is now known as Churches United and they still own and occupy space in the building, while the remaining 72 one- to four-room flats are rented out. 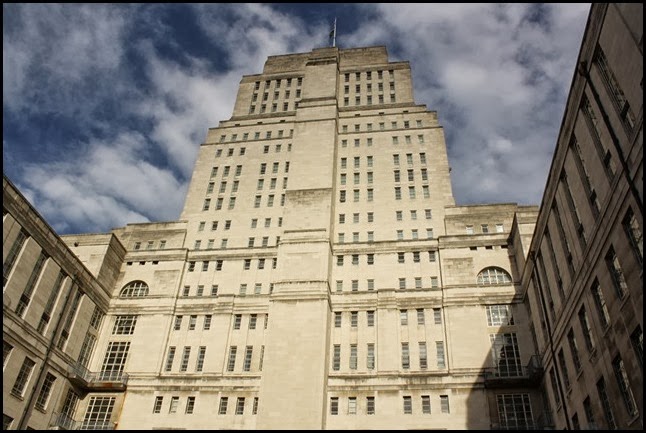 As we walked around the edges of Russell Square past SOAS and turned into the Senate House compound, my breath was literally taken away by the majestic splendour of Senate House. Yannick mentioned that many Londoners had been critical of this structure, likening it to an Aztec temple (strange, I thought it looks exactly like a ziggurat) and I can see that. I wonder if I might have disliked it too in my younger days, just as I once disliked brutalism?

Senate House was London’s first skyscraper completed in 1937 at 64 metres high. It was second only in height to the dome of St Paul’s Cathedral, a record it held until the 1960s.  Senate House was designed by Charles Holden who also designed St James’s Park tube station.

Apparently, Holden had originally designed a massive 370 metre long structure leading all the way down to Torrington Street and it was actually approved! Thank goodness that construction was cut short by the Second World War because Holden wanted his building to last for 500 years and we’d be stuck with a massive behemoth now.

Senate House is 19 stories high and built almost entirely of Portland stone as Holden didn’t believe in using steel in his constructions.

Apparently, George Orwell took his inspiration for the Ministry of Truth from Senate House. Orwell's wife had worked here during the war when it was the Ministry of Information. 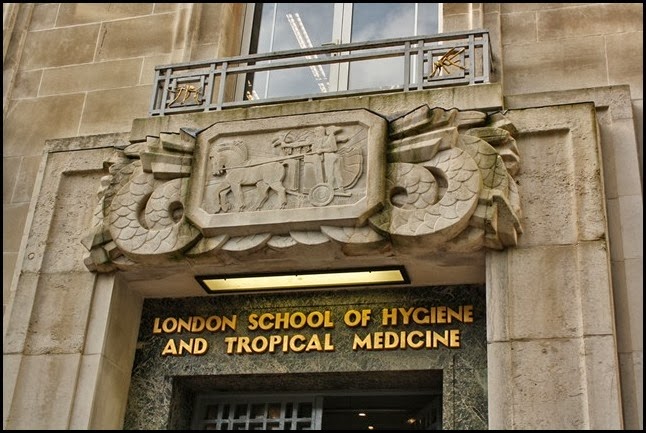 From a distance, the London School of Hygiene and Tropical Medicine has definite Classical qualities, including laurels wrapping the top of the building but it also has clear Art Deco features including the stylised friezes, geometric lines, balconies and gilded animals representing pests such as mosquitos, serpents and rats.

Throughout his talk about the frieze above, based on the design of ancient Greek coins, Yannick referred to the serpent which I couldn’t for the life of me see. Of course, I see it now, clear as day! 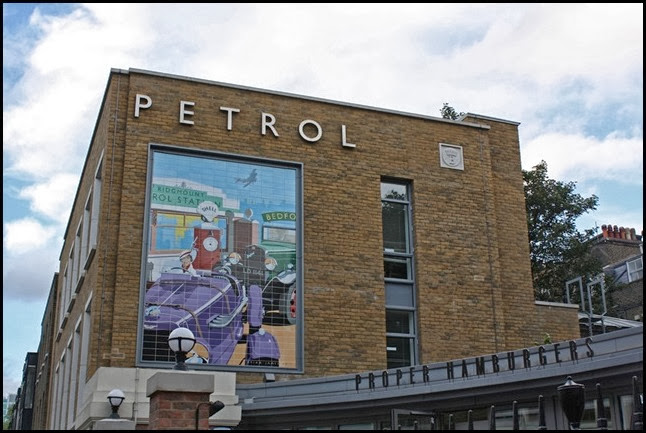 Bloomsbury Service Station was possibly the oldest petrol station in London and it closed in 2008 after a failed attempt to gain listed status. This will be the only structure where I show you two photos because I wanted to show both the commissioned artwork above and the sleek Art Deco lines of the former petrol station below.

The artwork by Brian James was commissioned by The Bedford Estates who own much of the land in this area. It is a snapshot of the history of the Bedford family in Bloomsbury and shows the original Ridgmount Petrol Station as it was in the 1920s. Also visible is a a Bedford van, sports car in the Bedford family horseracing colours (purple with white stripe) and biplane in homage to Mary Duchess of Bedford who was an aviator in the 1920s and 1930s, having learned to fly in her 60s and who disappeared in 1937 while on a solo flight. 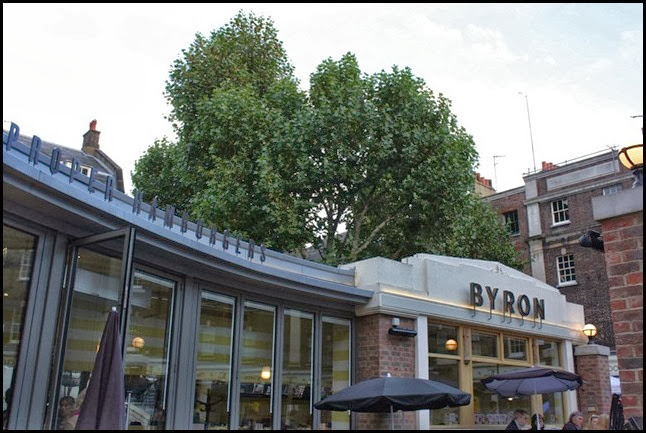 Because it closed so recently, we are very lucky to have a clear idea of what this structure looked like as a service station and you can see a photo here. The glass fronted curve above covers much of what would once have been the station forecourt. 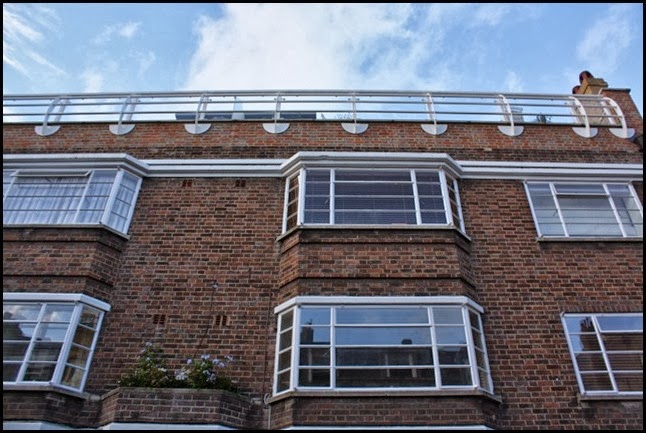 The final stop on our superb tour was Gower Street Mews. This was an interesting street because we saw the converted Art Deco mews in front of us, with flat roof, stylised railings and bay windows but behind us stood the original Victorian mews.

Click to view the full Art Deco in Bloomsbury Facebook album featuring 33 more photos, including the Victorian side of Gower Street Mews. I’d be ever so grateful if you liked my Facebook page while you are there!

Yannick was an excellent guide and I will definitely be joining him on his Holland Park walking tour in the future. You can catch up with Yannick on Twitter where he is @ypldn or on his blog London Art Deco Tours. Thanks for the great tour Yannick!