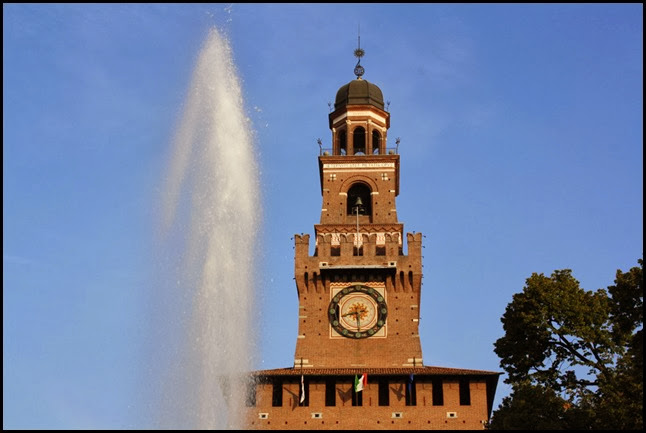 I have a confession to make which long time readers of this blog might already have guessed: I am obsessed with castles. Nothing thrills me more than to discover that there just happens to be a castle in our next destination. Perhaps because his wife is a castle-obsessed eternal tourist, you may not be surprised to learn that my poor long-suffering husband (and most partners-of-bloggers are long-suffering) is kind of over them.

It was therefore serendipitous when we visited Milan as not only was there a beautifully restored Renaissance castle but Stephen was spending the entire weekend in Monza for the Grand Prix and I was free to explore to my heart’s desire. 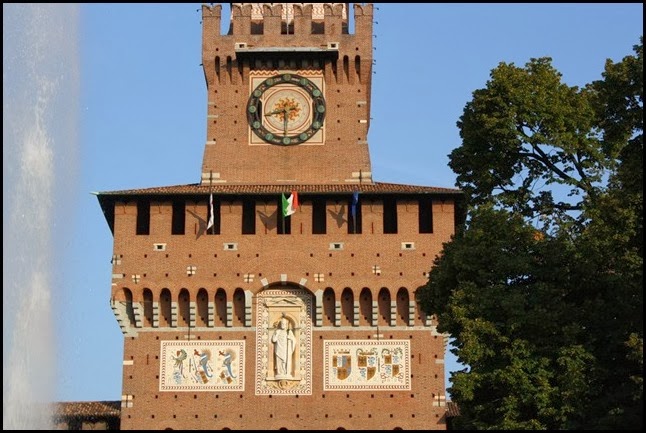 I had another reason for wanting to visit the Castello Sforzesco (Sforza Castle in English). Cardinal Ascanio Sforza is my favourite character in the Showtime series The Borgias and I love the way the name Sforza rolls off the tongue. Ever fascinated by the history behind the show, I wanted to earn a bit more about the Sforza family.  Of course, this was not the first time that I realised that the truth in 15th century Italy was far more gruesome than the fiction of The Borgias. 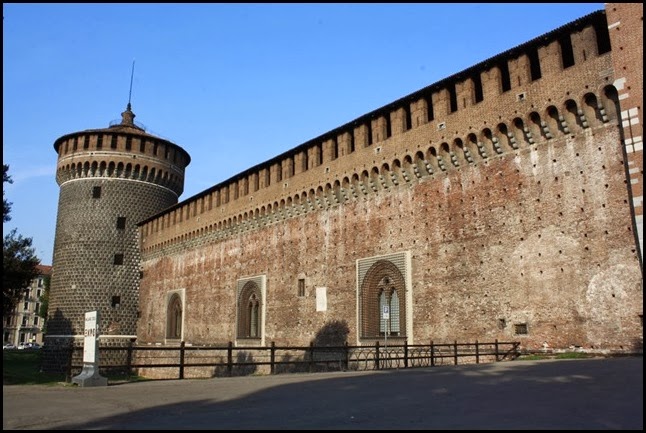 In 1447, the citizens of Milan ousted the Visconti lords and destroyed their castle. It was on these foundations that Francesco Sforza, Duke of Milan, decided to build his residence. On his death, his tyrannical and cruel son Galeazzo Maria Sforza became Duke of Milan but he was assassinated in 1476, leaving the regency to his 7-year-old son Gian Galeazzo. Bona of Savoy, the second wife of Galeazzo assumed the regency which simply did not appeal to Ludovico Maria Sforza, second son of Francesco and brother of Galeazzo.

Following an unsuccessful play for power and subsequent exile, Ludovico took advantage of rivalries in Bona of Savoy’s court; engineered the execution of Simonetta, chief counsellor to Bona; kidnapped young Gian and finally deprived him of his duchy. With Gian stripped of his power, Bona of Savoy was obliged to leave Milan and in 1494, Ludovico Sforza became lord of Milan.

Ludovico may have been ruthless but it was he that invited artists such as Leonardo da Vinci to decorate the castle and is responsible for the ornate frescos that we can still see today. He is also best known as the man who commissioned Leonardo da Vinci to paint The Last Supper in the Santa Maria della Grazie which we also visited on this trip. 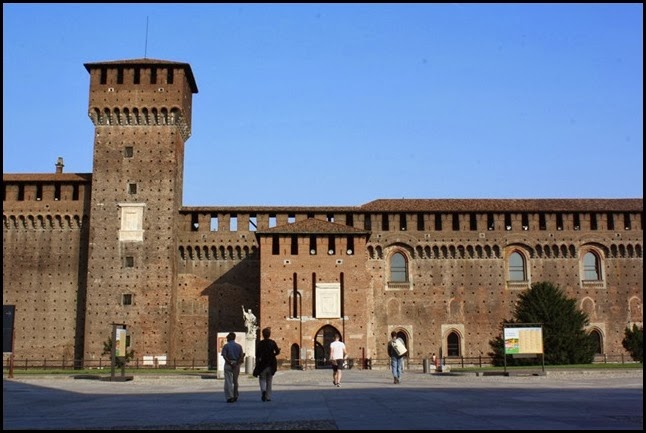 Before we step inside the castle, I’d just like to take a moment to appreciate the exquisite structure of the castle itself. What we see today is primarily the result of extensive restoration works undertaken between 1900 and 1905 under the direction of Luca Beltrami. The Castello Sforza had seen significant changes under Spanish and Austrian rule between the 16th and 19th centuries but Napoleonic rule at the beginning of the 19th century proved disastrous to the castle. The outer fortifications were demolished, the Ducal Chapel transformed into a stable and priceless frescoes were covered in lime. 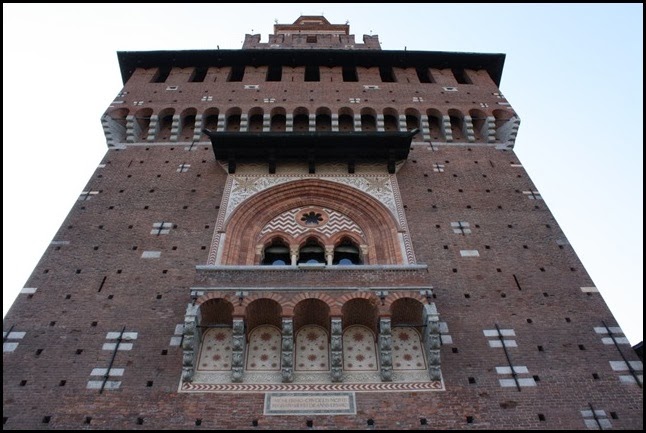 It was Beltrami who restored the beautifully decorated Filarete Tower, featured above, which is visible across the whole city of Milan. He based his design on 16th century drawings. He also restored the rounded corner towers Torrione di Santo Spirito (also pictured above) and Torrione dei Carmini whose upper levels had been removed by the Austrians who needed open space for their artillery.

Today the Castello Sforzesco is a quadrilateral built around the Piazza delle Armi. It is home to several art galleries and museums including the Pinacoteca del Castello Sforzesco, the Egyptian Museum and the Museum of Ancient Art which we visited. 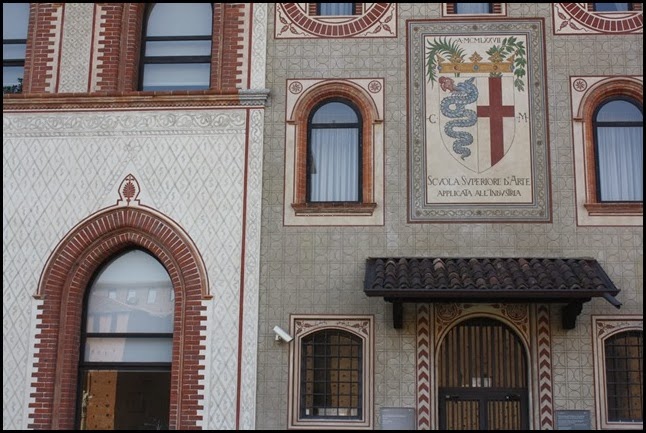 What impressed me most about the fortifications of Castello Sforzesco was the intricate detail in the brickwork, mosaics and murals. I loved the decorative tile work featured above and the outer fortifications looked like fine lace to me. This really is one of the prettiest and best restored castles I have visited before. 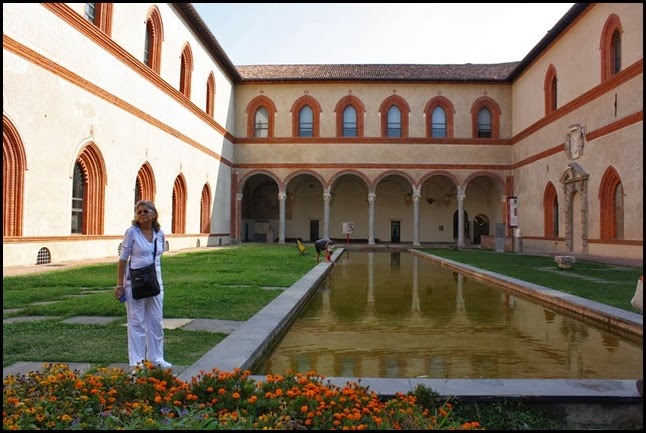 The Ducal Courtyard or Corte Ducal is beautifully kept and once again a place of calm and reflection. Napoleon’s dormitories and barracks are a distant memory a last. 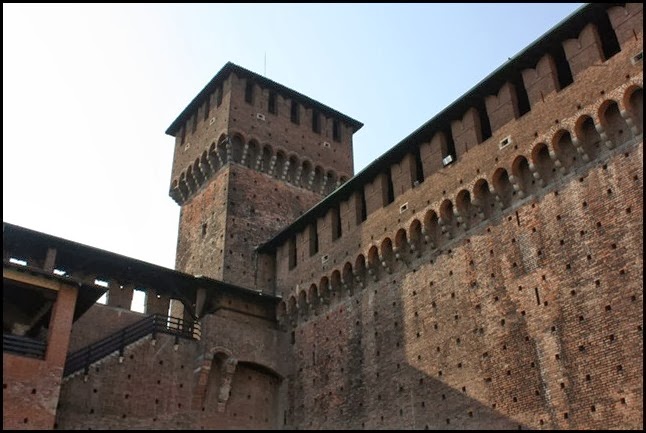 Next: Five Treasures of the Museo D'arte Antica.  I’ll take you inside the Ducal Courtyard to the Museum of Ancient Art where we discovered treasures by both Michelangelo and Leonardo da Vinci.