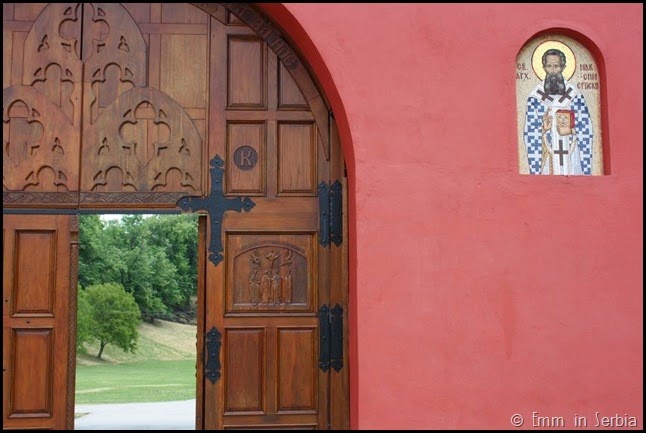 When we were planning our time in Serbia, my friend Aleksa asked me what I wanted to do during my time there and I immediately knew my answer. “I want to eat lots of Serbian food”, I said, “visit some monasteries and spend as much time with my friends as possible”. He was pleased because he could help me with all three.

But visiting the monasteries was not without its controversies.

Serbia is primarily an Orthodox country and the church is important from a religious, cultural, historical and political standpoint but just like in any country with a strong, established religion, there are those who feel that the church aids in the oppression and exploitation of vulnerable communities. One of my friends decided not to join us on our excursion to the monasteries on these very grounds, citing a prominent patriarch who had blamed the recent catastrophic floods in Serbia on the fact that Conchita Wurst won the Eurovision song contest.

I completely understood and respected my friend’s point of view.

It was interesting because it made me examine my reasons for wanting to visit the monasteries. I am interested in both history and politics and have, for example, read up on Byzantium and the rise of the Orthodox church in order to understand relations in Europe during that period. I will often visit churches, synagogues and mosques in foreign countries because I find that it helps me to understand the history and architecture in a country. 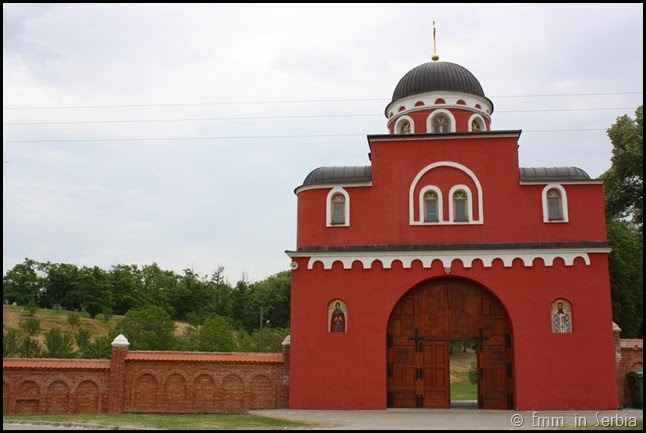 I was also aware of the religious aspect of the difficult history of the Balkans and how it fed into the conflict in both the Second World War and the conflicts in the 1990s. In short, I knew just how important the Orthodox Church is to Serbians and I wanted to see the monasteries for myself. Little did I know what an emotionally wrought day it would turn out to be.

I have never seen anything like I saw in that church that day. Every inch of space on the walls, ceilings, arches and columns was covered in depictions of saints and important holy figures. The paintings are extremely old, some dating back to the 1500s, and they are badly in need of restoration.

The lighting in the church is kept to a minimum, to prevent further damage to the paintings and when the patriarch bent down to show us the age of a piece of work, paint and mortar crumbled away to the floor. It was painful to see and no doubt painful for the patriarch to experience. 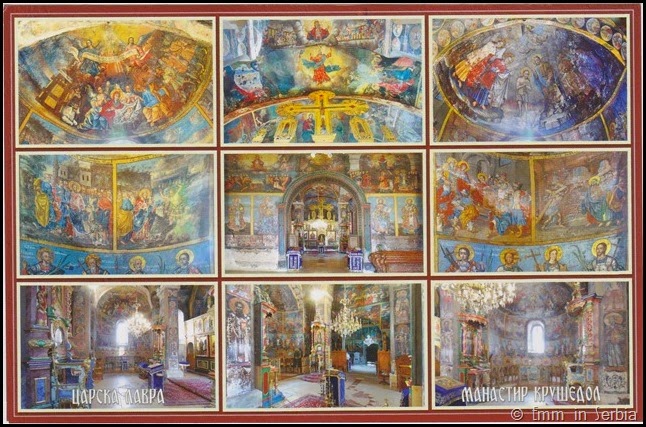 For obvious reasons of conservation, there is no photography allowed inside the church and this is the reason I’ve included the post card above. Perhaps it would help to click on the postcard to view an enlargement.

I was able to take some of the outside of the church, depicting artwork from perhaps the last restoration in 1750.

The monastery was a quiet place, certainly a place of reflection and while my friends lit a candle and prayed, I observed the patriarch in a moment of peace. Well, to be fair, he was peaceful until he spotted me taking his photo and so I quickly put my camera away. 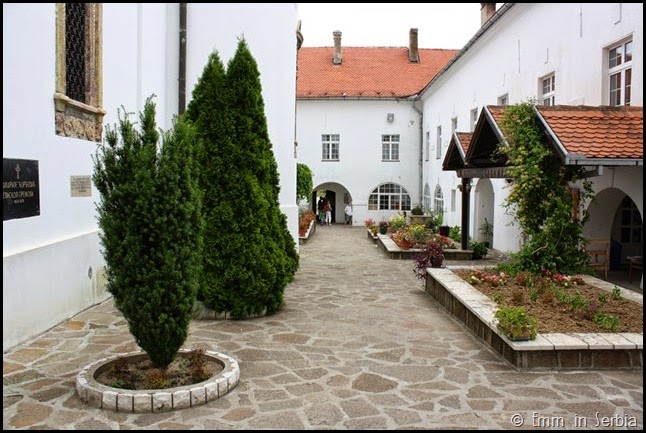 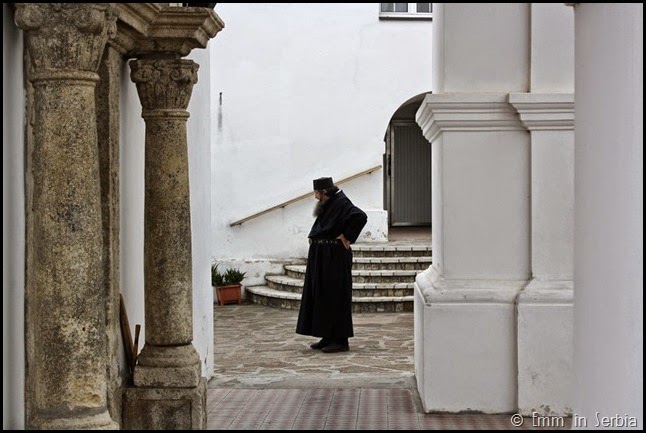 After visiting the church itself, we decided to walk around the grounds. Krušedol is a self-sustaining monastery and the monks grow all of their own food, plus they own pigs and chicken too. I had a bit of a moment when I came face to face with a cherry tree. I had never seen a cherry tree before and assumed that they grew on smaller bushes like tomatoes or strawberries! We ran into another patriarch and a young monk and they encouraged me to help myself to a cherry. Oh my word, I can’t express how divine they tasted! 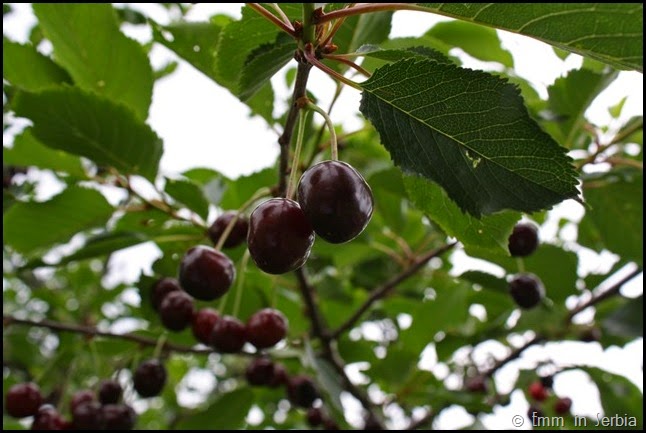 I followed this up with a drink of water from the miraculous underground well. It tasted chalky and strange as it is full of minerals but it is said to have healing properties.

We knew that we had another two monasteries to visit before lunch that day and so it was with some reluctance that we made our way back to the entrance and towards the Velika Remeta monastery. 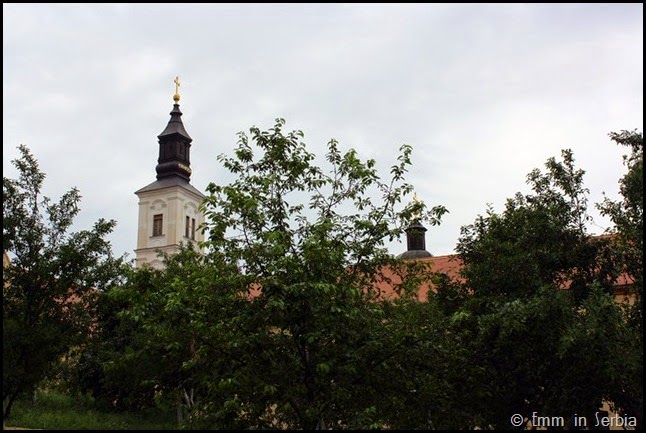 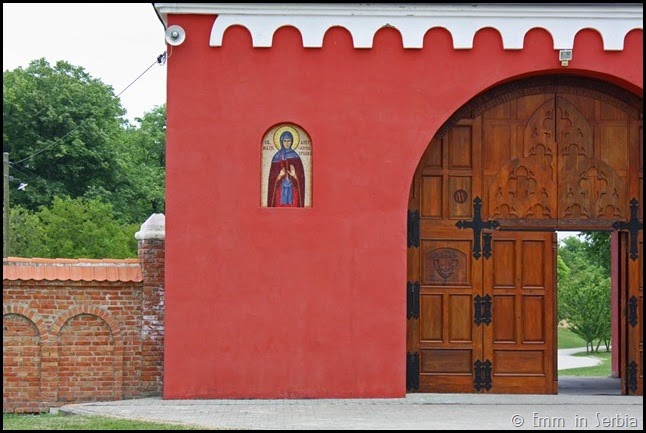 Have you ever visited a place that was considered controversial or unfavourable by your friends and family? What were your reasons for doing so?