A Bicycle Tour of Soweto 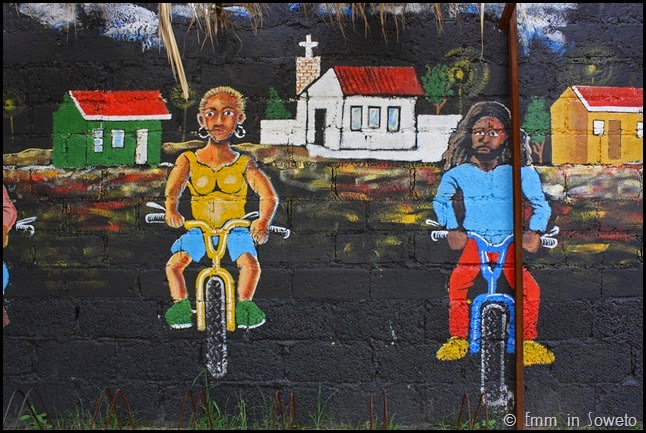 I grew up in Johannesburg, and I admit that like any future expat who dreamt of living and working abroad, I often took my hometown for granted. Over the past eight years, I’ve made a concerted effort to rediscover Johannesburg and am proud to say that I’ve seen many of the sights.  Nevertheless, it becomes increasingly challenging to find new things to do and I was thrilled when my gorgeous friend Jeanette recommended Soweto Bicycle Tours.

While many visitors to South Africa focus on our fantastic cuisine, incredible wildlife and unparalleled luxury, a Soweto Bicycle Tour is highly recommended if you are interested in our history, urban culture and indomitable spirit. The tour will take you off the beaten path and show you a side of South Africa you wouldn’t necessarily see and you get to sample traditional food and drink while learning about the struggle and Apartheid.

Soweto is a massive urban area south west of Johannesburg. The name is in fact an abbreviation for ‘South Western Townships’ and was designated by the Apartheid government as a racially segregated area where the black working class could be relocated after forced removals from areas such as Newtown and Sophiatown. Soweto was home to Nelson Mandela and Archbishop Desmond Tutu and it is known as the seat of anti-Apartheid activism and the setting for the 1976 student uprising.

I don’t think the architects of Apartheid could ever have predicted the resilience of strength and spirit that would come to characterise modern day Soweto. Today you will visit Soweto to sample traditional beers and food, to learn about Sowetan culture and music and to visit some of the historical sites that helped make Soweto what it is today. Make no mistake, twenty years after the fall of Apartheid, it is clear that the South African government still has a lot of work to do and Soweto remains one of the most impoverished and disadvantaged areas in the country. I hope that my photos can reflect some of this. 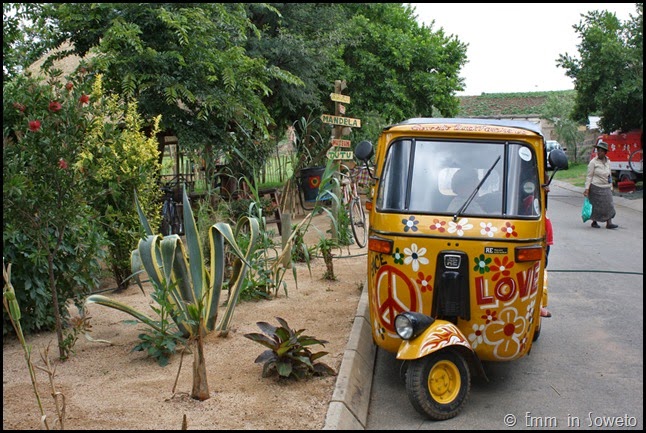 Firstly, let’s get something out of the way. I’m sure you’re all massively impressed that I signed up for a bicycle tour in the first place given that the most active thing I ever do is walk but honestly, there is no need to be. What we actually signed up for (and paid half for ahead of time) was a 4-hour Soweto Tuk Tuk tour but when we arrived at Lebo’s Backpackers Lodge, it turned out that they had forgotten to check their system for bookings from the previous evening and thus no drivers were available. Definitely make sure you phone ahead to confirm your booking before travelling 50km across Johannesburg (details below).

And so it was that I got on a bike for the first time in twenty years and went on a two-hour cycle tour of Soweto. I have to admit that after the first five minutes and a slight incline, I thought that I wouldn’t be able to do it but the tour is designed for people like me and there are frequent breaks to rest and look at the scenery.

In the distance below you can see Orlando Towers – the towers I jumped off two years ago to cure myself of my fear of heights. 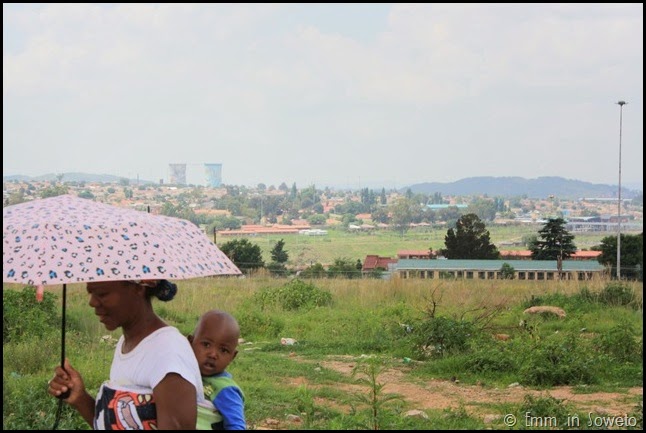 The first stop on our tour was perhaps the most poignant for me. When I went to university in the early 90s, one of my key areas of study was the violence taking place across South Africa at the time. One of the most unstable areas was in the hostels, vast single-sex institutions where migrant workers lived in appalling conditions. This was the first time I had been inside a hostel and the echoes of the past raced through my mind as we stood there. 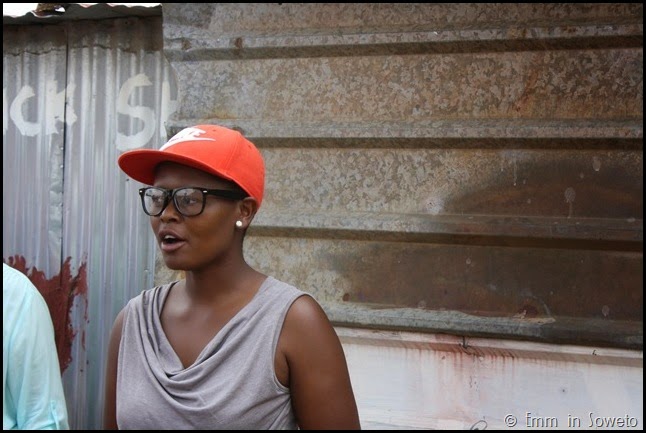 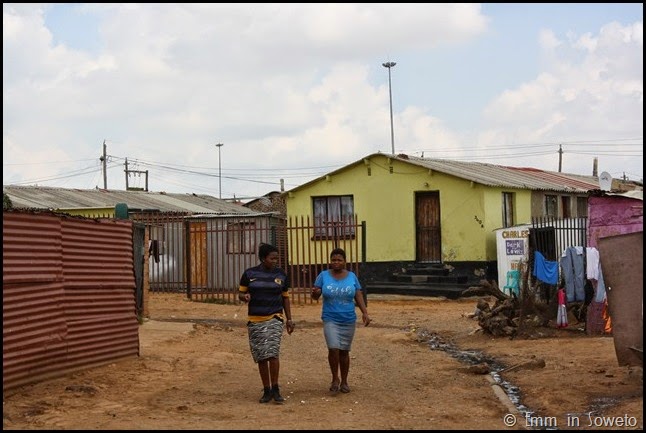 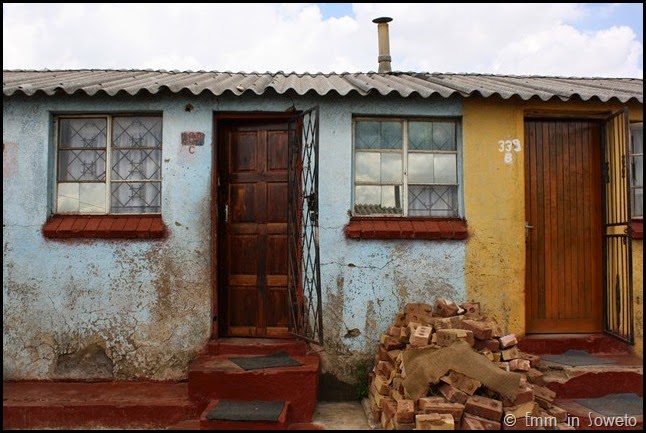 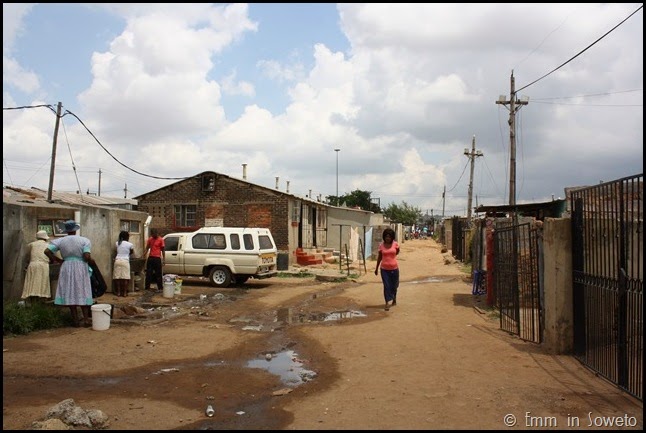 At the end of Apartheid, hostels were torn down and families began to move in to these areas and establish informal and semi-formal settlements. Conditions are not great today and these houses do not have running water or sewerage. Our tour guide Ntando explained to us that there is one set of latrines and washing facilities for every six to eight families. The families co-operate with one another to take turns to clean and maintain the facilities. 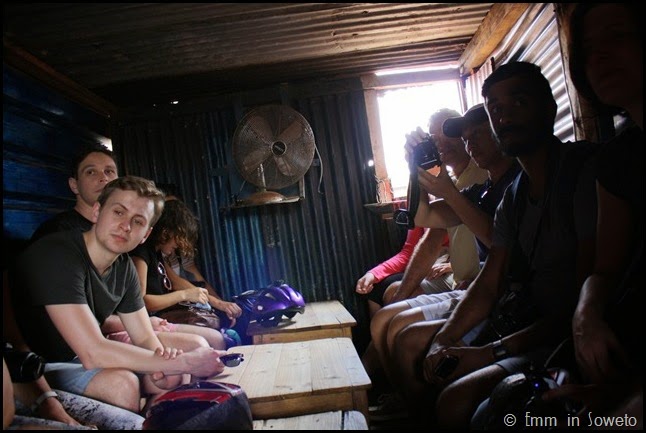 While in Mzimhlophe, we visited a shebeen where we sampled traditional beer and everyone but me ate traditional meat cuts such as heart and lung. We passed around a giant calabash and sampled some traditional beer which tasted like fermented sour milk. I didn’t like it but can see how it could become an acquired taste.

Shebeens were originally unlicensed drinking establishments that arose because Apartheid laws prevented black people from owning or entering drinking establishments. They form a very important part of South African culture today and the photo above shows you how people sit together side by side to drink. The spirit of ubuntu and oneness is very important in South African culture. 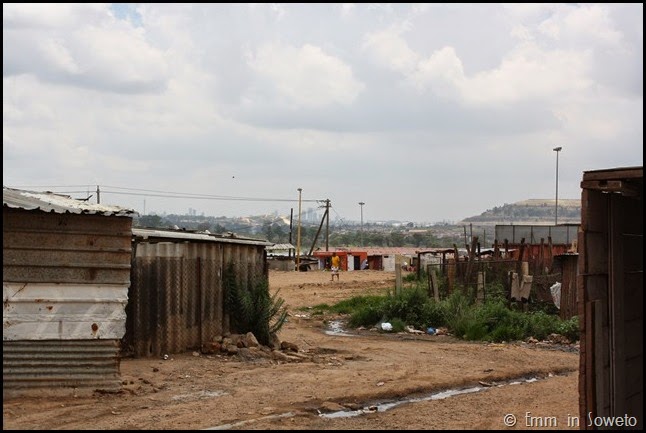 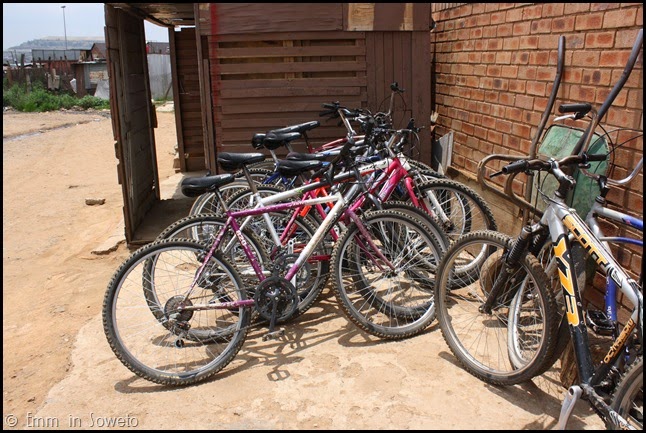 All too soon it was time to get back on our bikes again. On our way out, we passed a newly constructed apartment complex. Our guide mentioned that the flats were being built to provide dignity to the citizens of Mzimhlophe and would be ready for occupation early in 2015. I can’t begin to explain how very sad this made me. In my head I know just how many RDP houses the South African government has built since 1994 – about 3 million to date – but it seems that progress has come awfully late to this area of the world. 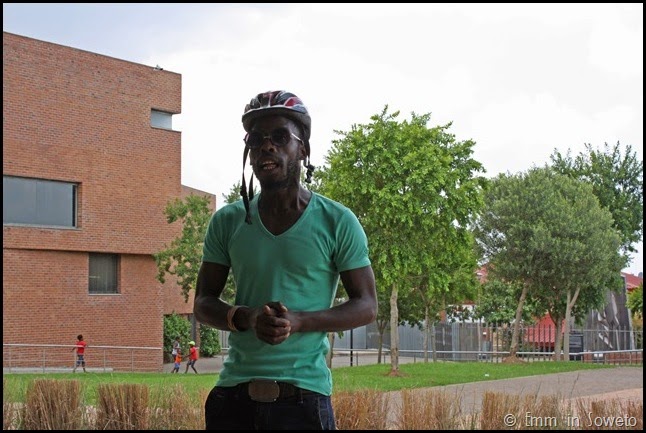 Our large group split after Mzimhlophe and the four-hour cyclists took off on a different route. At this point Jazz took over as our guide and the first place we visited was the Hector Pieterson Memorial and Museum. This museum marks the events of 16 June 1976 when school children took to the streets of Soweto to protest against the Afrikaans Medium Decree of 1974. This decree forced black school children to take half of their subjects in Afrikaans, a language that many of them did not understand. Shots were fired on that day and Hector Pieterson was one of the first children to die. What began that day was the Soweto Uprising and between 200 and 600 people died in the violence in the following days. (Do click the link above for more information). 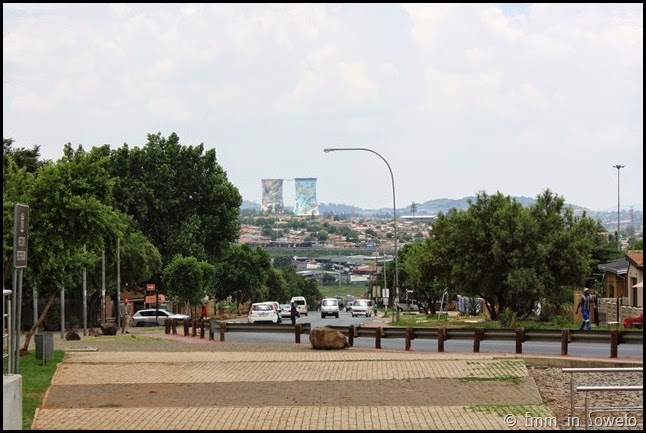 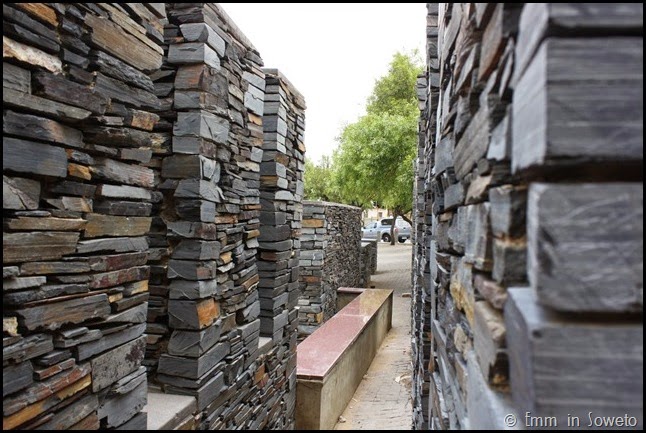 This is the memorial to those that died in the Soweto Uprising. I would highly recommend a visit to the museum, if you ever get a chance. It is an excellent multi-media display featuring photographs, audio and video recordings, first-person testimonies and background into the events both leading up to and following the events of 16 June 1976. I won’t say it is an easy museum to visit - the first time I visited the museum back in 2012, I was so moved that I was unable to talk for two days afterwards. Entrance to this moving exhibit is only R30 or about £2. 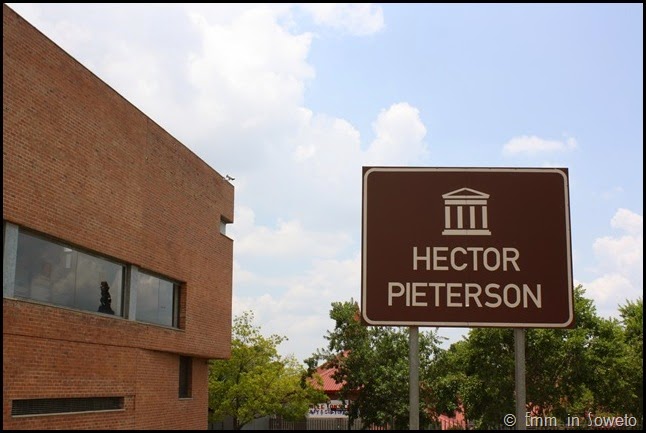 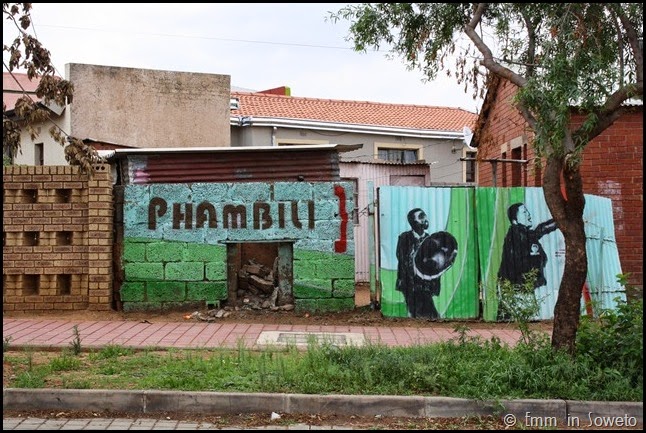 As we rode on, we saw many instances of street art and installation art along the way. The photo below depicts the events of June 16 where a police man and dog faces the crowd of school children. The police dogs were later set free to attack the crowd of children who responded by stoning them to death. 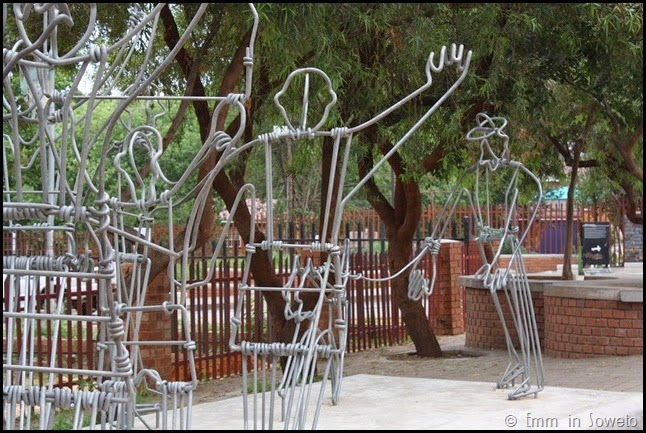 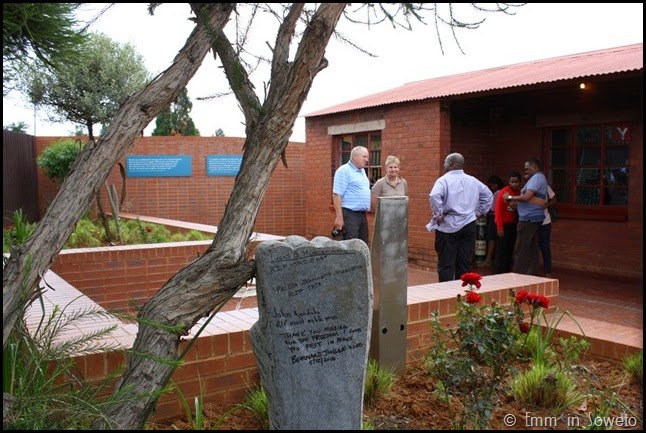 Our next stop was 8115 Vilakazi Street, better known as the former home of Nelson Mandela. He returned to live here on his release from prison in 1990 before moving to his presidential house in Houghton when he was elected. Today it is a museum and you can visit Mandela House for between R40 (AU residents) and R60. 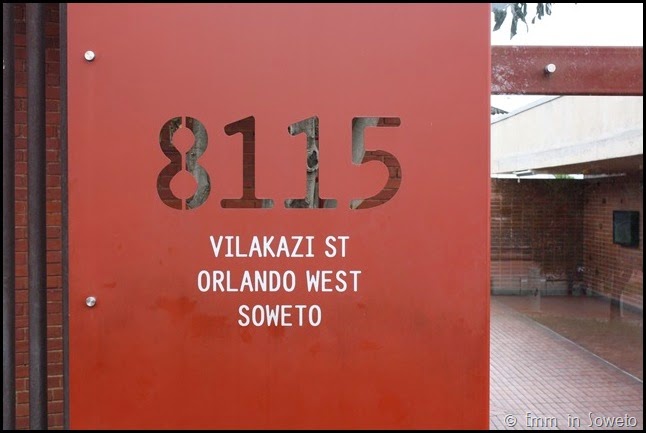 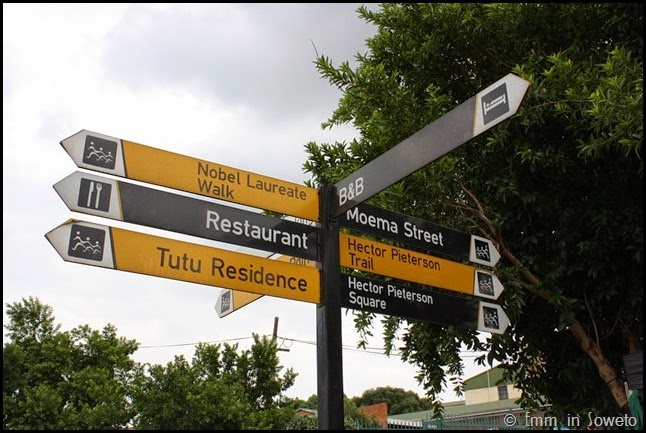 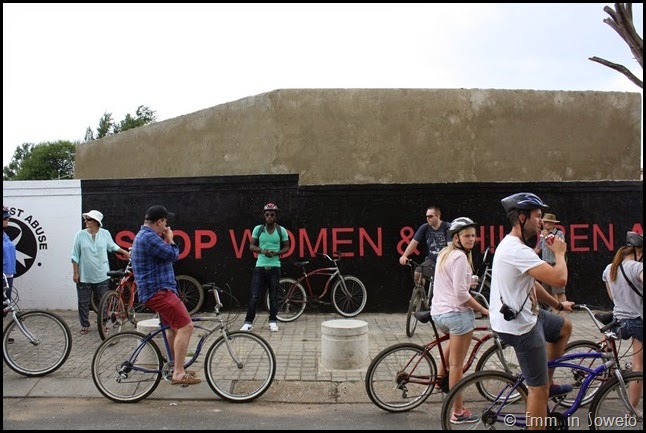 The final stop on our tour was a visit to the home of Archbishop Desmond Tutu who still resides around the corner from Nelson Mandela’s old house. The house looks very much inhabited so I decided not to take a photograph of it but I really liked the mural on the wall opposite which is against abuse of women and children. 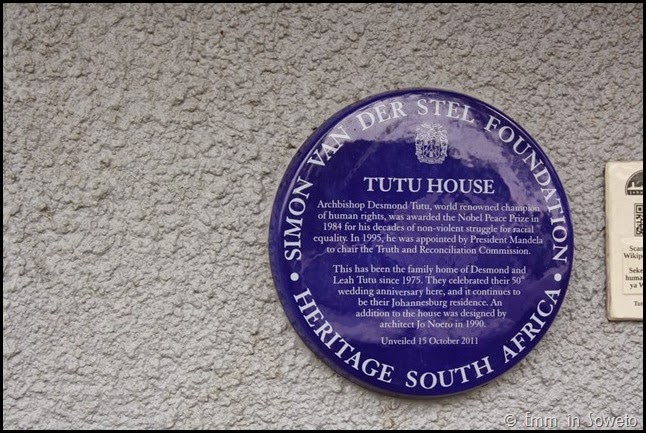 The last stretch home was the most difficult for me and I have to admit that after over 2.5 hours on the road, I walked much of the last mile back to the hostel. Still, that is not bad going at all for someone who had not been on a bike in twenty years. Actually, I think my last bike ride was in 1987 now that I think of it. 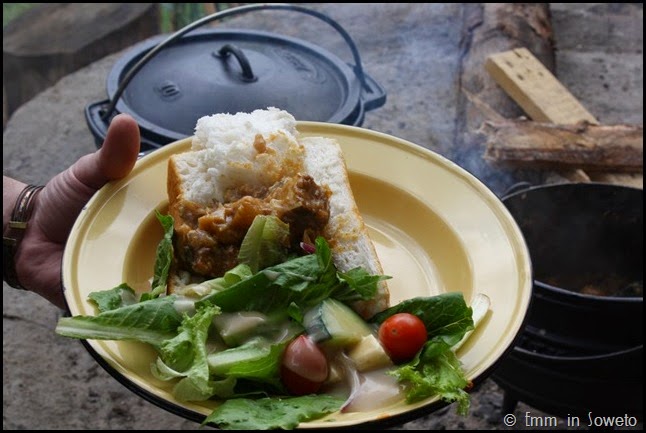 We returned to Lebo’s Backpacker’s Hostel where we were treated to a delicious lunch of bunny chow. Bunny chow is a traditional South African meal where you hollow out half (or in this case a quarter) of a loaf of fresh bread and fill it with a stew (or curry if you’re in Durban). I opted for the vegetarian option which was cooked to perfection in a potjie on an open fire. You can just see the potjie in the photos above and below – it is a cast iron pot that looks like a witch’s cauldron. 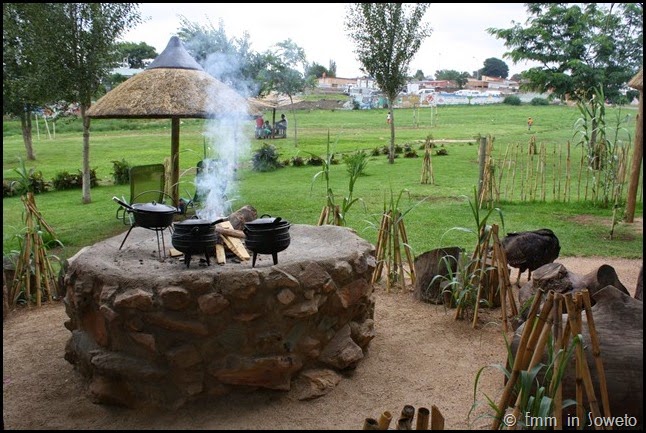 Despite the mix up with our booking, I would absolutely recommend the Soweto Bicycle Tour and would certainly do something like this again. We saw so much on the tour and learned much more than I could capture in one blog post!

I’d like to thank our excellent guides Ntando and Jazz for their detailed, fascinating and inspired guiding. These guys are really talented and I see a great future for them all.

The prices and details for the tour are as follows: