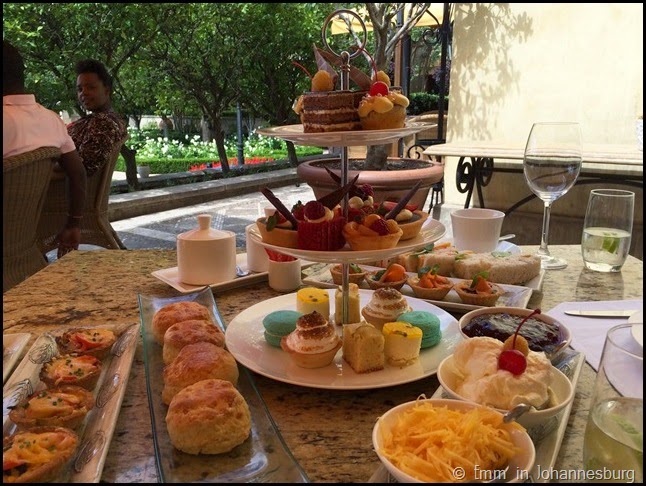 South Africans are inherently curious about the concept of afternoon tea, so it is a wonder that they don’t partake in this wonderful activity more often. My friends and family wanted to know all about my experience at the Palazzo Montecasino and on seeing the photo above, the response was inevitably, “how many people was that for?”

Well, the spread above was for two people (this elicited gasps from my audience) but I can tell you that what you see above is not the whole meal and I would have needed a wider angle lens to capture my gluten-free sandwiches on rye bread. It also cost us £11 per person. 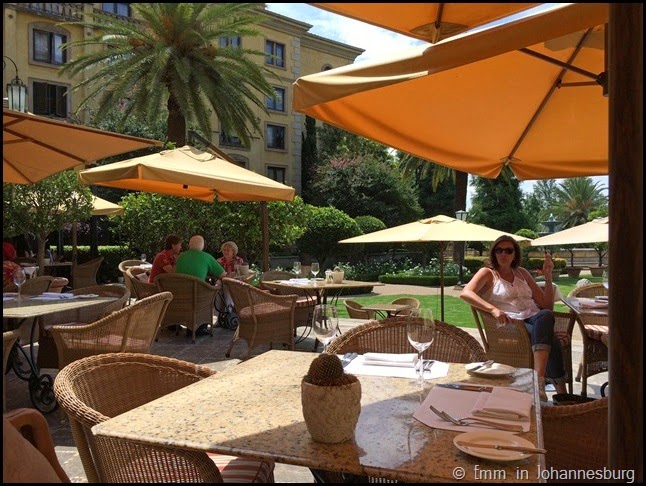 Let me tell you a bit more about our afternoon tea experience. I was joined by my dear friend Sarah on a very hot summer afternoon. We sat in the shade on the terrace of the Palazzo Montecasino Hotel while the sun beat down on the gardens beyond. Sarah and I have known each other for over 20 years and after studying together at university, we travelled to London to see as many bands as we could see at Glastonbury and Reading. Needless to say, we always have a lot to catch up on and so you’ll have to excuse me for not actually taking photos of my sandwiches.

Usually, an afternoon tea is served on a three-tier platter with sandwiches on the bottom, scones in the middle and pastries on top. The remarkably generous afternoon tea at the Palazzo Montecasino consisted of a plate of sandwiches and a plate of savoury tarts each, a plate of scones to share with lavish helpings of jam, cheese and fresh cream plus an entire three-tier stand of desserts. It was a lot of food but I can confirm that Sarah and I valiantly made our way through most of the food and ensured that we had at least one bite of absolutely everything. We also couldn’t move for several hours afterwards.

When we booked our tea, we were advised that the hotel would be able to assist us with some of our special dietary requirements but not others. In this instance, that meant that I would not be served salmon (to which I am allergic) and that my sandwiches would be gluten-free but that the scones and sweets would not be. This is in fact not unusual in Johannesburg with many establishments not catering to gluten-free diets at all. Hopefully over time this will change. On this occasion I didn’t really mind because it is bread disagrees with me the most but the higher fat content in pastries actually makes them easier for me to digest.

I really enjoyed my rye bread sandwiches, especially the cheese and tomato and chicken mayonnaise ones. The rye was very moist and not at all dry and I was relieved to take a break from the standard sandwich options that we receive for afternoon teas in London.

The cheese and tomato spinach quiches were also delicious and Sarah said that her salmon ones were too. 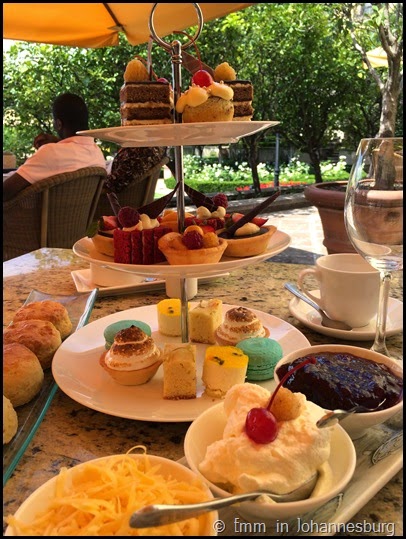 It may seem a little unusual to see cheese and fresh cream served with the scones but this is how they are served in South Africa. In fact, it was quite a leap of faith for both Stephen and I to eat clotted cream during our first afternoon tea experiences but I am happy to say we are both converted now. Nevertheless, the scones were perfect – slightly crispy on the outside and as fresh as could be on the inside.

During our meal, the executive chef Phumlani Shongwe came to chat to us. He explained that he had worked at Sun International before moving to the Palazzo a year ago and that he had served under top international chefs to learn his impeccable pastry skills. Phumlani wanted to ensure that the afternoon tea met our expectations and we ensured him that they had far exceeded them! 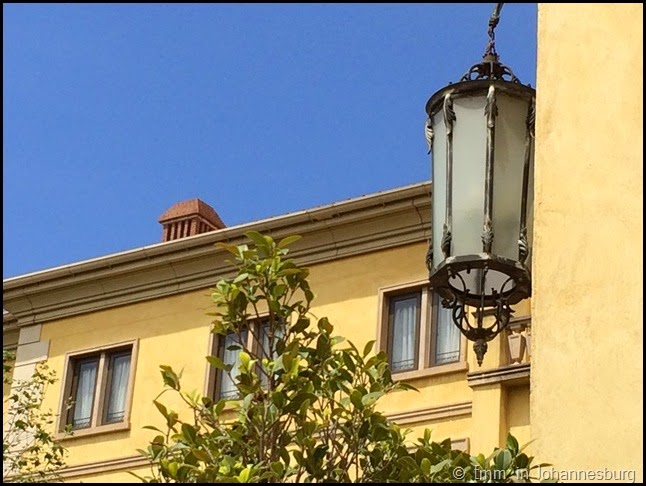 I’ve always said that it is the sandwiches, scones and tea that draw me most to afternoon teas but on this occasion, the pastries and desserts were incredible.

I’m hesitant to pick favourites as everything was so good but everything on the second tier was amazing. The custard and fruit tart was delicious as was the chocolate tart. We picked up a hint of mint or liquorice in the chocolate tart which was very subtle but very, very nice. We initially though the cake in the foreground to be red velvet cake but it was more of a raspberry chocolate cake and it was the best thing I tasted all day. 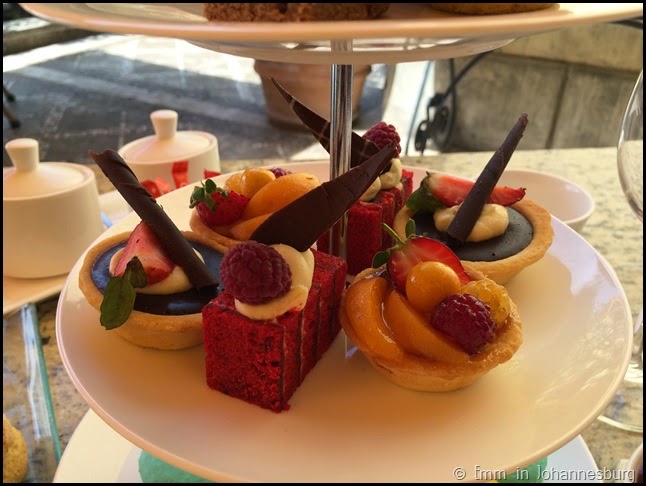 On the bottom tier, I really enjoyed the granadilla cheese cake and the lovely, moist apple cake. We left the top tier until last, correctly predicting that we would be very full by the time we reached it, but even so we were able to appreciate the delicious vanilla cake with the cherry on top. I was very sad to observe, however, that Sarah doesn’t eat the edible silver balls and picked hers off her cake. If I’d discovered this 20 years ago, we might not have become friends. 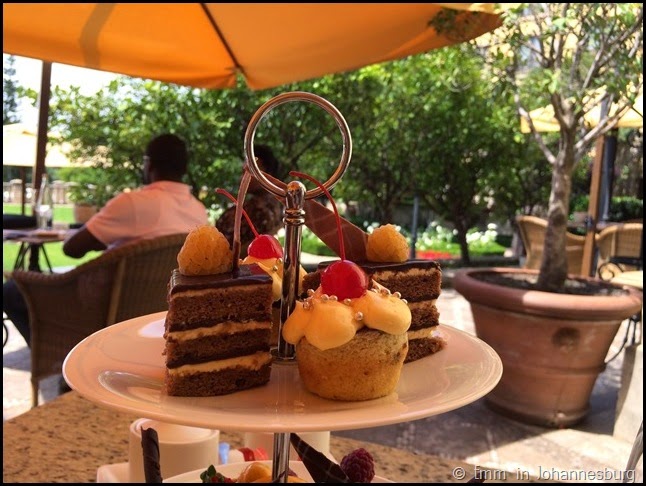 While the tea wasn’t a visible focus of the afternoon tea offering, we were able to have a choice of teas during the afternoon which I greatly appreciated. Sarah had Earl Grey tea and I started off with rooibos tea, to celebrate being home in South Africa, followed by a green tea to cleanse my palate during the sweets. We also had a lot of water to cool us down while temperatures soared to over 30°c.

We had a fantastic time at the Palazzo Montecasino and were able to chat for well over three hours. I will definitely return one day when I am in Johannesburg again. I would highly recommend the afternoon tea and give my compliments to Chef Phumlani Shongwe!

After our meal, we took a much-needed walk around the grounds and interior of the Palazzo Montecasino. I have only stayed here once when I was given a night here as a wedding present but it is just as beautiful as I remembered. 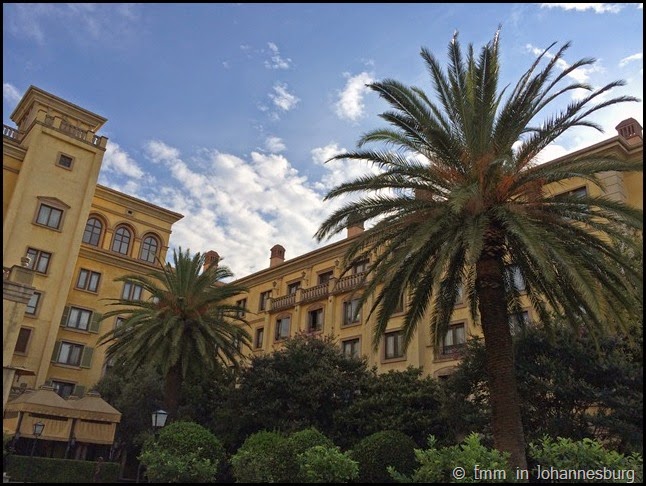 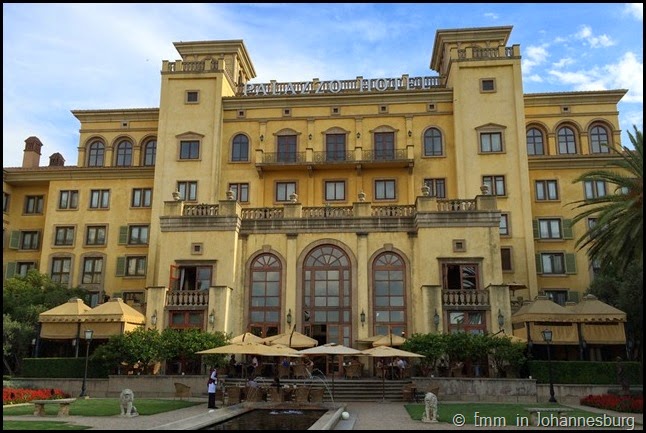 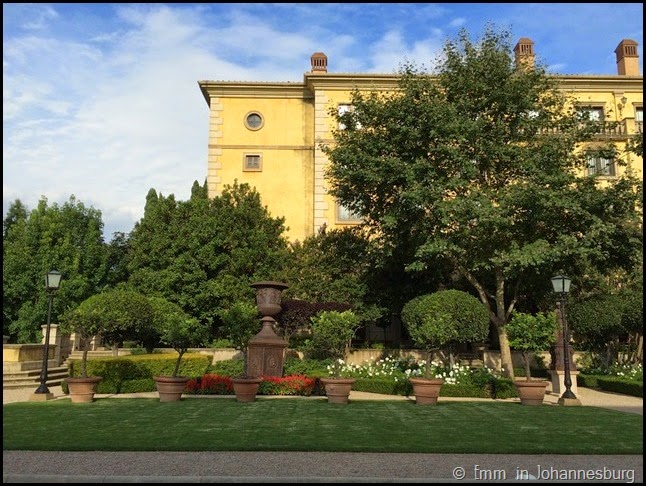 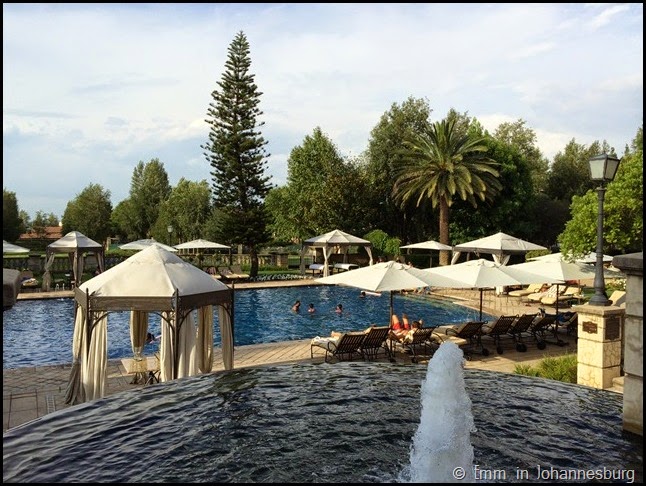 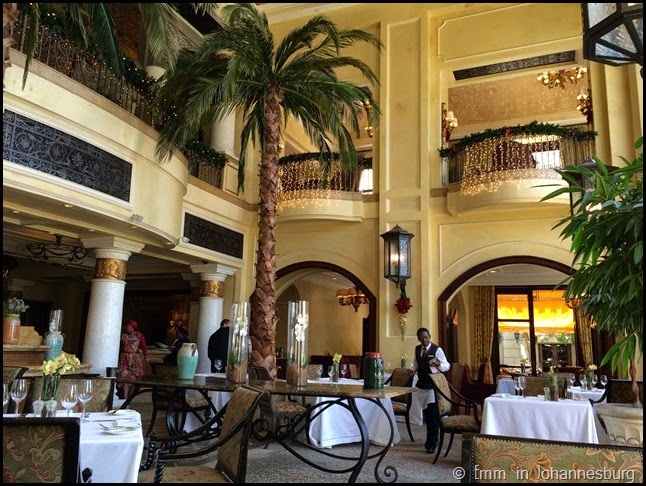 Cost: currently R195 per person (about £11) – booking and prepayment essential