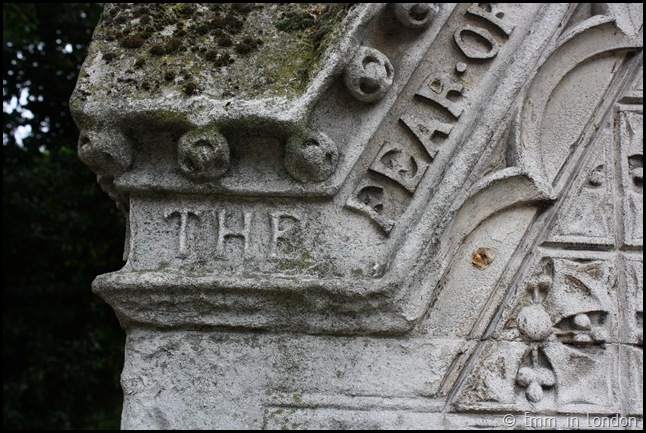 Each year in June, London hosts the Open Garden Squares Weekend. For one weekend, the gates open to the city’s secret and hidden gardens and members of the public can wander their green spaces. This year my friend Yannick gave me a ticket for the event and so with a minimum of preparation, I decided to stroll around and see what I could find. 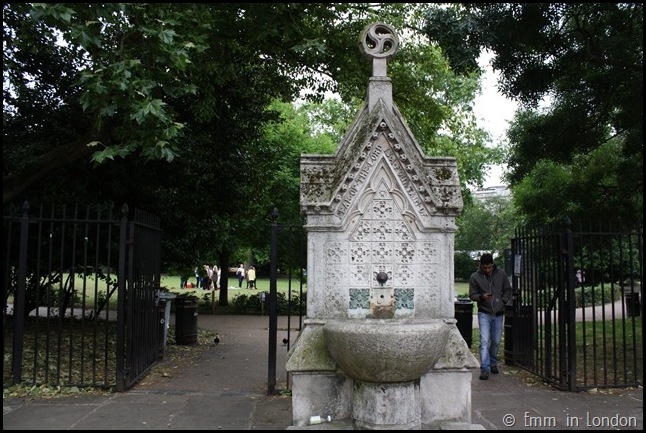 My first quest was to try find Lincoln’s Inn Gardens at the south east corner of Lincoln’s Inn Fields. What I love most about these adventures is that I find myself really looking at my surroundings as opposed to simply walking through them. I’ve also learned that adventures don’t always end up as planned but that is also okay.

I loved this fountain – the inscription reads “Fear of the Lord is a Fountain of Life”. Lincoln’s Inn Fields is an enclosed square garden and was designed by Inigo Jones in the 17th century. 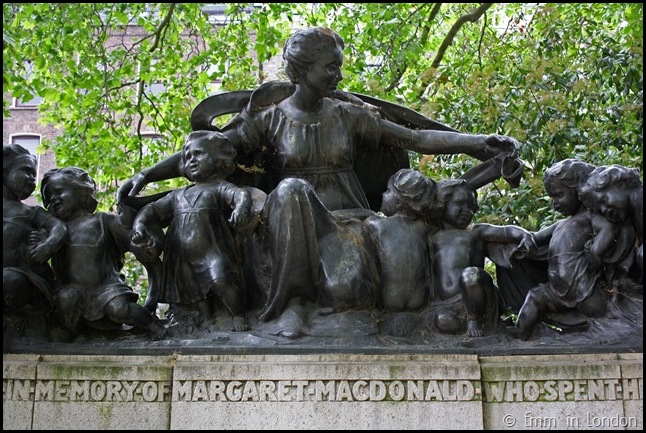 I went to what I was sure was the south east corner of Lincoln’s Inn Fields and didn’t find any hidden gardens and so I approached the guard at Lincoln’s Inn to enquire where they might be. Lincoln’s Inn is one of the four Inns of Court in London where barristers have their offices and is definitely not usually open to the public. The guard informed me that the gardens were situated inside Lincoln’s Inn but that I had arrived on the wrong day!

I decided not to argue the point of Open Garden Squares Weekend with the guard seeing that I had actually visited once before on A Secret Visit to Lincoln's Inn, Holborn. 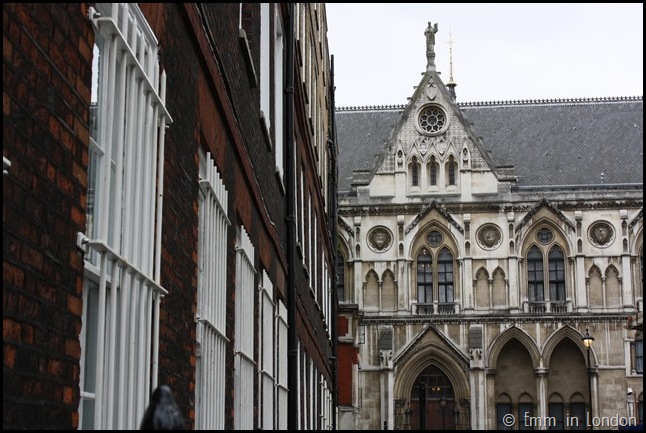 I decided to walk through Holborn towards the Royal Courts of Justice to see if I could access Temple. This is one of my favourite areas of London and I just love all the Gothic Revival buildings. 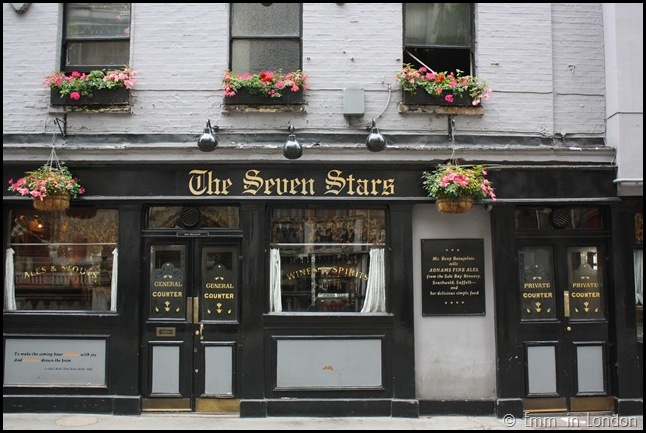 Below are the Royal Courts of Justice which houses the High Court and Court of Appeal of England and Wales. I think they look like a fairy tale castle and I’m simply unable to walk past them without taking tons of photos. 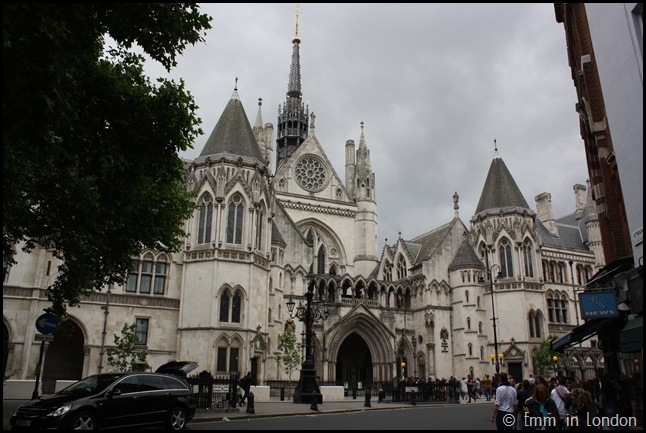 After taking this photo, I turned around and walked down Essex Street and down the steps to Victoria Embankment. I was hoping to sneak into Temple but the side gate looked as foreboding as ever. Like Lincoln’s Inn, Temple is notoriously closed off to the public. I did once walk through Temple, I was dressed very smart and walked quickly and with purpose and none of the guards paid any notice to me. They would have done so if I’d tried to take photos though! 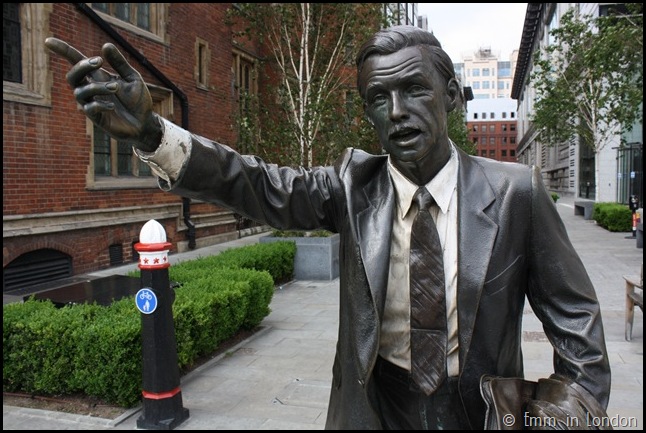 Slightly frustrated at the state of my adventure, I walked along Victoria Embankment toward Cannon Street Station. I took a moment to chat with J Seward Johnson’s 1963 bronze statue “Taxi” and I saw the World Naked Bike Ride speed past and then I was on my way. My next stop was Cleary Gardens and it was an absolute treat. Cleary Gardens is open to the public all year round but I can’t tell you how many times I have walked right by the site in the past without realising that there is a garden here. 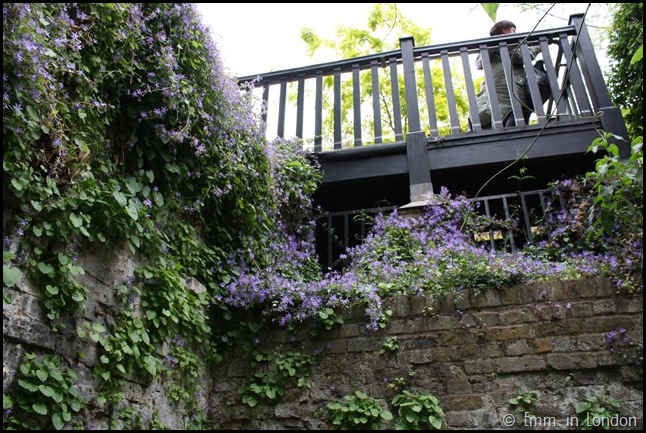 Cleary Gardens is named after Fred Cleary who was instrumental in planting trees and creating green spaces in the City of London during the 1970s. 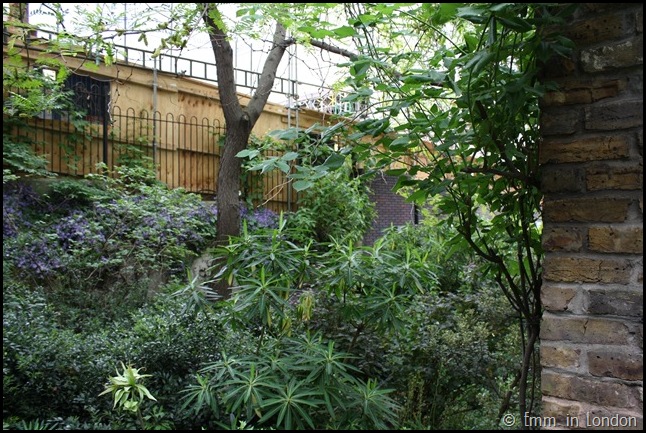 The garden is spread out over three tiers with ample space to sit, read a book and relax. 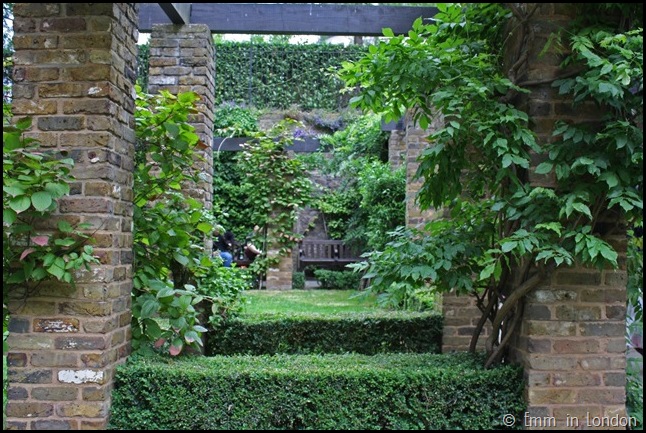 Cleary Gardens stands in a site that is rich in culture and history. The lawns cover the site of a Roman bathhouse and the vines on the terrace mark importance of this area in the City’s wine trade during medieval times.

The Rooftop Garden at Nomura International

My final destination for the day was the rooftop garden at Nomura International. The first thing you will notice when you enter the roof terrace is that it offers incredible views over London. In this photo you can see the Shard and Southwark Cathedral to the right. 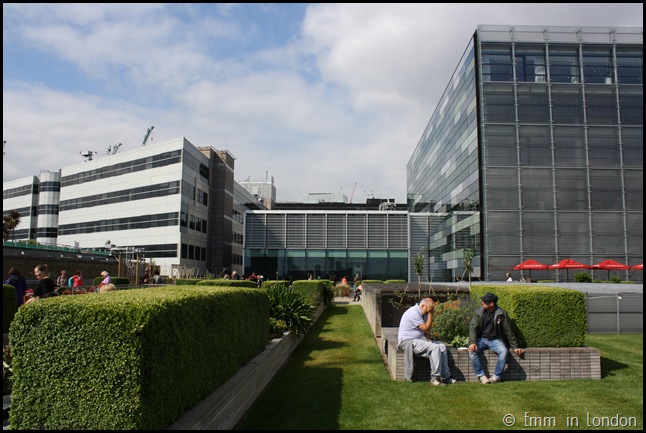 The gardens were created by staff at Nomura International. Each day, before work and during their lunch hours, they work in the gardens and have created the most beautiful, tranquil place. 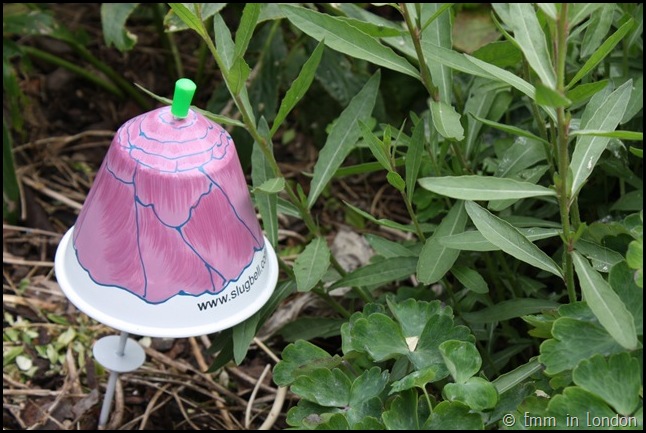 I chatted to one lady from Nomura and she took me through some of the features of the vegetable gardens. There are slug bells to chase away the slugs and plastic CDs that catch the light and chase away birds. All rather ingenious if you ask me. 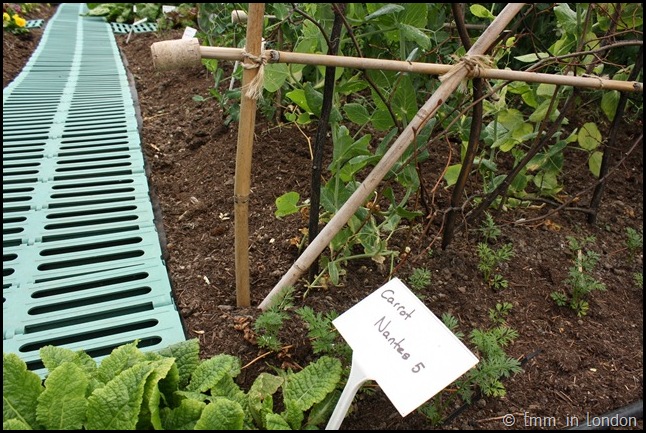 Most importantly, the gardens provide relaxation for those tending them and a quiet place for the rest of the Nomura staff. 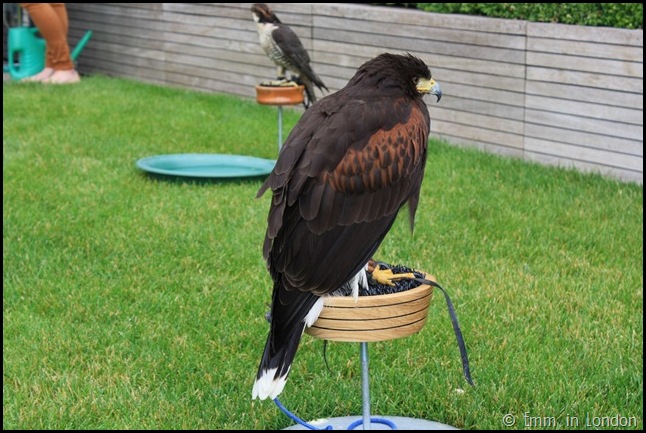 There was a falconry exhibition on the roof too that day. I waited a long time for one of the birds to remain still in order for me to take a photo! 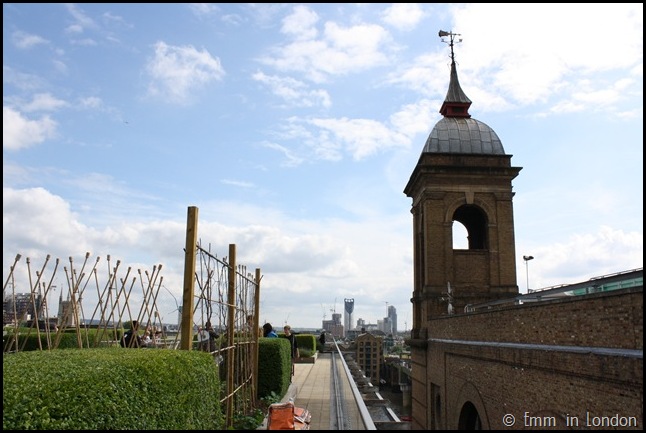 Then again, the gardens were so beautiful that I was quite happy to while away the time on a sunny afternoon. 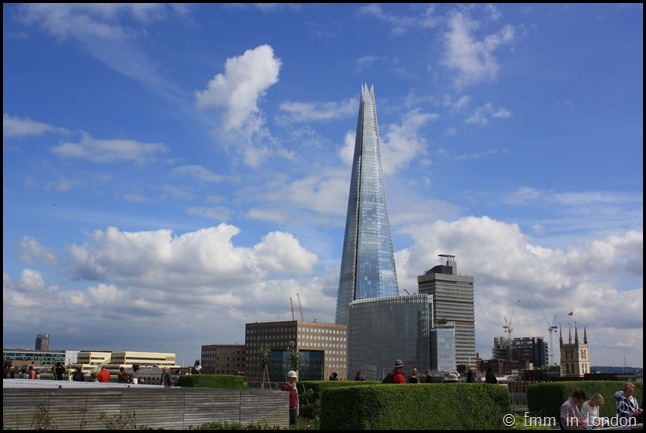 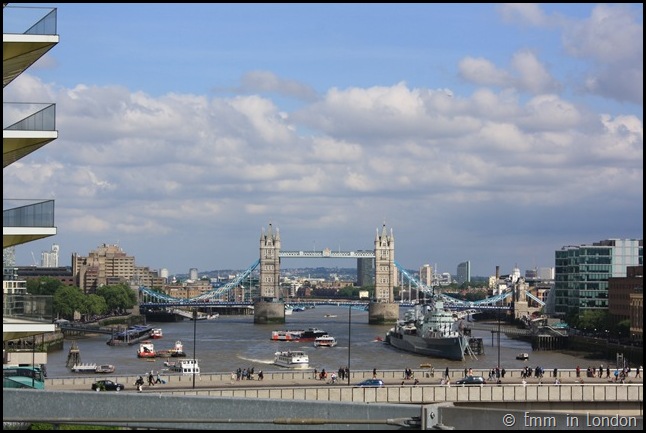 … and of Tower Bridge too.

All told, I’d say that my adventure was a success. I saw places that I wouldn’t normally see and I spent a glorious summer day strolling through London.

Open Garden Squares Weekend will return on 18-19 June 2016. Tickets cost £10 before the event and give you access to all participating gardens on both Saturday and Sunday.

Did you attend Open Garden Squares Weekend this year? Where did you explore?