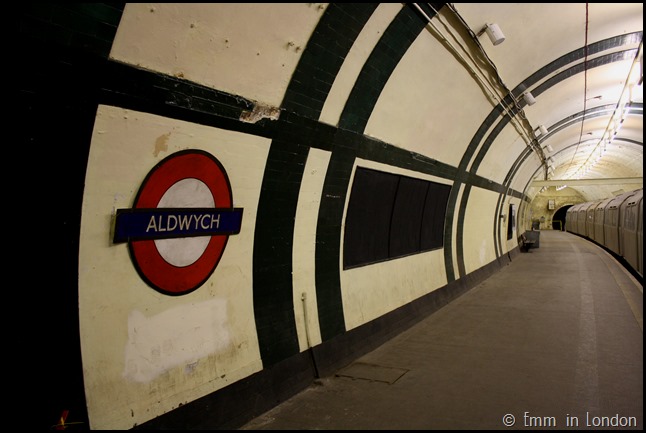 Today was one of those damp and rainy London days where you'd only leave your house if you had a very good reason to do so. Thankfully I had a very good reason indeed because today I did one of the things I've wanted to do for the longest time: visit the disused station of Aldwych on the Strand. I joined a Hidden London Tour organised by London Transport Museum and if I had to sum up the experience in one word, it would be exhilarating.

We met outside the entrance to Strand that I had walked past countless times before when I was working off Strand itself. Learning how Strand became first Strand Aldwych and later Aldwych was just one of the quirky things we'd learn about this ill-fated and underfunded station that ran from 1907 to 1994.

The History of Aldwych Station

Aldwych station came about at the meeting of two great organisations. Great Northern Railway wanted to build a new underground tube railway and London County Council wanted to redevelop the area around Strand and Kingsway which had not been redeveloped since surviving the Great Fire. Enter the slightly corrupt American financier Charles Tyson Yerkes. Known for his brutal business methods, Yerkes had a lot of money and would make the Great Northern, Piccadilly and Brompton Railway a reality.

Despite agreeing on their plans before the turn of the 20th century, it was sometime before a suitable site was found for the station. Eventually the North Strand Theatre was demolished to make way for the station and construction started in 1905.

It is ironic that a theatre was demolished to make way for the station when line was designed to give access to the area to theatre goers. There were such protests by actors and thespians that some say their ghosts still haunt the station!

Aldwych Station is a Leslie Green station. His stations are notable for their oxblood tiled exteriors,  two entrances and exits and seminar-circular windows above the station name. 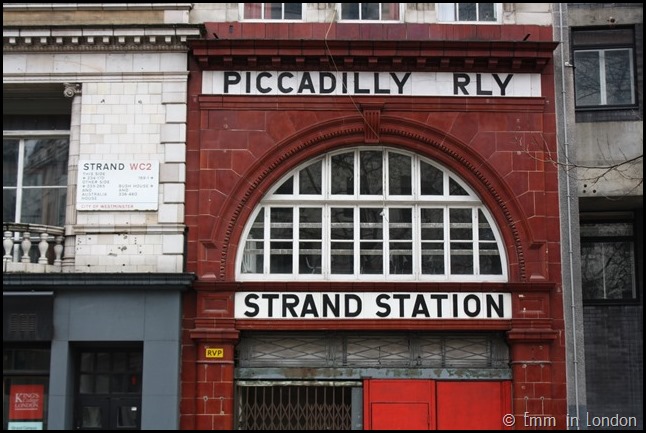 Running out of money at Aldwych

Despite Yerkes' money and Green's involvement, the station was plagued by a lack of money and ever-dwindling passenger numbers. For instance, three lift shafts were dug by hand but only one was ever commissioned and a passageway behind the lift shafts was dug out but never used. It was in 1907 that the station was renamed to Strand Aldwych when three stations in the area were renamed.

Aldwych During The War

Like many stations, Aldwych was used as a shelter during the air raids in both world wars. It is a little known fact that more people sheltered in tube network during the First World War than the Second World War.

Conditions on the platforms were pretty awful during the war. Cramped and overcrowded, passengers were initially made to use an ablution bucket set down behind a simple curtain.

The station was also used as a storage area for paintings from the National Gallery, ceramics from the British Museum and even china from Buckingham Palace.

Most notably, the Elgin Marbles were stored in Aldwych. They were lowered down by ropes and pulleys but transported out by train!

Now that you know all about Aldwych Station, I’ll take you along on our tour. 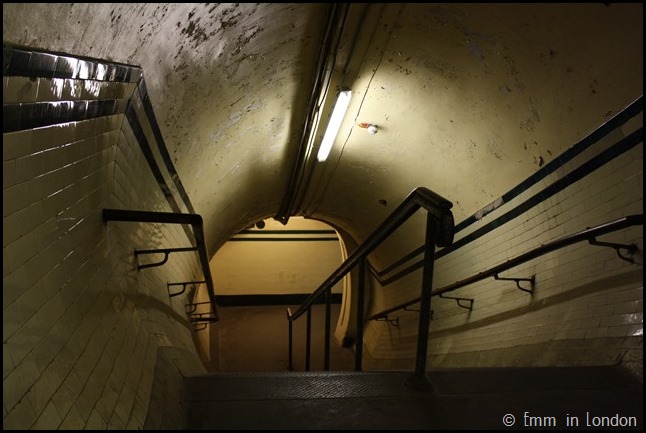 There were lots of stairs in the tour and in addition to the normal stairs you’d expect in a tube station, the lifts are not in operation and so there is a 160 step journey into the heart of the station. That is 160 steps down, of course… and then 160 steps back up again. At the time of writing, my legs are not speaking to me at all. 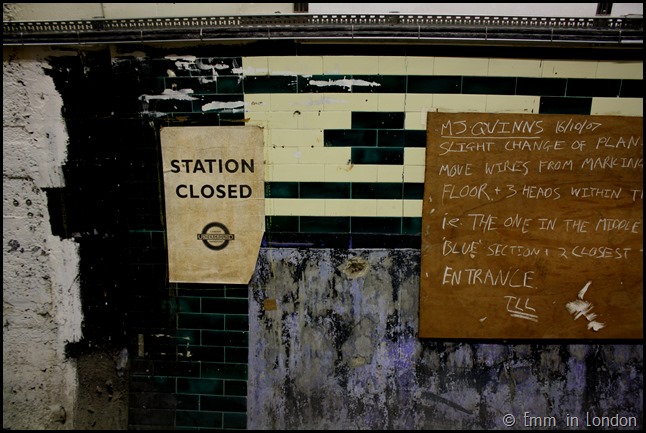 We first visited the eastern platform at Aldwych. The eastern platform was the first to be decommissioned in 1917. The “Station Closed” sign above is not a genuine sign – it is a prop from the 2004 film Creep which featured a woman who misses the last train and is then pursued along the underground by a cannibal.  As we learned on the Charing Cross Station Tour, the disused platforms of Charing Cross and Aldwych are often used for filming, and Aldwych especially so for older settings. 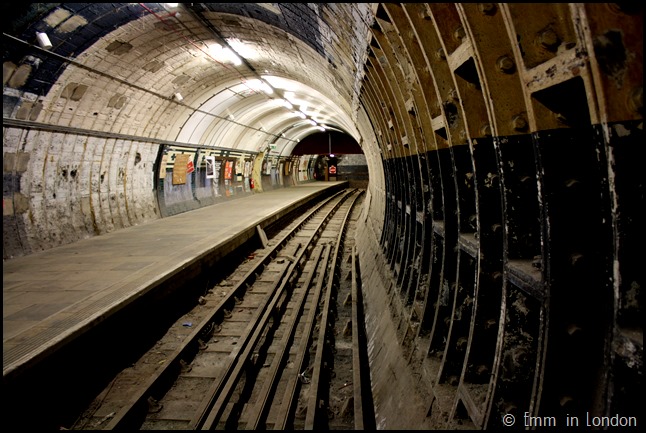 In the photo above, you can see the original tracks complete with porcelain insulators on the middle rail and lack of anti-suicide pit. The addition of anti-suicide pits on the line was one of the more grim revelations of the day! 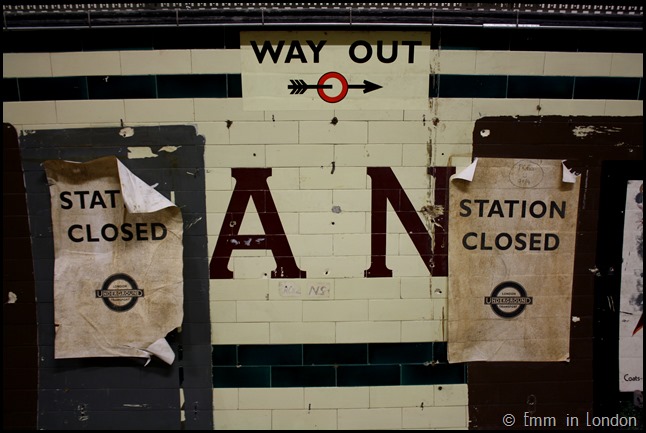 Still on the Eastern platform, above is a small sample of the original Leslie Green lettering, the A and N from Strand. The platform has been used so often in the past, both for film sets and mock ups and this is sadly the only trace of the original tiling. 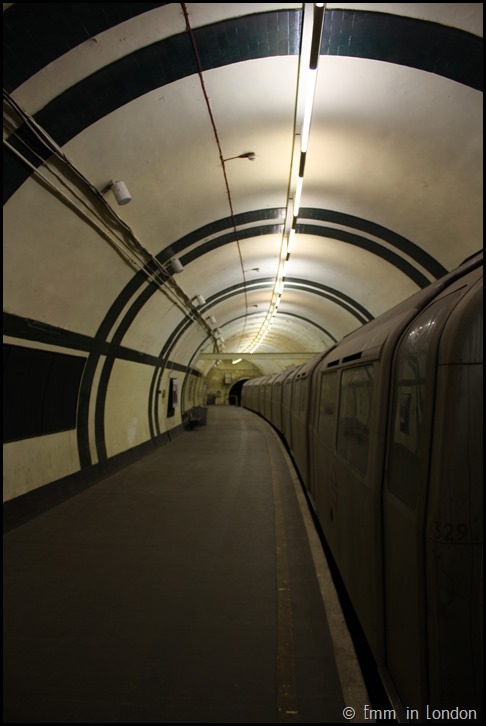 Our next stop was the western platform which was in service from 1907 right through to 1994, except for short periods during the world wards. 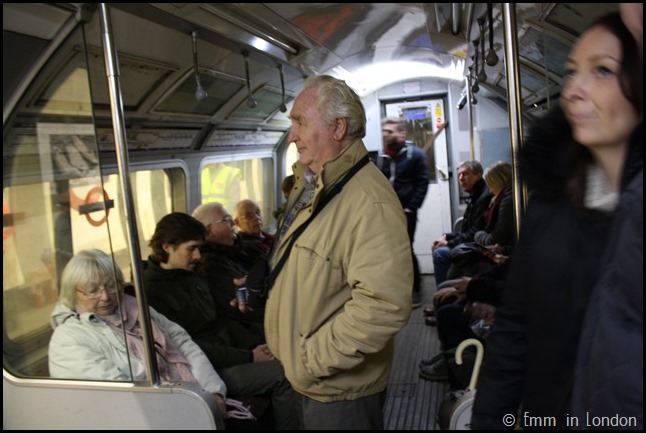 We all boarded a Piccadilly line 1972 Mark I train and listened to a brief recording of Julian Andrews on life in the underground during the Blitz. It was interesting to see everybody assume the standard underground poses, complete with lack of eye contact, as soon as they boarded the train. 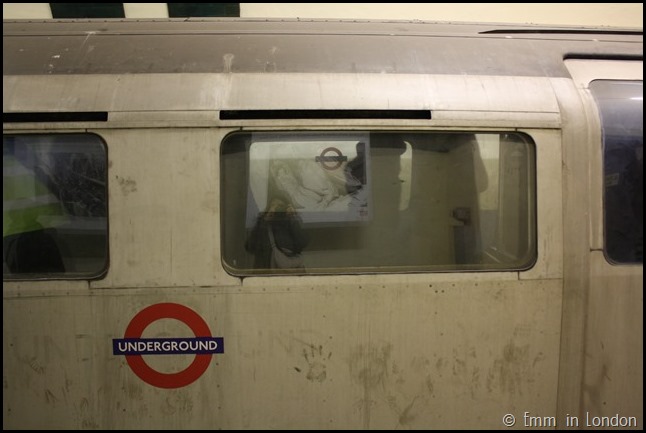 I even got to see some ghosts on the train. You can see me in the reflection but who is that on board the train? (Oh, okay, it might be fellow tour attendees). 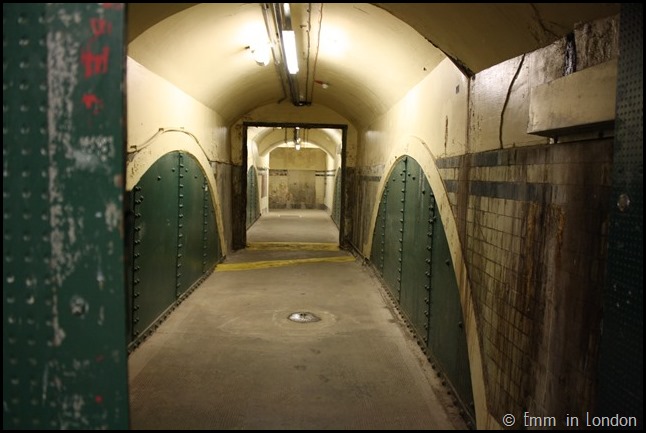 All too soon, the tour was over. We began to make our way back towards the mammoth staircase and I took every opportunity to peek down abandoned passageways and rooms. 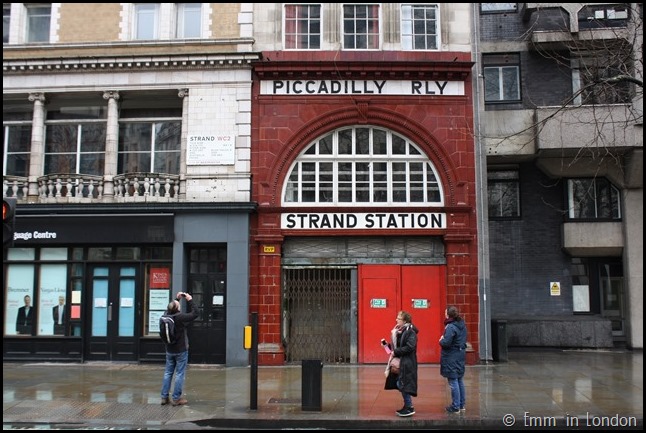 I know that next time I walk past the entrance to Strand Station, I’ll certainly slow down and recall the treasures that lie beyond those doors.

I would higly recommend the London Transport Museum Hidden London Aldwych Station Tour. Our guides were superb, a true source of endless information and they were lovely as well.

As they grow in popularity, the Hidden London tours are selling out constantly. They are going to announce new tours in March but they recommend that you become a friend of the London Transport Museum in order to secure tickets – after all, tickets to Down Street went entirely to Friends (which is crazy because the tickets were £75 each but apparently worth every penny).

The Aldwych Station Tour costs £30 plus booking fee and can be booked on the Hidden London website. There is also a dedicated site for becoming a London Transport Museum Friend.

I can’t wait for the next station tours to be announced. Where would you like to explore?