A Medieval Weekend at Lullingstone Castle 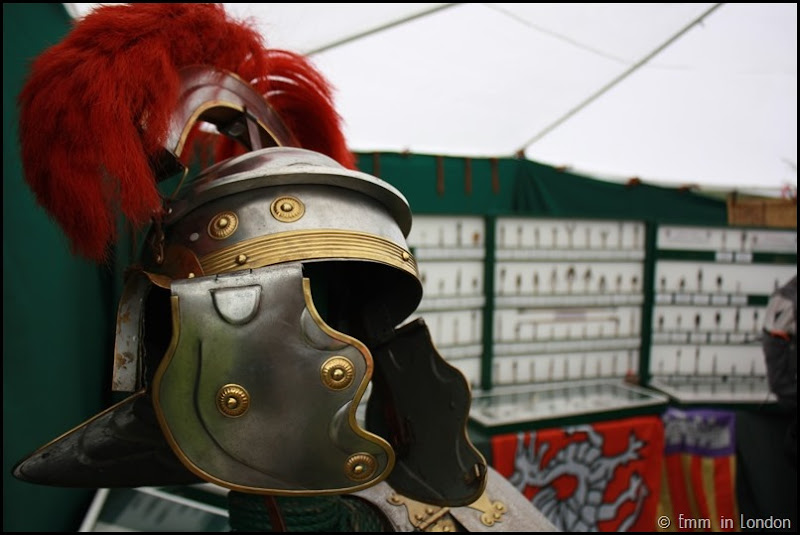 I love Lullingstone and Eynsford. It was one of the very first areas of Kent that I ever explored and I’ve been back many times since. The minute I discovered that they were holding a Medieval Weekend at Lullingstone Castle over the May bank holiday, I firmly marked it out in my calendar. The last time I visited Lullingstone Castle, it was the dead of winter and we’d walked there from the High Street only to find the gates firmly shut. Needless to say, I was quite eager to get inside those gates! 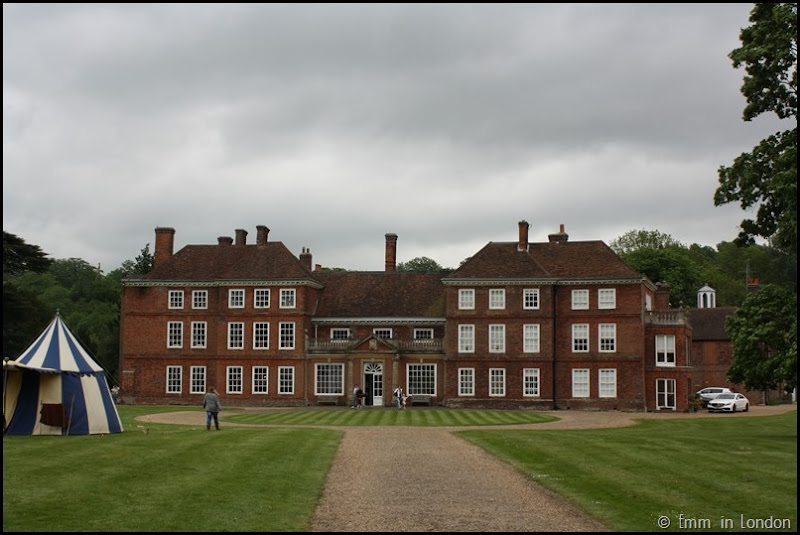 Like many English castles, Lullingstone Castle is not actually a castle; it is a historic mansion that was built in 1497. Quite incredibly, it is still owned by the same family, the Hart Dykes, and King Henry VIII and Queen Anne were known to be regular visitors. The grounds are also home to the World Garden of Plants which contains plants from around the world – definitely click the link to read about how Tom Hart Dyke came up with the idea for the garden when he was kidnapped by Colombian rebels! On this occasion though, we were not there to visit the gardens but will certainly return soon. 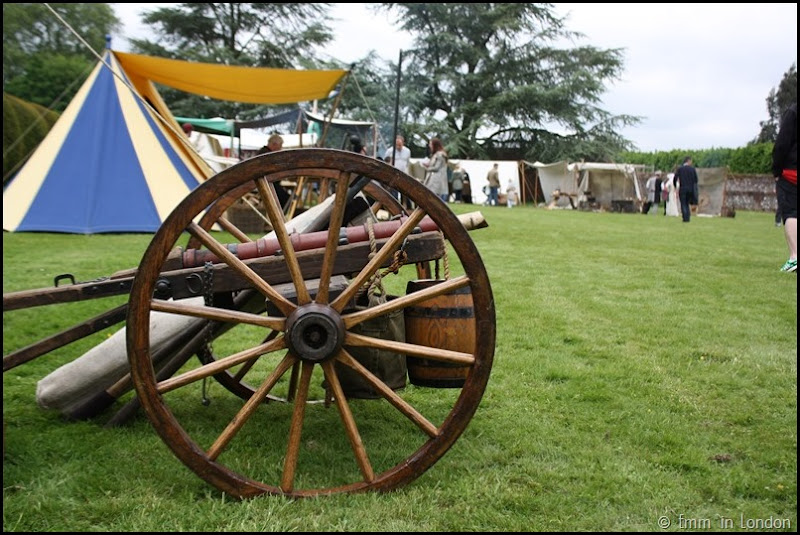 The Lullingstone Castle medieval weekend is an annual living history event that allows visitors to step into the world of medieval England. It is clearly an educational event meant for children which meant that I was in my element. 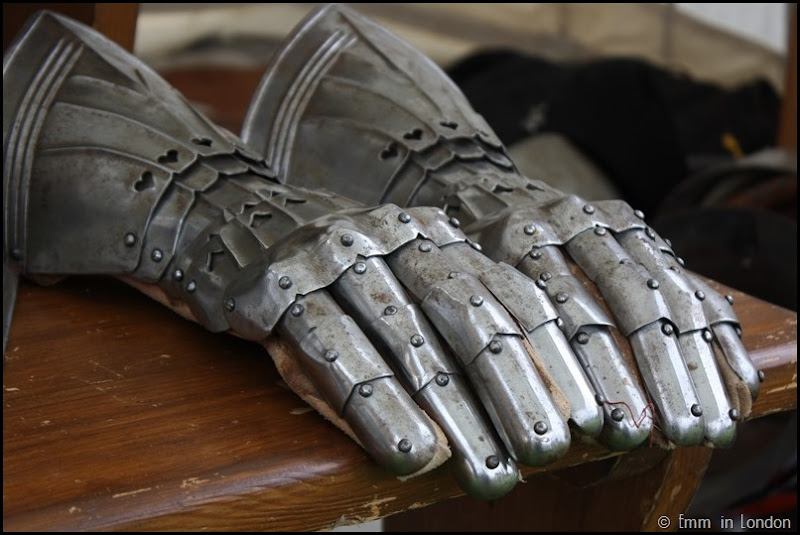 There were many examples of suits of armour, including the gauntlets featured above. If you’ve ever explored European castles, then you’ll be familiar with suits of armour but what was nice about the fair was that it had a definite focus on the normal, everyday life of peasants. 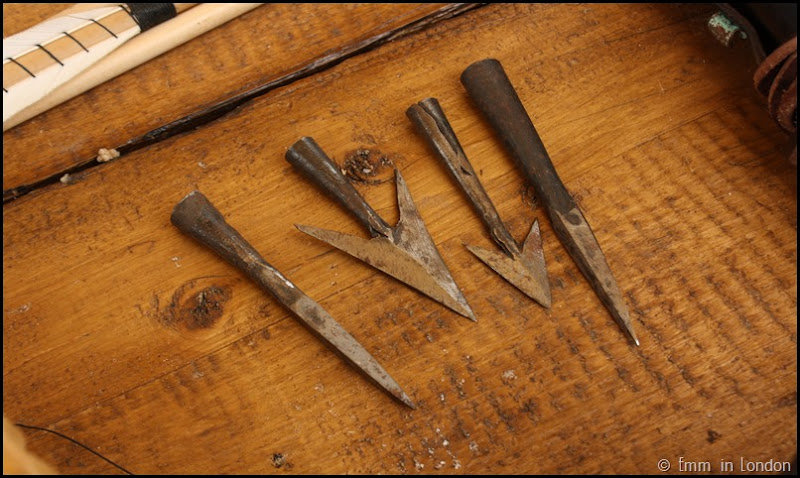 I had a nice, long chat with a fletcher called Jim who you’ll meet below. A fletcher is a person who attaches the fletching to arrows and he was very sad to admit that his surname is not Fletcher but he has been a seven time longbow champion so at least there is that. Jim explained that there were four main types of arrowheads used but in the very top photo of this post, you can see that there are scores of different types of arrowheads. 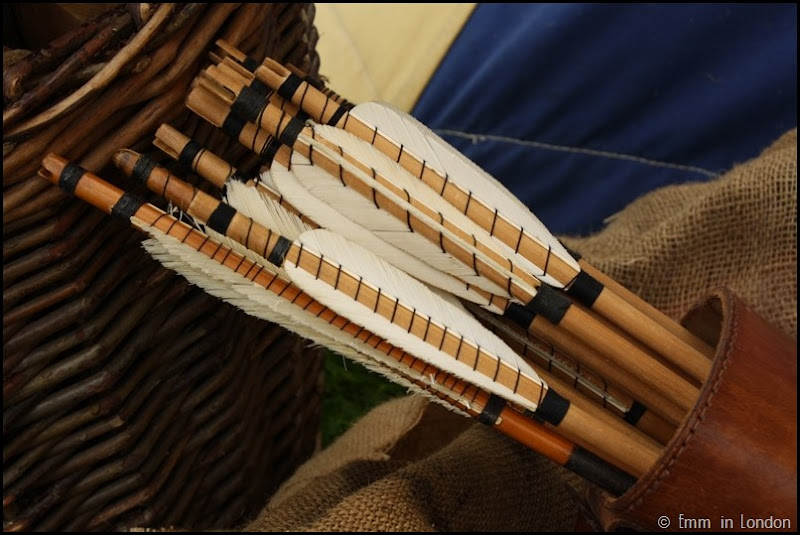 In case you were wondering what ‘fletching’ is, it is the aerodynamic stabilisation in arrows, usually feathers. Jim handmade these arrows which I found really impressive. 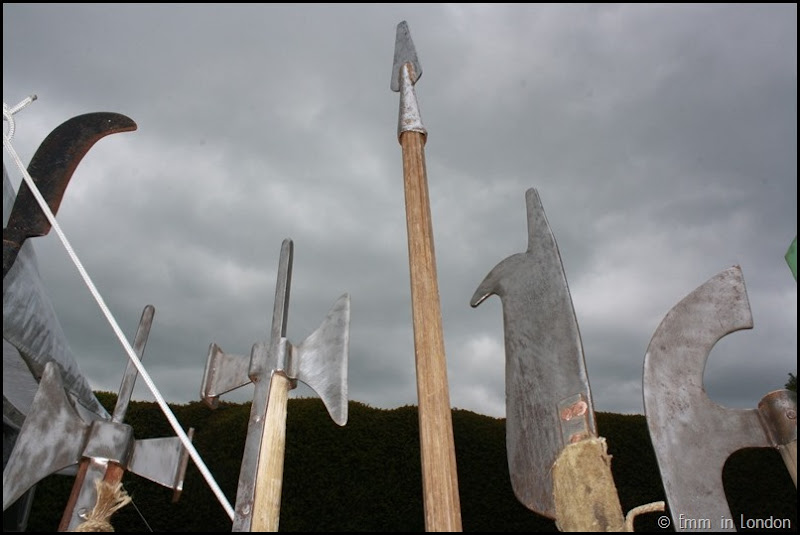 Moving on, we got to inspect these rather evil looking axes and wandered around the stalls chatting to more storeowners. I really rather wish I’d spent more time doing so because they were each fascinating in their own right. 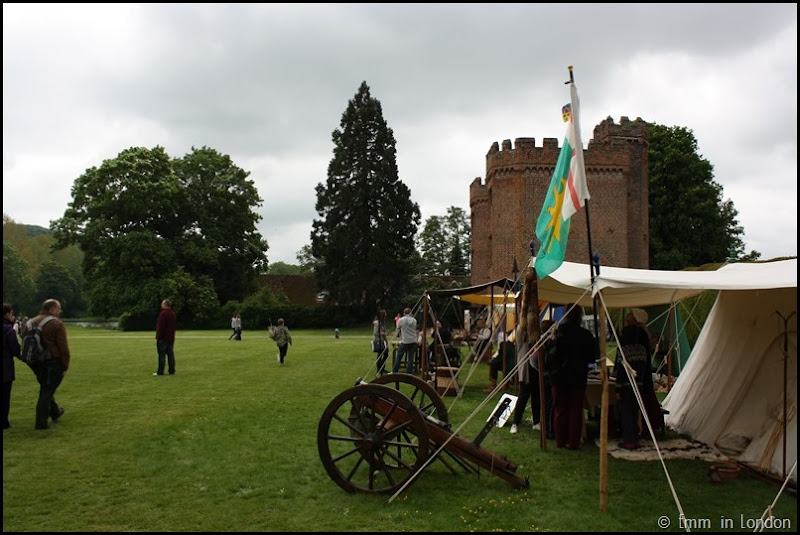 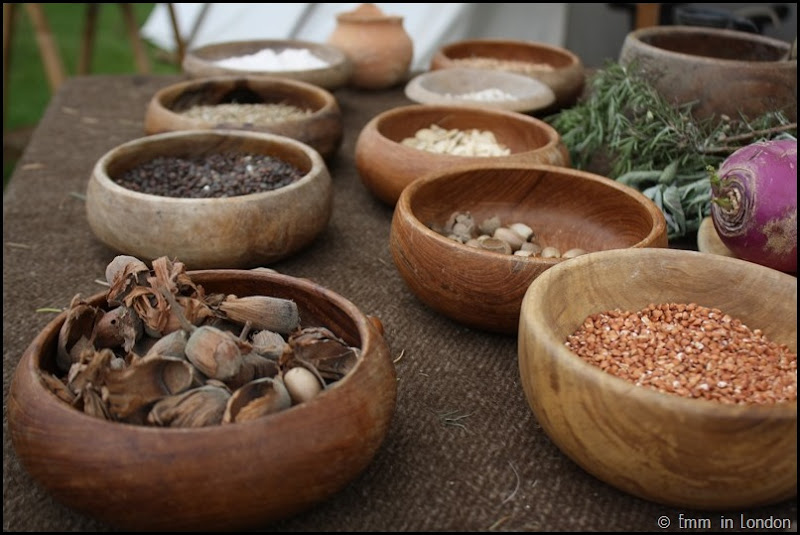 There were a number of stalls focusing closely on food consumed during the medieval period, especially by peasants. We noticed the distinct absence of meat, of course and the presence of some rather unusual types of grains and nuts.  In the foreground of the photo above, you can see Kentish cobnuts which are apparently quite delicious and behind that to the right, acorns, which really aren’t. 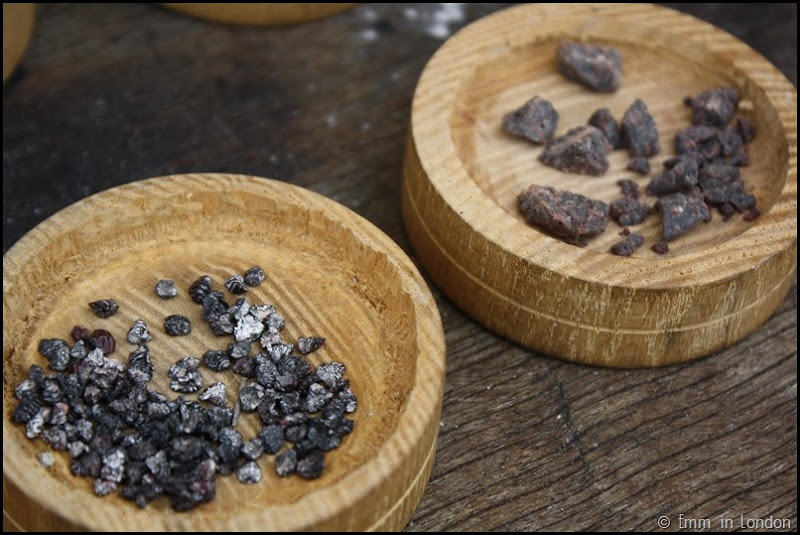 We also spent a long time talking to a lovely young man at his stall of exotic medieval spices which peasants would certainly not have been able to afford. He had frankincense and pine resin and several types of peppers. Above you can see actual cochineal beetles to the left, and dragon’s blood to the right, both rich red dyes. Why did I take a photo of these and not the frankincense? Well, I was fascinated - I am allergic to cochineal, which is used as pink food colouring in ice creams and milkshakes – but had never actually seen them up close. 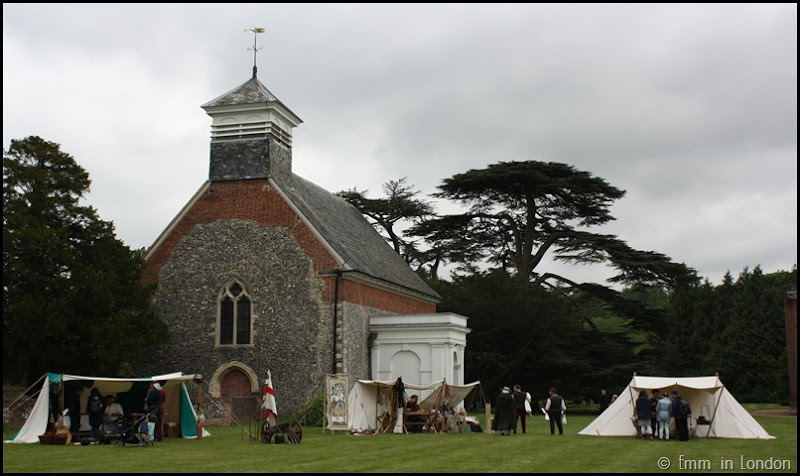 We noticed that people were rapidly disappearing behind the church and after a quick peek inside, I followed them to the reenactment area. The church is properly known as St Botolph's Parish Church and it is of Norman origin. 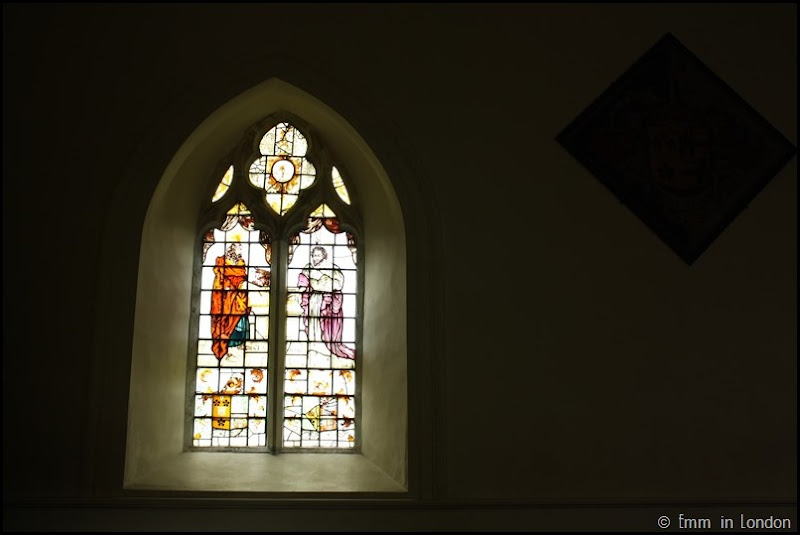 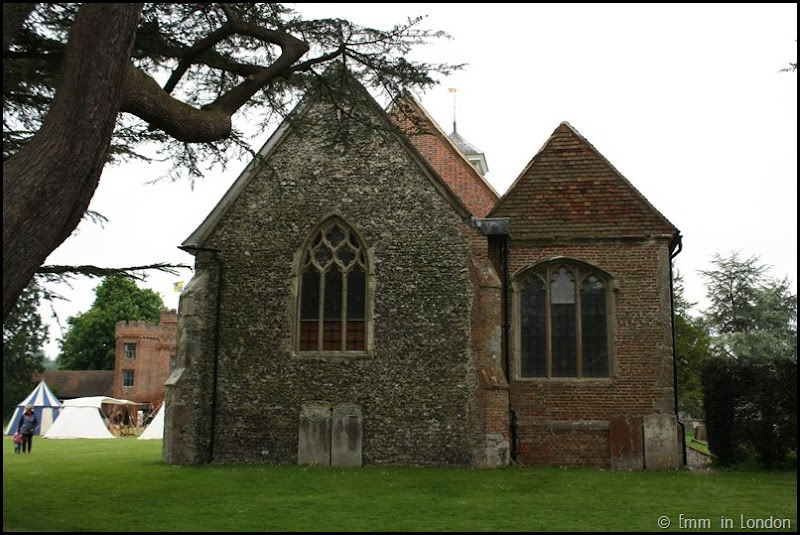 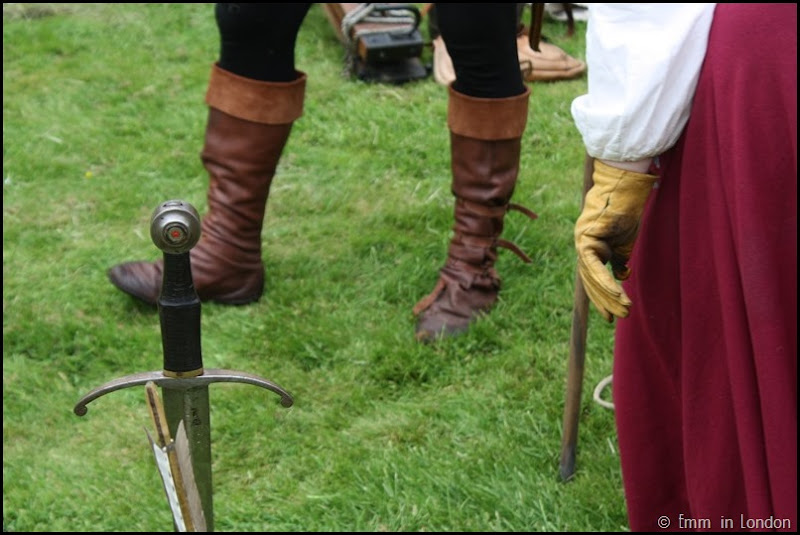 The archery and gunnery displays were presented by the Woodvilles medieval re-enactment group. I loved how they were all firmly in character and the small details in their costumes. 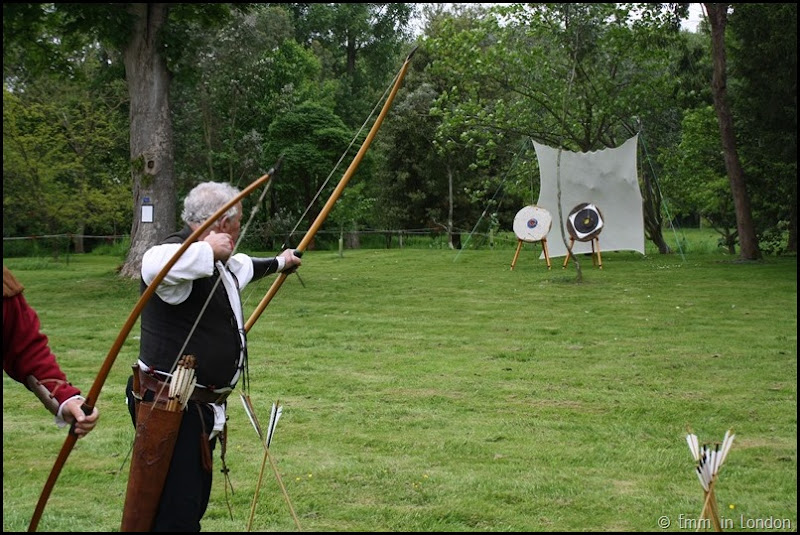 This is Jim, the fletcher that I had met earlier, firing his longbow. Doesn’t he look impressive? 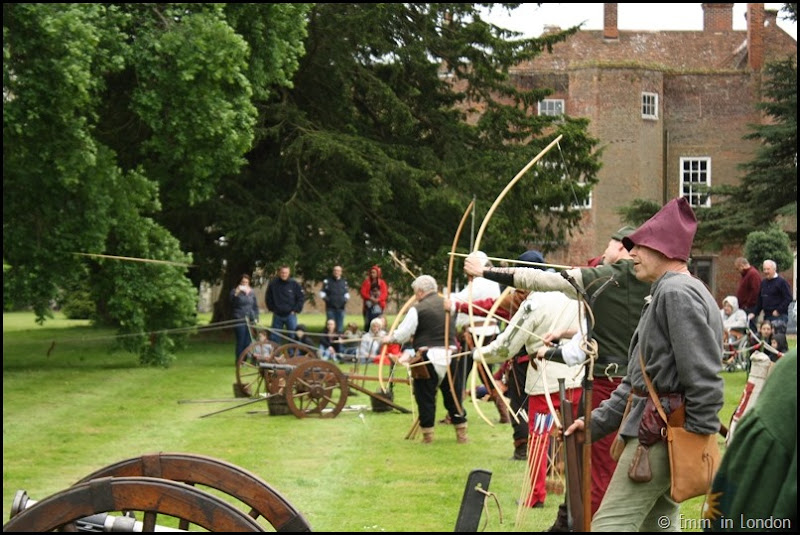 We spent some time watching the archery and gunnery display. Those guns were really loud! I overheard a really interesting conversation regarding the licensing for these guns and how they are allowed for reasons of historic preservation. 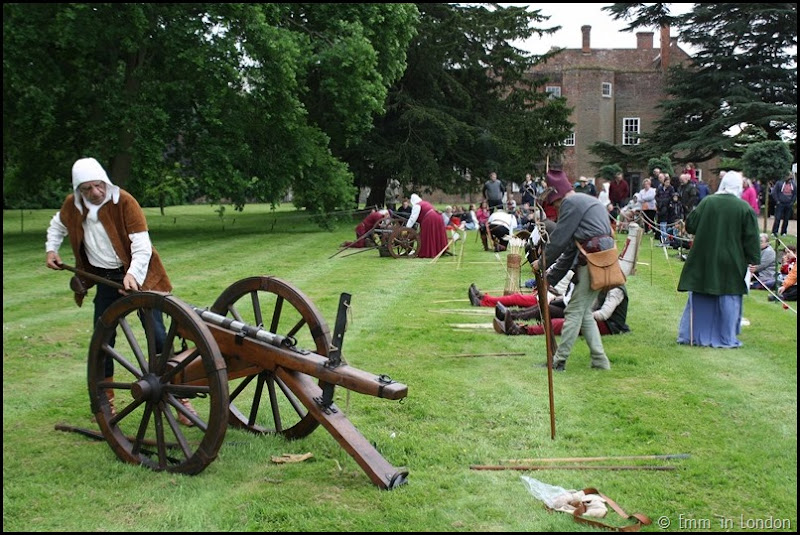 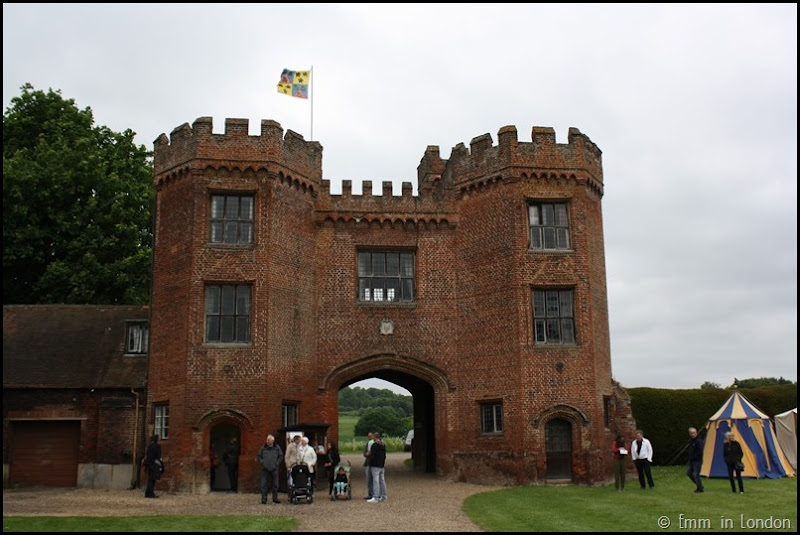