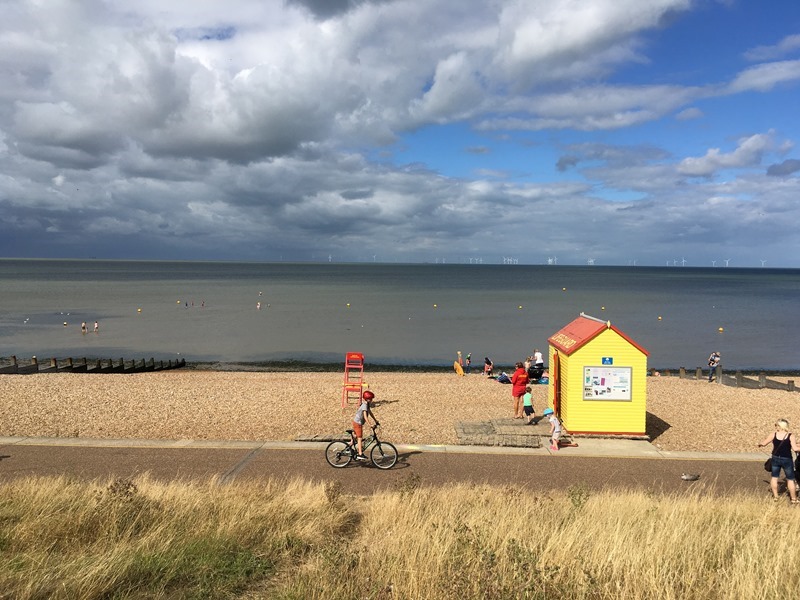 It is strange the things we dream about, things that are so easy to do but we simply never seem to get around to doing them. For the longest time, I dreamt about walking my dogs on the beach and this past Bank Holiday weekend I finally got to do that.

We began our walk on Tankerton Slopes. Tankerton is a suburb of Whitstable and an easy 30 minute walk along the beach to Whitstable Harbour.The slopes are so named because of the large expanse of grassy land sloping down to the beach. 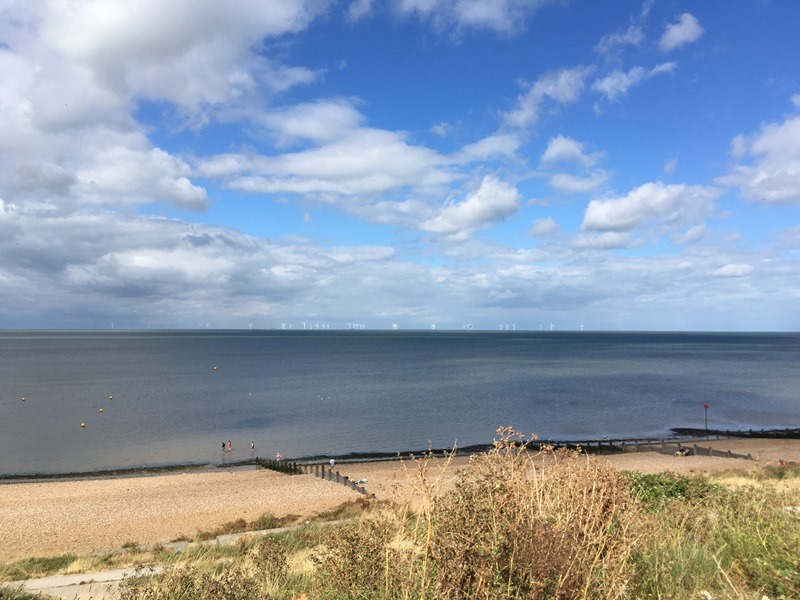 We took a moment to admire the wind farms in the distance. I love wind farms and wish that we could make a plan to make them more economically viable. They looked so much bigger in real life, more so than they appear in this photo. I should mention that all the photos in this post (and all my Whitstable posts) are taken on my iPhone 5SE. Surely I’m not the only blogger who goes on a trip to a new location and forgets her camera at home? 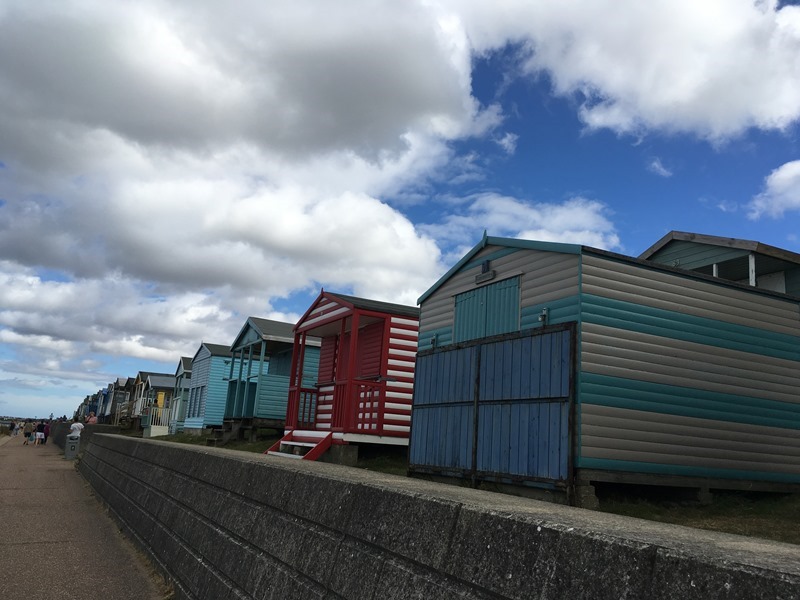 Our walk took us past beach huts which have the most fascinating story. Tankerton itself was a beachfront created specifically to cater for the Victorians that were able to visit the seaside via brand new rail routes from London. Later on in the walk, we met a lady who told us all about them. 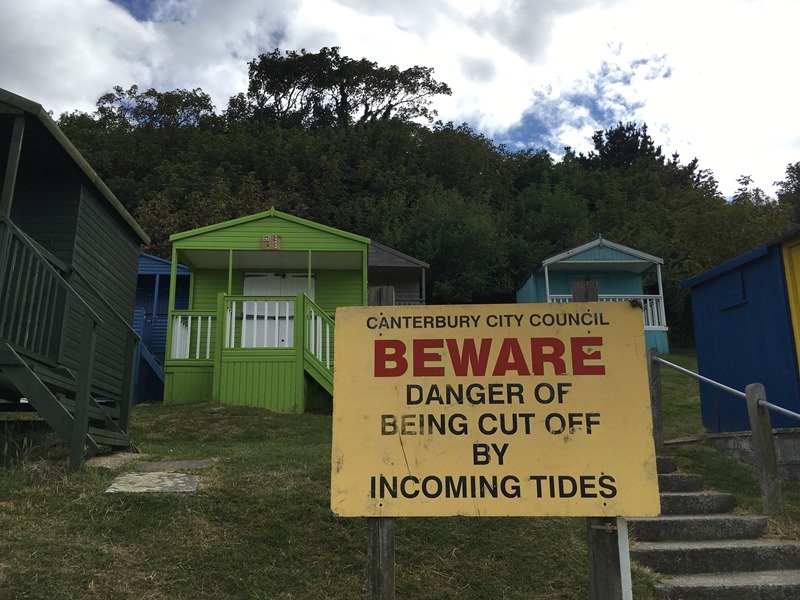 This sign made me laugh at first until we walked along the Marine Parade later that night and saw how high the tide was! 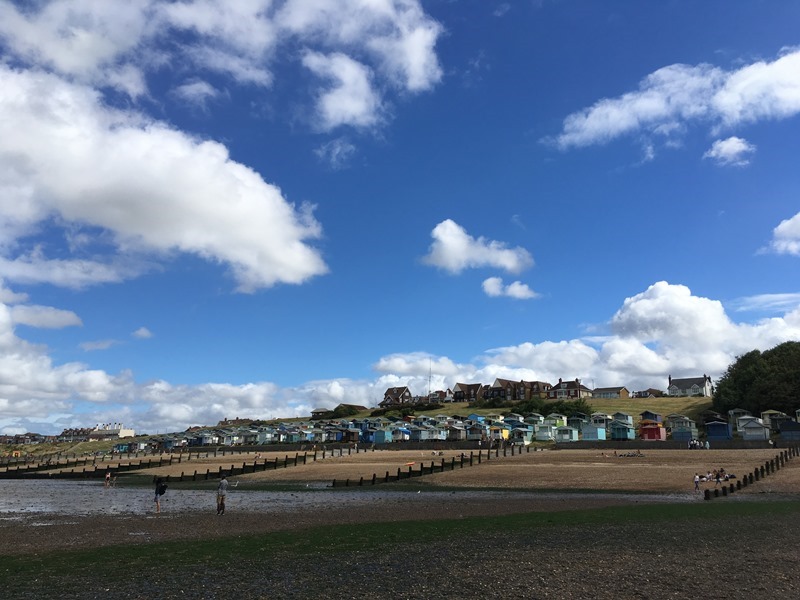 We saw a natural sandbank up ahead and decided to walk down it right to the edge of the sea. Molly wasn’t too sure about the feel of the pebble beach under her paws at first but she soon got the hang of it. 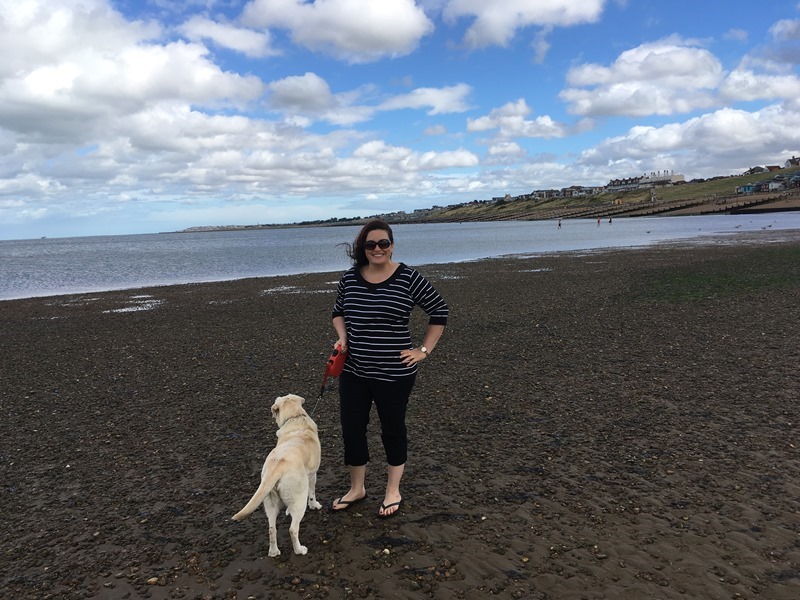 She even agreed to pose for a photo with me although she insisted on showing her more favourable rear profile. In her defence, there were some very entertaining seagulls frolicking away at the water’s edge. 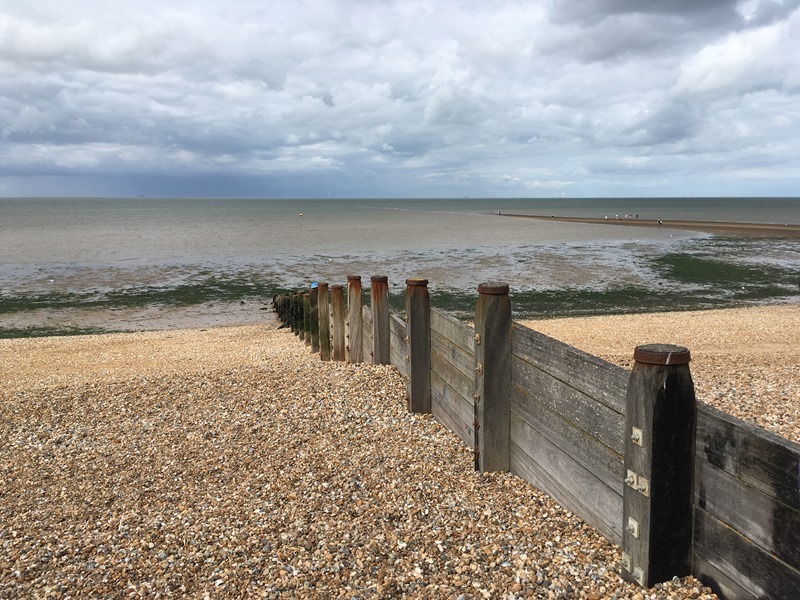 We continued our walk towards Whitstable Harbour, stopping only to admire these groynes. Groynes are there to manage coastal erosion which is of great importance on English coastlines. They interrupt the water flow, thus lessening the impact of the waves, while simultaneously controlling the movement of sand. I thought it was quite a clever idea and endlessly photogenic too. 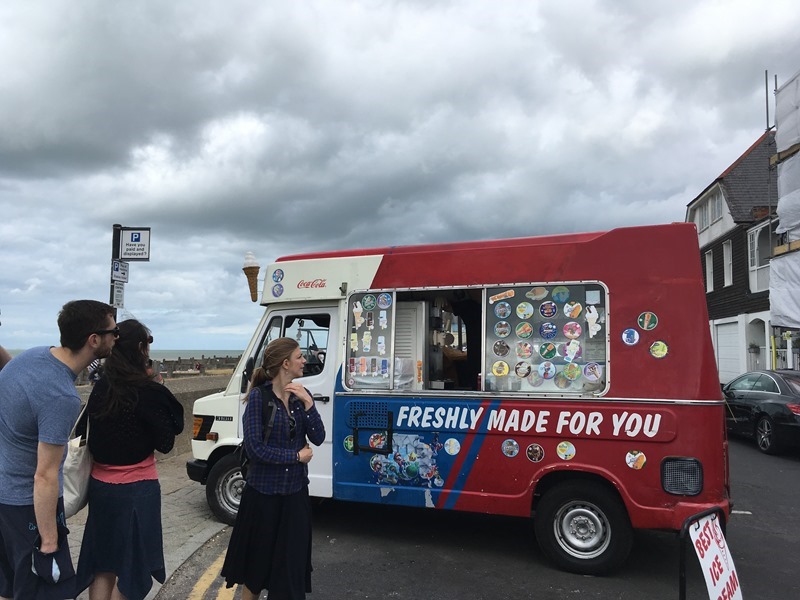 We soon arrived in Whitstable Harbour and admired the vintage ice cream van. 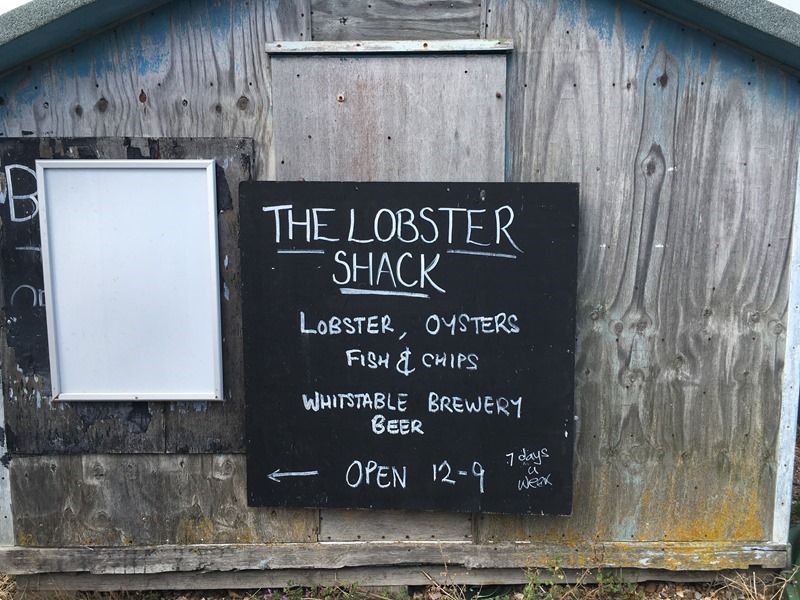 Having worked up quite an appetite, we decided to stop for a bite to eat at The Lobster Shack which I'll tell you all about in my next post. Spoiler: it was delicious but windy. 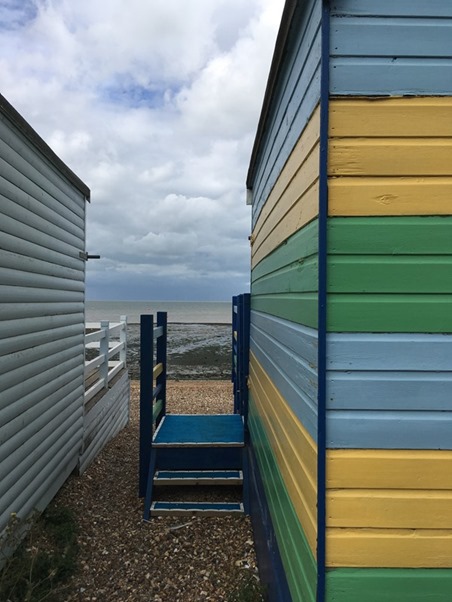 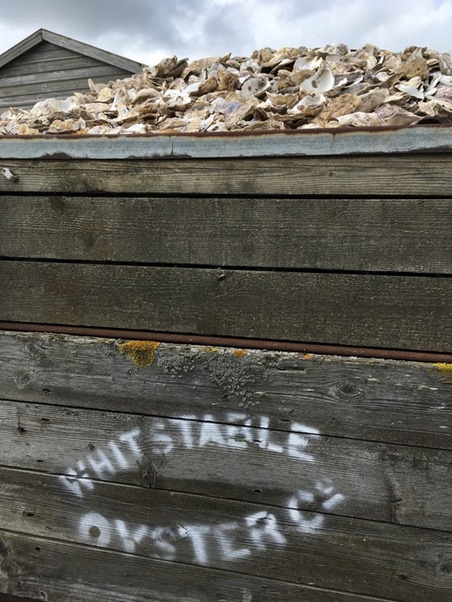 During our visit, we learned that the oyster shells are accumulated in great skips like this and returned to the sea floor to restore oyster beds and encourage baby oysters to nest in them so that they won’t be enveloped in the muddy sea floor which is lethal for them. 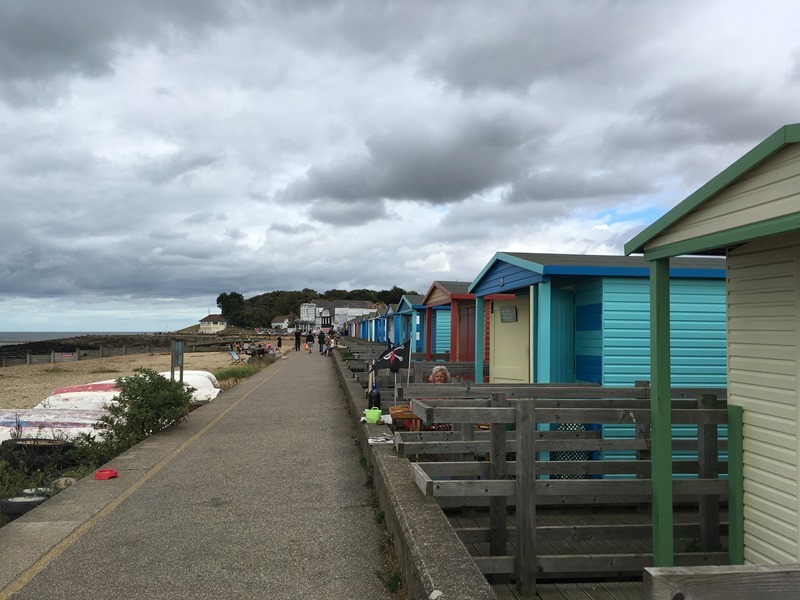 On our way, we stopped to talk to this lovely lady in front of her hut. I had apologised for taking a photo of her and explained that I was admiring her pirate flags and we soon got talking to her and her husband. I took the opportunity to ask her about the huts – coming from South Africa, I didn’t know much about them. She explained that in Victorian times, the huts were wheeled to the edge of the sea so that women could bathe and not scandalise anybody with the image of their scantily clad bodies. Our new friend mentioned a connection to the burkini ban and the fact that we are still telling women what to wear!

The couple live locally and spend their days in the hut. In fact, their grandchildren recently came down from London and spent two weeks with them at the hut. What an idyllic holiday! 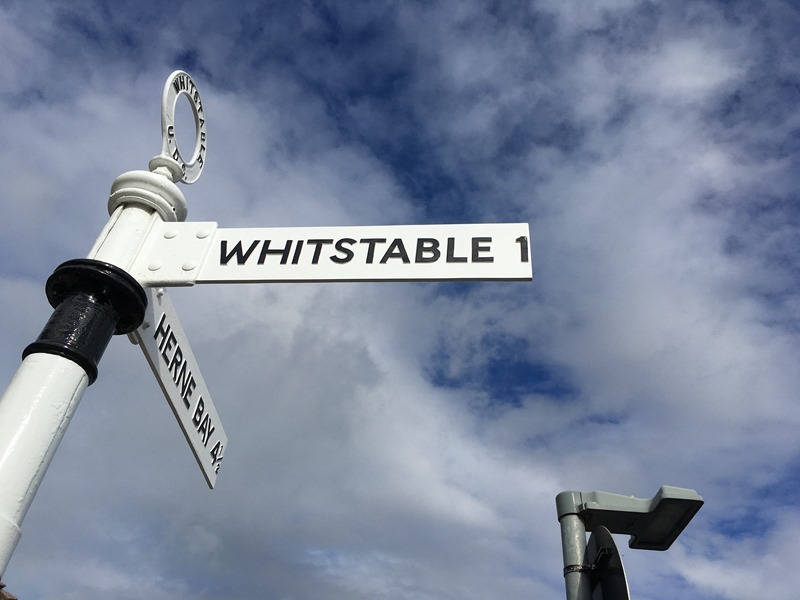 All too soon, we made it back to Tankerton and climbed the long path up the slope. I’m not sure how our 12.5-year-old dog was feeling but the humans were struggling! After buying an ice cream from the kiosk, we decided it was high time for an afternoon nap.

Have you ever spent much time at the English seaside or were oceans and big waves more your thing?