An Anniversary Meal at the East Coast Dining Room, Whitstable

There are certain lessons that Stephen and I appear to need to learn twice. Or many, many times in some instances. For example, when you are in a seaside town on a bank holiday, it pays to book ahead for your evening meal and not leave it to chance that you’ll get in anywhere. We learned that lesson in the Isle of Wight and we learned it by not being able to get in anywhere.

Likewise, if it is your anniversary, albeit only a dating anniversary, it is best to do a little research to ensure that you find the best possible place to share your special meal. We’ve been together 18 years so I’m not quite able to list how many times we’ve learned this particular lesson.

And so it was that we’d taken a long walk from Tankerton Slopes to Whitstable Harbour (and back) and we had enjoyed a delicious seaside lunch at The Lobster Shack. With tummies full and drunk on sea air, we promptly fell asleep on return to our Airbnb, only to wake up at about 8pm, ravenous and in need of a walk.

The problem is that while many establishments had extended their Sunday opening hours to accommodate visitors on the bank holiday, even then 8pm was pushing it and most kitchens had closed. 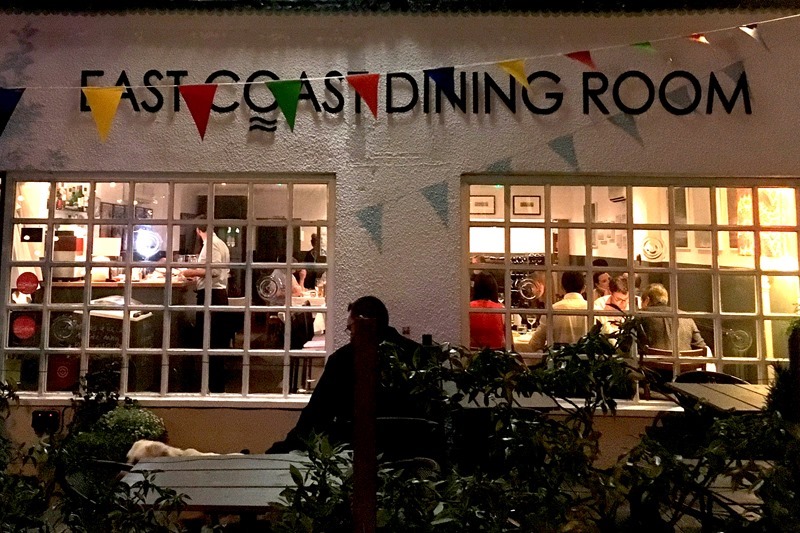 After being turned away from two places, we saw the welcoming lights of the East Coast Dining Room and even noticed that we would be able to sit outside with Molly the Labrador!

With just ten minutes to go before their kitchen was due to close, the lovely people at the East Coast Dining Room welcomed us in. They warned us that we might have a little wait before they could take our order but ensured that we had a bread platter and Elderflower and Prosecco cocktails to enjoy while we waited. It is just as well because the menu was delightful and we pored over it for some time trying to make our choices. 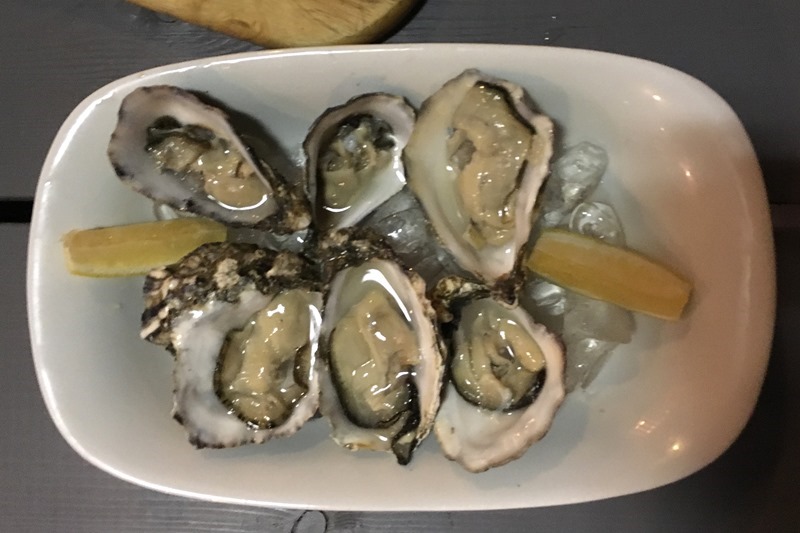 Being that Whitstable is the oyster capital of England, we decided once again to begin our meal with half a dozen oysters for £8. The oysters were served with lemon, shallot vinegar and Tabasco and simply melted in our mouths, as oysters should. It was about this time that we began to ask why we can’t eat oysters every day. 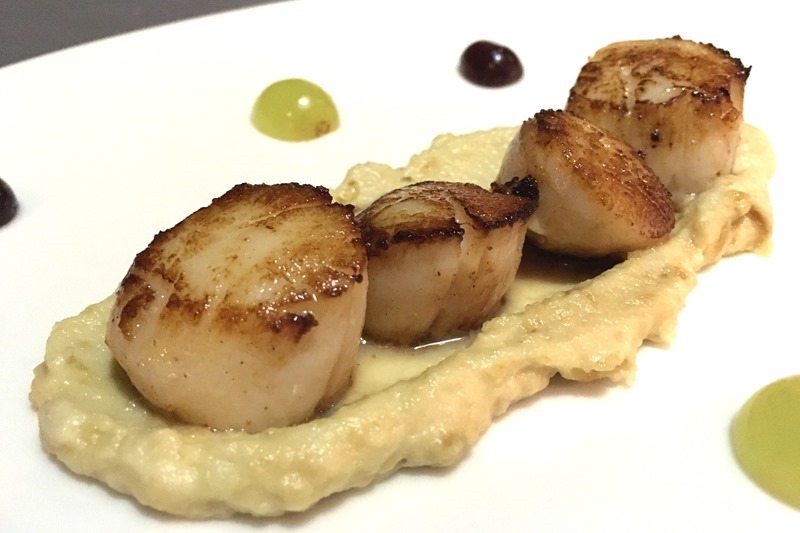 For our first course, I decided on the seared scallops for £9.50, served with cauliflower purée and pickled grapes. They were so good that I was reluctant to share them with Stephen (it's our thing, we share) and I even refused a taste of his starter because I didn’t want to mix tastes. In the end, I was a good wife and gave him an entire scallop. 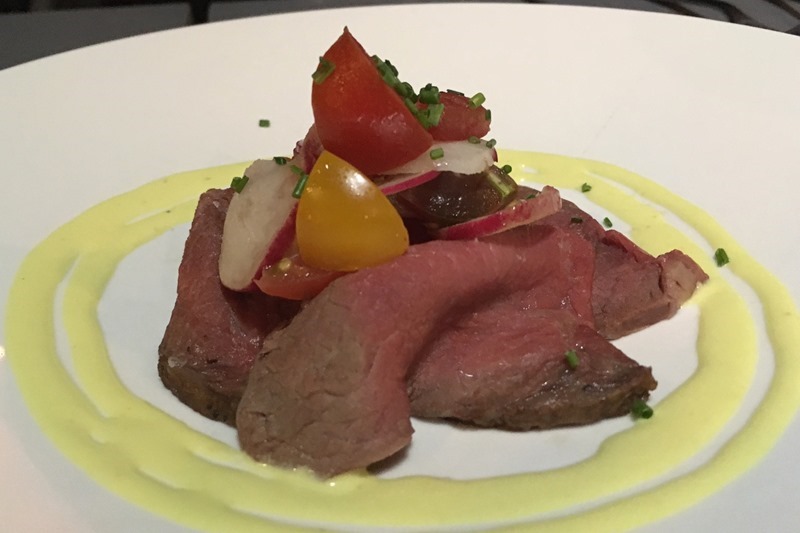 Stephen decided on the sirloin for £9, slow roasted with a radish and tomato salad and served with a mustard cream. In a word, he described it as ‘awesome’ (he’s the man of little words, remember?) 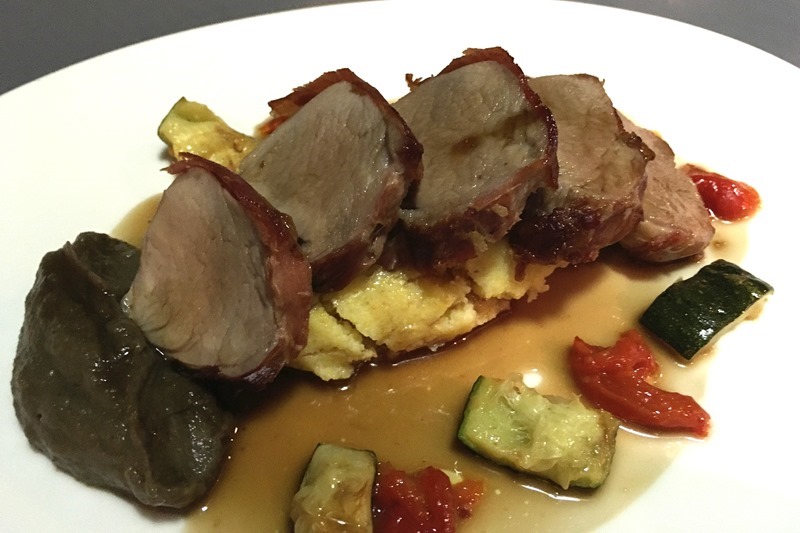 For our main course, I chose the pork tenderloin wrapped in prosciutto, served with aubergine purée, roast peppers and courgettes and resting on a Parmesan polenta for £17.50. The pork was succulent, incredibly tender and very tasty indeed. I especially liked the aubergine purée and thought that the roast peppers and courgettes were the perfect accompaniment to the meal. I was a little bit more gracious this time and allowed Stephen a decent taste which he greatly appreciated. 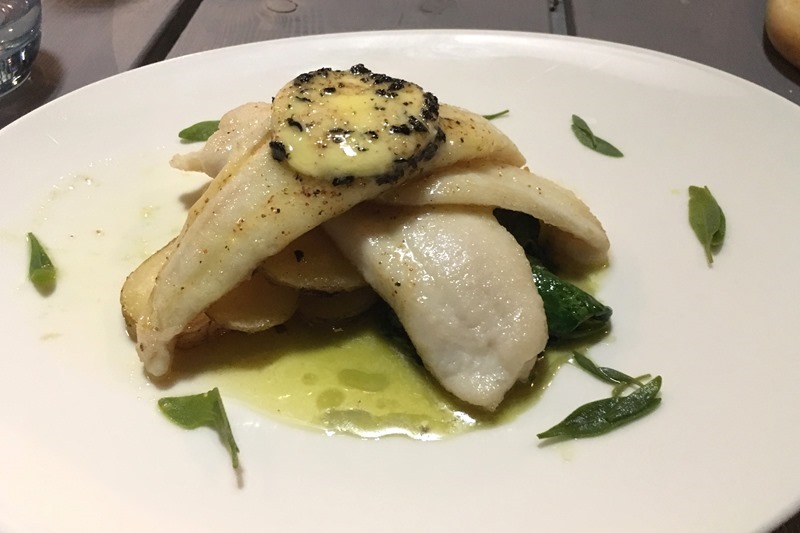 Stephen chose the lemon sole for £17.50, pan fried with scallop roe and seaweed butter and served with spinach and sautéed potatoes for his main course. I had a taste and it was absolutely delicious and like the sole I remembered and loved from South Africa. It was at this moment that I realised that I don’t like Dover sole and that it is lemon sole that I do like. The flesh is much lighter and slightly sweeter and Stephen confirmed that he greatly enjoyed his meal.

We loved our meal at the East Coast Dining Room and cannot speak highly enough of the welcoming staff. At different times in the evening, we were visited by both waiters and management who took the time to come out and chat to us and even made sure that Molly had enough water and cuddles.

We thoroughly enjoyed our meal and would absolutely recommend it to anyone seeking a romantic meal for two. There is no fixed menu at East Coast Dining Room and the food on offer changes seasonally. It is the kind of place that you will return to again and again just so that you can see what delicious items they have thought of next.