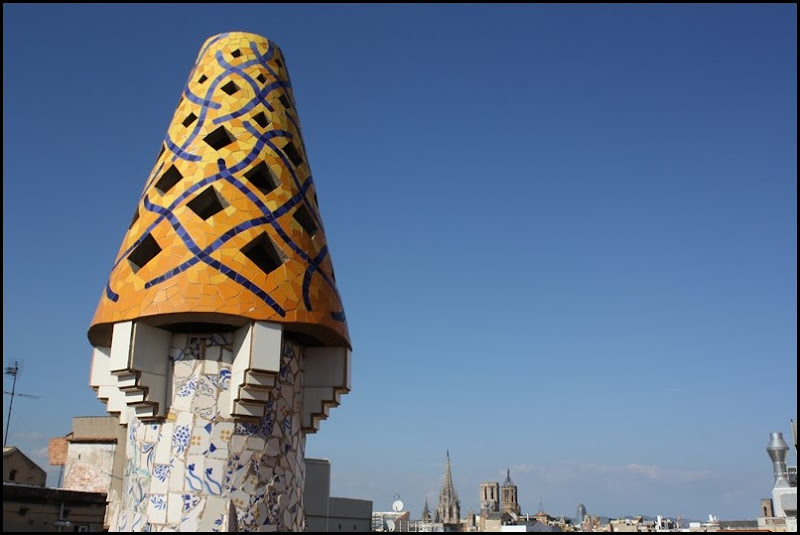 I'm just going to take five photos, I thought to myself. I don't actually have to take a hundred photos of every place I visit, making it ever more difficult to choose a couple and write about it. I suspect that many readers familiar with Palau Guëll in Barcelona are already enjoying a hearty laugh at my expense. It is safe to say that this wonderful example of Antoni Gaudí design far exceeded my expectations in every way. 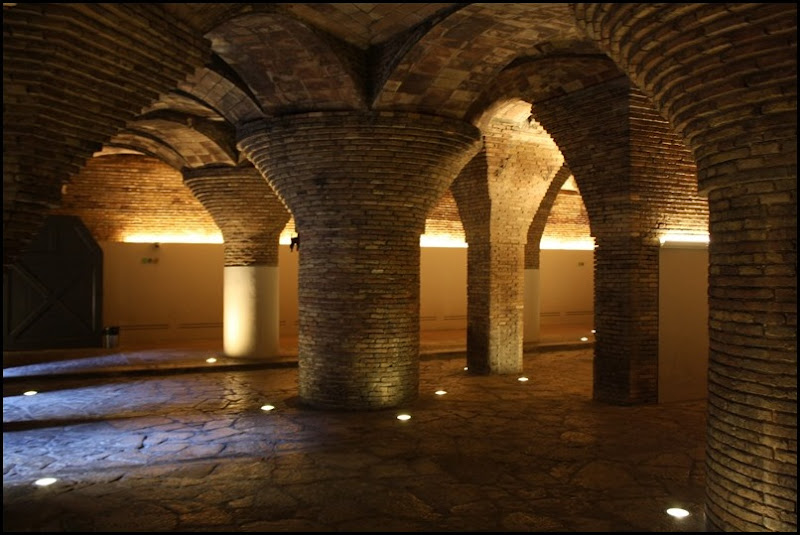 We began our tour of the palace in the basement where the horses were kept and we had a chance to see the original canine hitching posts. I loved the light in the basement which was enhanced by both the central skylight and the light streaming in from the windows at street level. 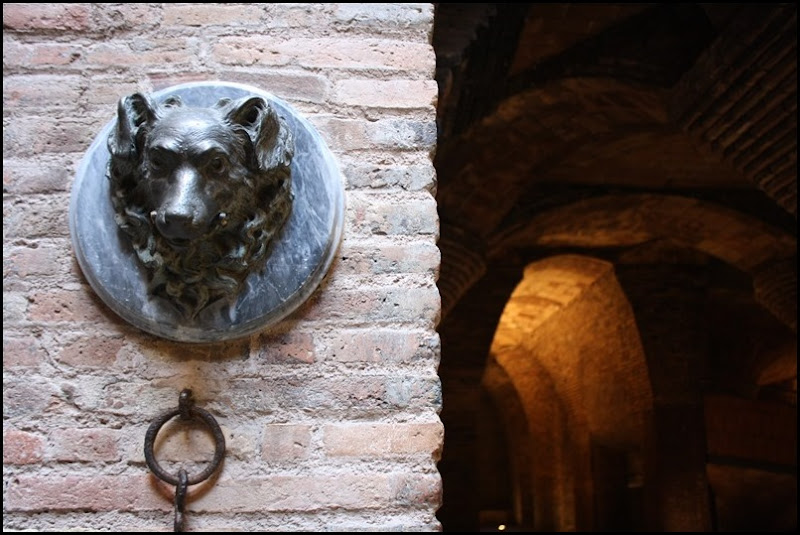 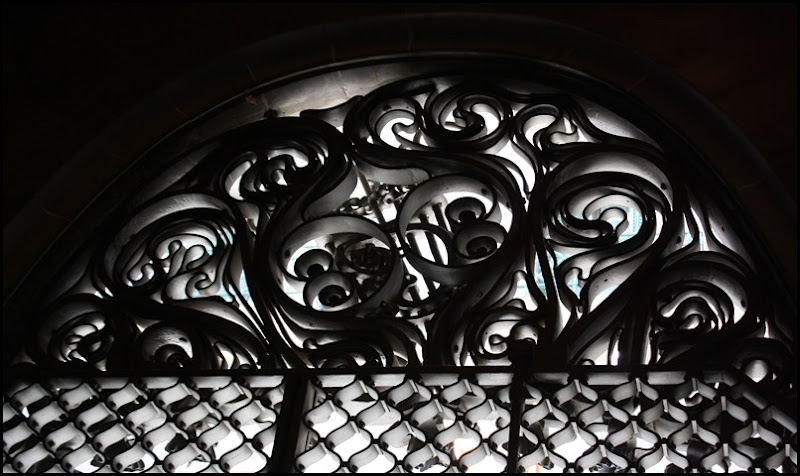 We moved to the ground floor next where we admired the parabolic arches above the main doors and ascended the central staircase to the mezzanine level. We admired the original wooden door, complete with the most beautiful peep hole. The lamp in the photo below is original as is the tropical red bullet wood ceiling. 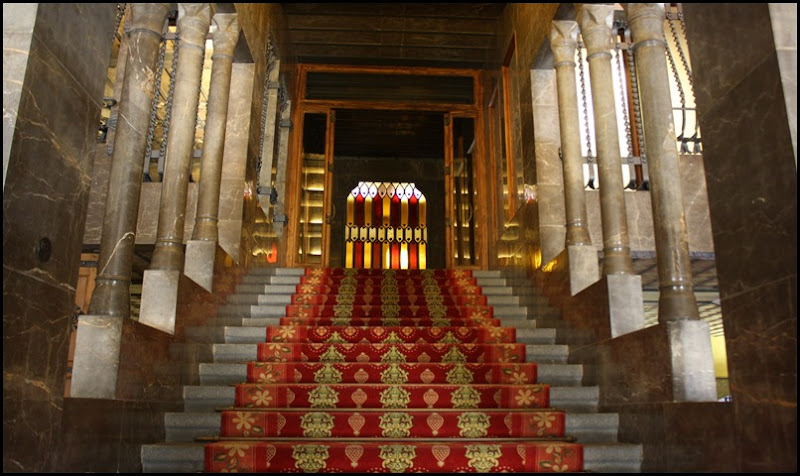 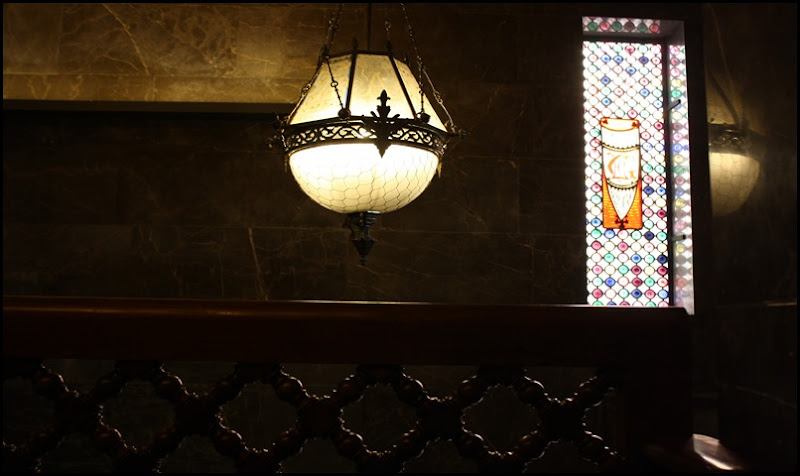 We took the stairs to the main floor and turned towards the Hall of Intimates. I was quite fascinated by the name of this space alone and this is where the Guëll daughters gave piano concerts and where the family dined with their closest friends. The walnut table and oak chairs finished with embossed leather are all original to the Guëll era. 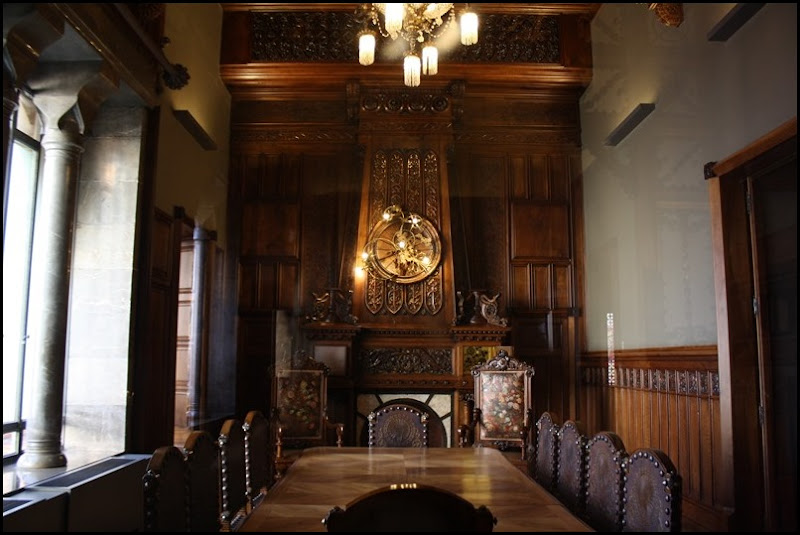 Outside of the Hall of Intimates, I saw an unremarkable corridor and could not fathom why I was being directed to look down it. It was only after I brought my camera to my eye and looked down the viewfinder that I saw it. The light flowing through the stained glass windows was simply exquisite. 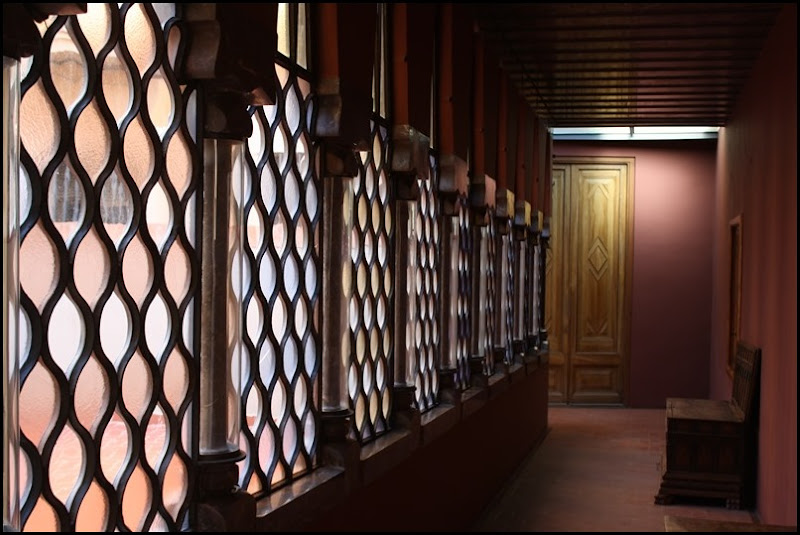 This corridor connected the palace with the family residence on nearby La Rambla where Guëll's father resided. 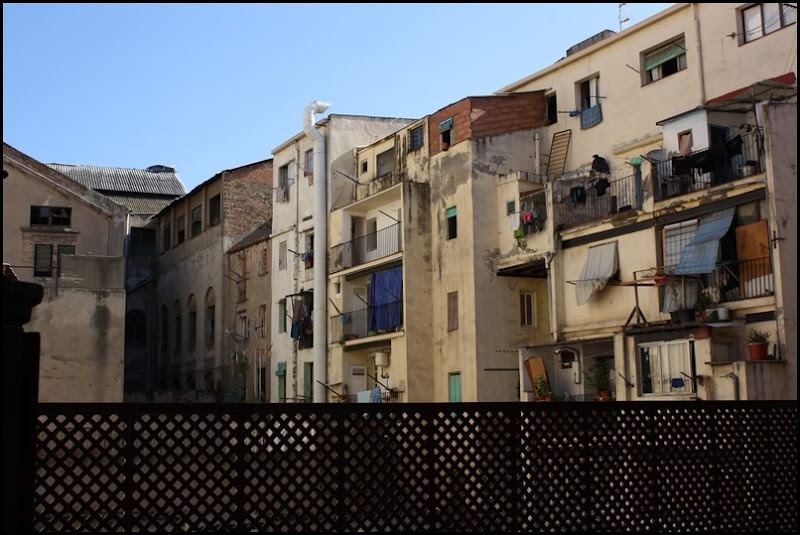 We soon emerged on to the southern terrace where I admired the rear facade of the building as well as the neighbouring residences. What a difference in style! 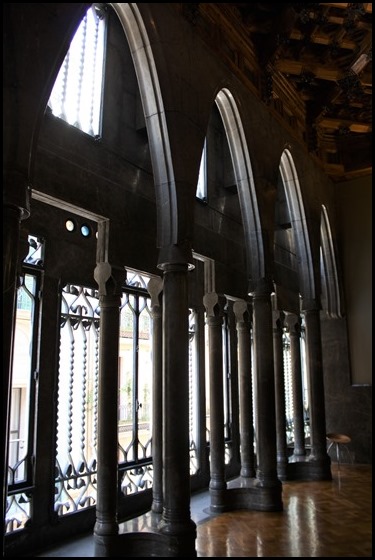 We retraced our steps and found ourselves in the Hall of Lost Steps. By now I was loving the names of all the different rooms. I am sad to admit that I have no idea why the hall has this name. I think it is because of its unique acoustic properties. What is notable about this space, apart from the fact that it leads to the Central Hall, is that Gaudí made use of the bay window area by erecting three arches and thus creating the illusion of a slightly wider space. 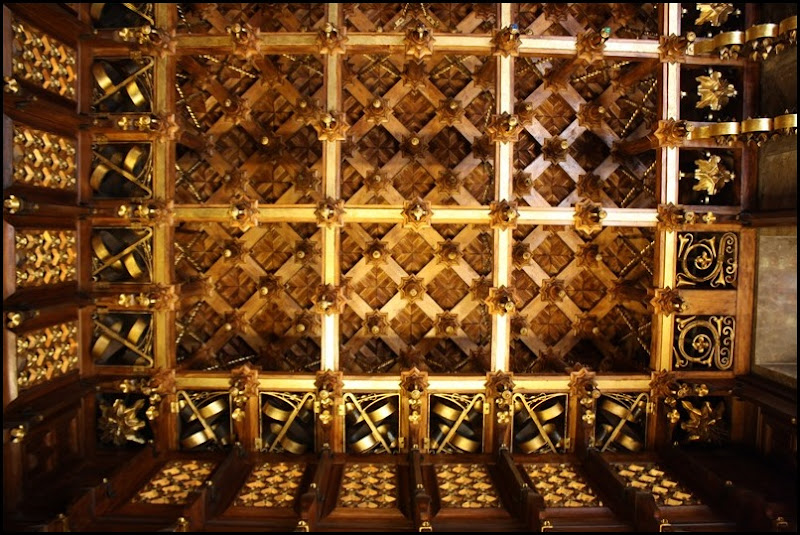 I wandered next into the Visitor's Hall which afforded a view of the dressing room where female guests could prepare for occasions. The Visitor's Hall had the most beautiful oak, wrought iron and gold leaf ceiling and stained glass windows looking on to the street. To the top left in the photo below is a lattice window that allowed the Guëlls to observe guests without being seen. How intriguing! 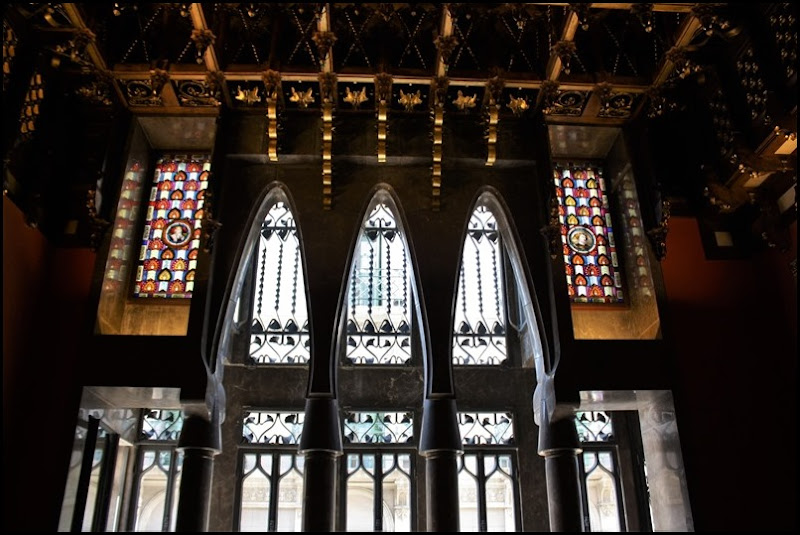 We moved back into the Hall of Lost steps and it was finally time to admire the Central Hall which was quite exquisite. Looking up we could see the parabolic dome as well as the pipes of the organ. 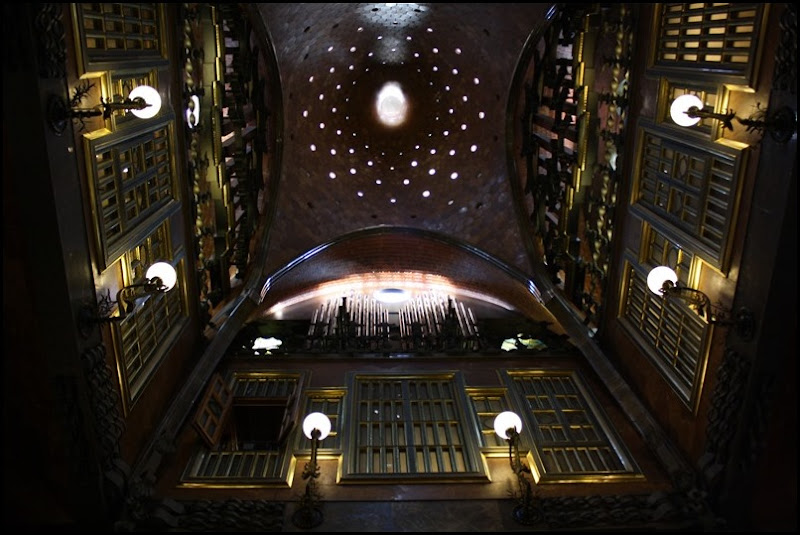 From the Musician's Gallery, we were afforded quite a view of the hall. The doors ahead are the doors to the chapel. When they were open, the halls was used for religious services and when they were closed, the hall was used for recitals, concerts and other gatherings. 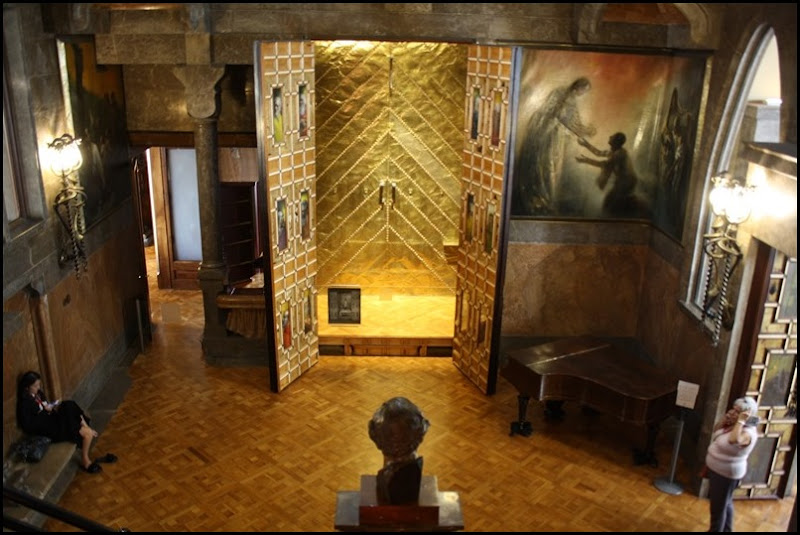 The screen separating the Musician's Gallery from the central hall was made of rosewood and ebony and designed in the Arabian style that appealed to Gaudí. 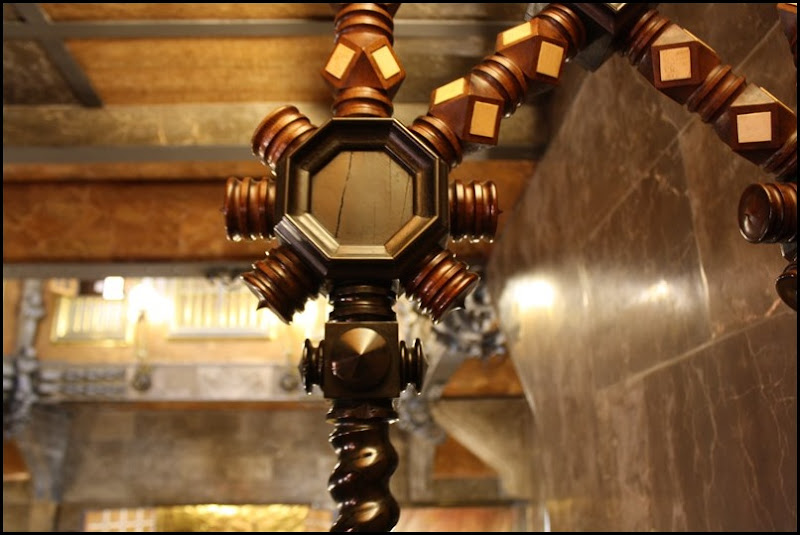 Ascending the stairs to the bedroom level, we found  ourselves in another Hall of Intimates, this time used by the family as a sitting room. I especially liked the painting of Saint Elizabeth of Hungary above the fireplace. It was done by Alexandre de Riquer and was done with gold and stone inlay in marble. 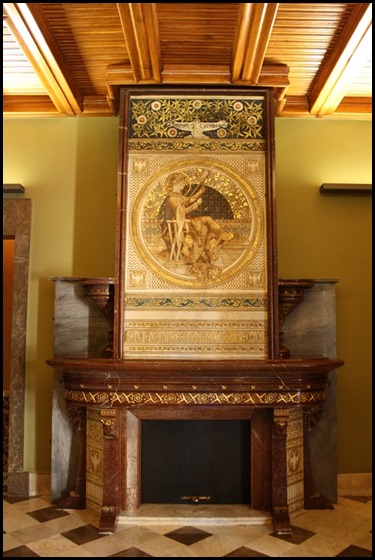 From the hall of intimates, we gained a fantastic view of the organ pipes and I admired the windows that opened on to the central hall too. 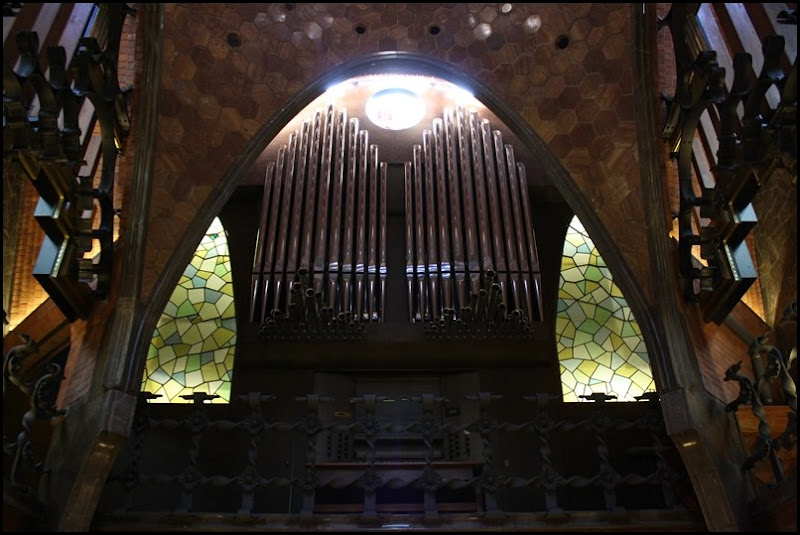 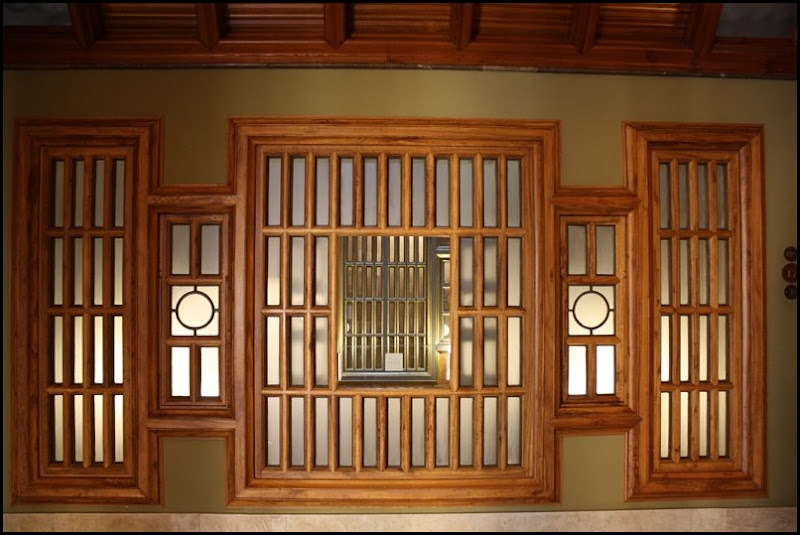 On this level, we also saw the bedrooms of Eusebi Guëll, his wife Isabel López and their six children. There was an exhibition of Guëll furniture, including this art nouveau screen and a dressing table belonging to the eldest of the Guëll daughters, Isabel. 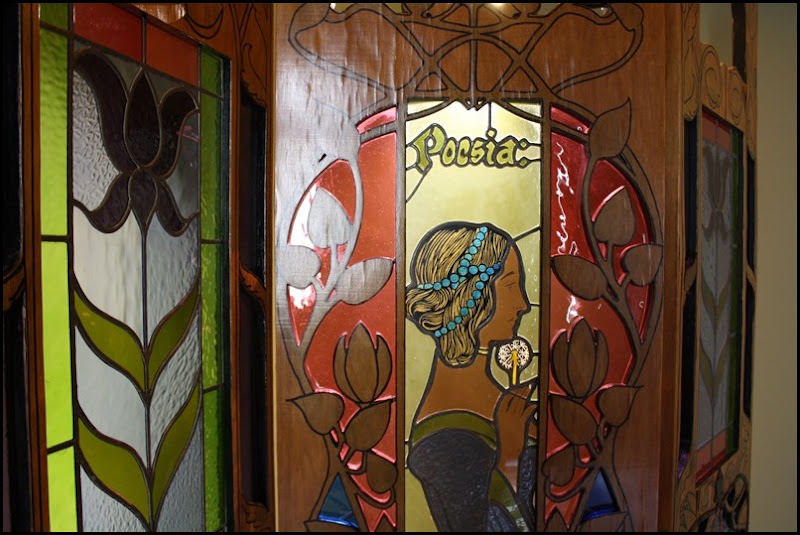 Before escaping the heat of the bedroom level, we paused only to admire these geometric bathroom tiles before rushing to the attic. 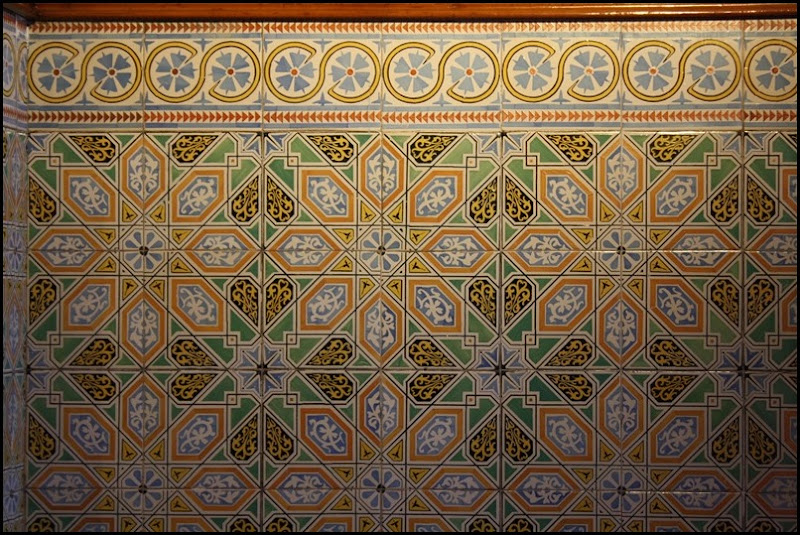 The servants used to stay on the attic level and laundry and kitchen tasks were performed there too. The attic seems lovely and airy today but it's hard to believe that eleven bedrooms were crammed up there together with a kitchen and laundry. 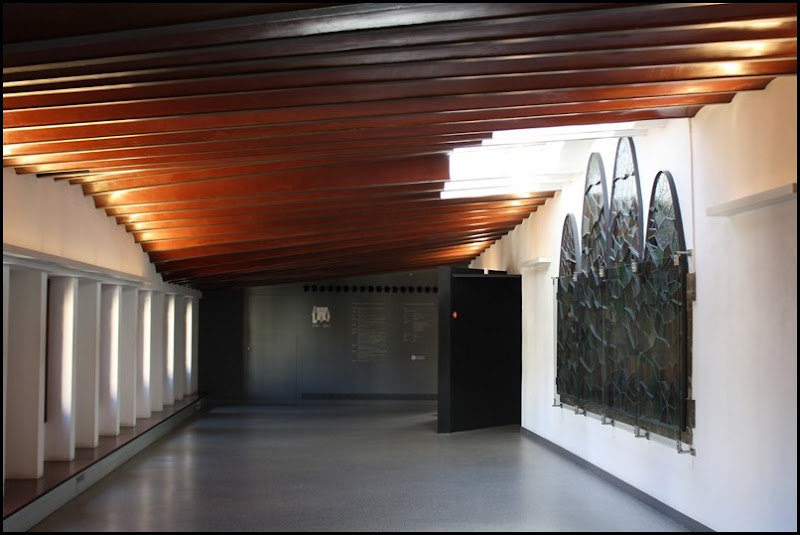 I peeked out of the window and took another opportunity to admire the houses behind. I do love seeing how people live. 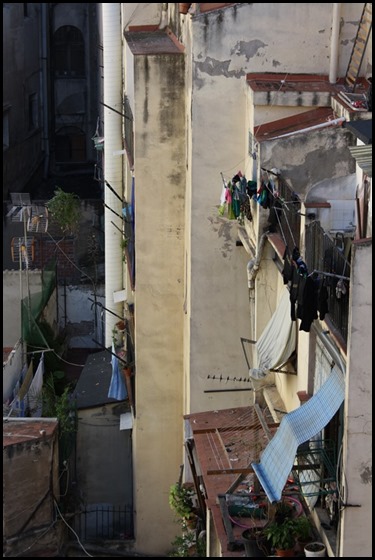 Finally it was time to climb our final set of stairs to the roof level. If I broke my five photo rule in the house then I smashed it completely on the roof which is why it deserves its own post. Here is just a taster. 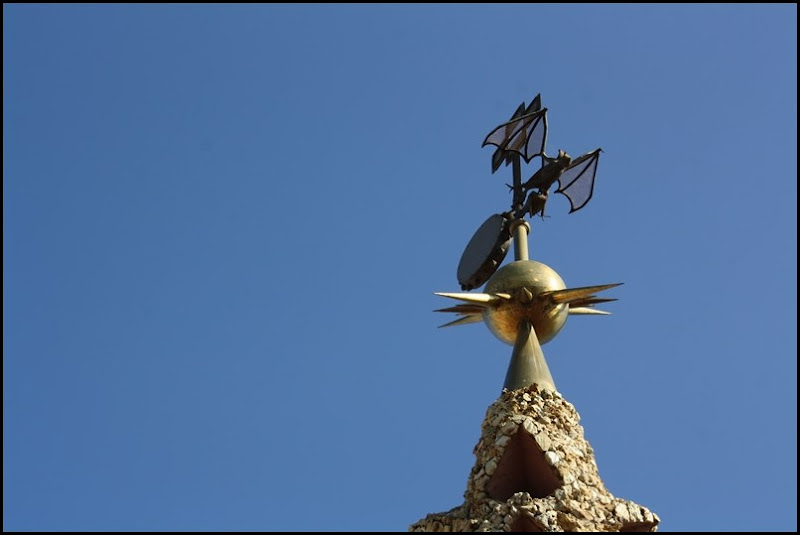 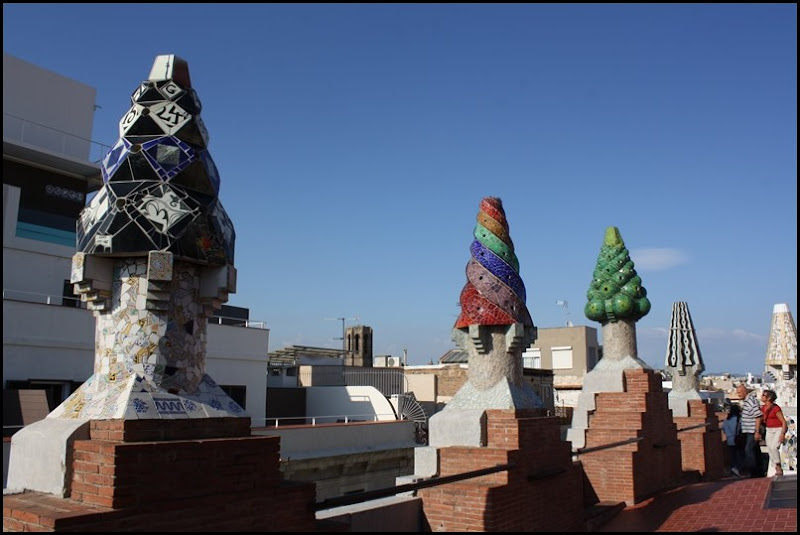 Palau Guëll costs just €12 to get in and the admission charge includes the use of an especially interesting and informative audio guide which is very helpful. Of all the places I’ve paid to enter in recent months, this was the money best spent and I would absolutely recommend a visit. Also worth noting is that Palau Guëll open their doors for free on the first Sunday of each month but tickets are naturally limited and you must be there at 10am or 3pm in order to claim tickets.