Theatre: A View from the Bridge

On the Bank Holiday Monday, Stephen took me to the Duke of York’s theatre to see A View from the Bridge.  I was really excited to see this play as it was my birthday present and the main attraction was to see Harry Lloyd, a fine young actor who I am mad about (he played Will Scarlett in Robin Hood).  Stephen is either very confident or very crazy as he absolutely supports the occasional crushes that I develop on film and television stars.  It reminds me of the old Love Is… cartoon that said “Love Is… taking her to see Tom Jones”. 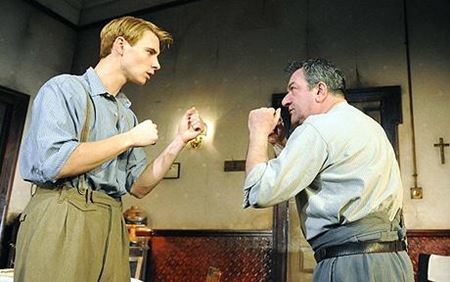 A View from the Bridge was written by Arthur Miller and premiered in its current two-act form in London in 1956.  It is the story of an American family that takes in two Sicilian immigrants and the subsequent jealousy and betrayal as their young niece falls in love with one of the immigrants.  Hayley Atwell starred as the niece, Catherine Carbone and her aunt and uncle were played by Mary Elizabeth Mastrantonio and Ken Stott respectively and Harry Lloyd played the role of Rodolpho (the object of Catherine’s affection).

I find it quite odd that so many of the reviews (for instance this one) critiqued the story itself and the nature of the play.  To me, you can study a classic film or play and analyse the message that the writer or director was trying to convey or the use of various techniques.  It seems strange to me to criticise that work though or pass judgement on it.  The fact is that yes, the play was written during the aftermath of the McCarthy witch hunts in the US and that the story mirrors the themes of betrayal and victimisation that Miller was experiencing at that time.  The above review criticised the use of the narrator which is crazy; it’s like reading Shakespeare and criticising his use of the soliloquy to convey his protagonist’s thoughts.  It is a classic body of work and it’s not like the writer is going to read your review and do better next time – he is long dead! I am sure the academics and English students among my readers disagree though. 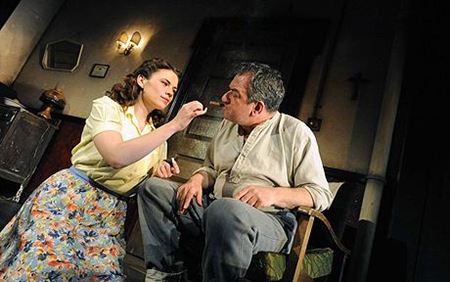 I really enjoyed this play and found it both funny and tragic.  The set design was great and the costumes were quite authentic too.  I had heard that there were a few problems in earlier performances with Ken Stott fudging his lines and a lack of cohesion in the cast.  I am pleased to say that this was not the case in Monday’s performance.  The acting was superb and the accents were good too; all in all it was a good theatre experience.

During the break, I saw the stunning Andrew Buchan from the show The Fixer in the audience.  I know this is going to be hard to believe, but the man is even more beautiful in real life than he is on screen.  I thought I was going to stop breathing when I saw him and Stephen was quite amused when he told me to stop staring (in my defence, my mouth may have been wide open but I was watching his reflection in a mirror and not staring directly at him). Anyway, I managed not to make a complete idiot of myself (as I did when I met The Parlotones) and I left the poor man alone.  It was very exciting to be two metres away from two of my favourite actors though.  A very happy birthday indeed!