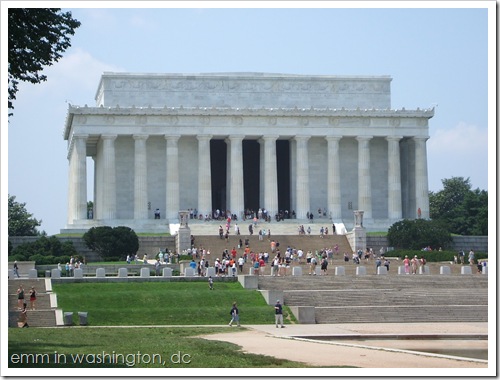 I finally managed to tear myself away from the cool fountains of the National World War II Memorial and I walked towards the Lincoln Memorial.  It is quite an impressive old structure and was built to honour Abraham Lincoln, the 16th President of the United States. 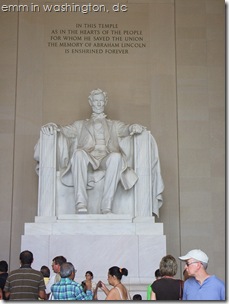 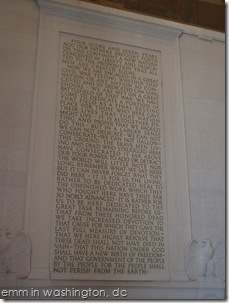 Like everyone else, I had seen the memorial and the sculpture of Abe Lincoln several times on television but nothing can quite prepare you for seeing it in person.  It is really quite impressive! [You can click on the photos for enlargements].

There is a museum underneath the memorial and it is so interesting!  I had not realised that Abraham Lincoln was such an amazing individual!  I found the exhibits to be really inspiring and I’d love to read more about this man and his ideas. 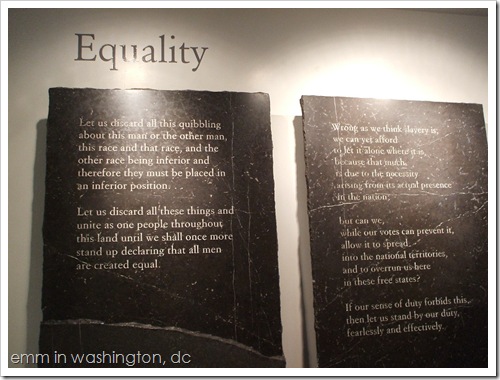 In fact, I’d like to learn more about Abraham Lincoln and visit the memorial again one day.  Sometimes, you see an exhibit and can learn a lot from it, without having previous knowledge.  But sometimes, you just know that there is so much to take in and so much that you should already know and a lot of the information is lost on you.  I felt a bit like that on that day. 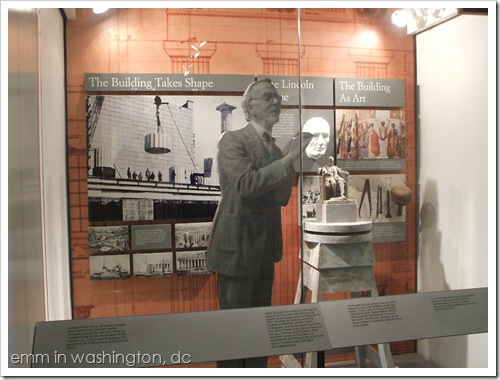 A fascinating aspect of the exhibit underneath is the story behind the monument itself and how it is a work of art in itself.  It is a lovely memorial and it is obvious that a lot of thought went into it.

After the cool and air-conditioning basement, the sweltering outside heat was almost too much for me to bear!! From my notebook:

“I’ve just made two failed attempts to go outside.  I cannot begin to tell you how hot it is and for a South African to say that, you must know how hot it is.  I’ve been really inspired by Lincoln.  What an amazing man and a superb orator.  I think Ill research him”.

Eventually, I did make it out and I took this lovely shot of the Washington Monument with the Capitol in the background. 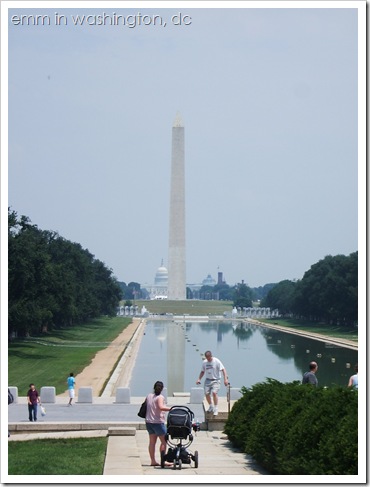 I then made my way to the Vietnam Veterans Memorial.  This was the reason why I had to come to Washington, DC; why I pushed myself to do so much in New York so that I could spare one day there. 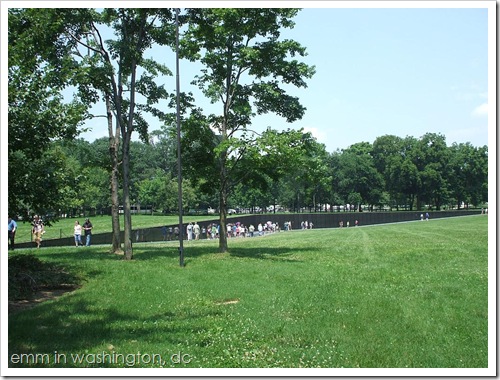 Again, from my notebook:

"Long before my obsession with Rwanda and genocide, there was my obsession with the Vietnam War. Starting at age 11 when I saw the The Deer Hunter, I read everything I could about the war and saw all the films I could lay my hands on.  I’m left with the same question today as I was 25 years ago.  Why?

These days I have a new question.  When are they going to start acknowledging and memorialising those who have died in Kuwait, Iraq and Afghanistan”.

It is possible that I was delirious from the extreme heat by then!  And no, I would never recommend that you let your 11-year-old child watch The Deer Hunter but I was a devious little child and watched it while my parents were out. 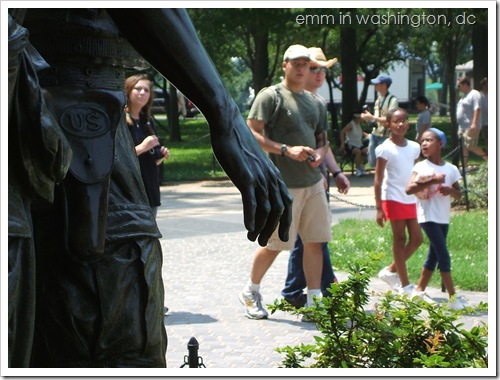 Interestingly enough, the Memorial was inspired by Jan Scruggs after seeing The Deer Hunter as it reminded him of those who had died and suffered in Vietnam. 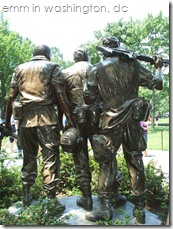 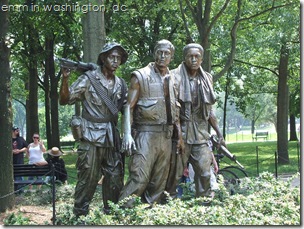 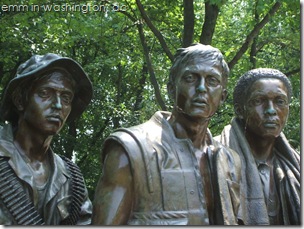 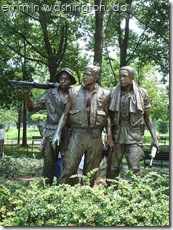 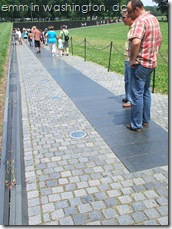 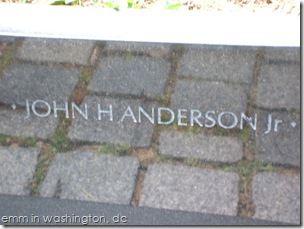 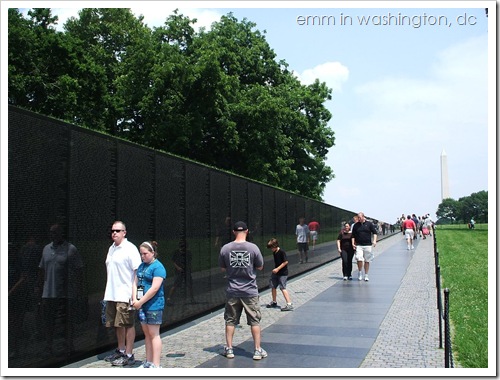 What an absolute waste of lives.

Time seemed to have slowed down to an almost standstill by now.  It was only 2pm and yet I seemed to have done so much in two hours!  I walked back past the Washington Monument and took numerous photos again… 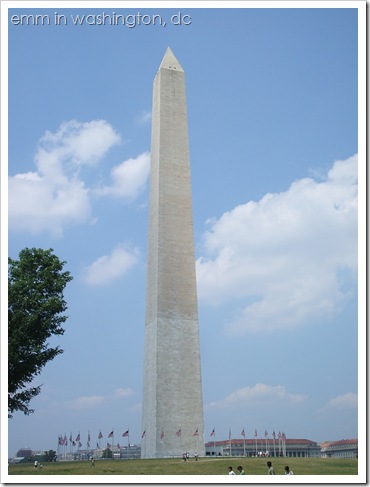 …and I saw the Thomas Jefferson Memorial in the distance. 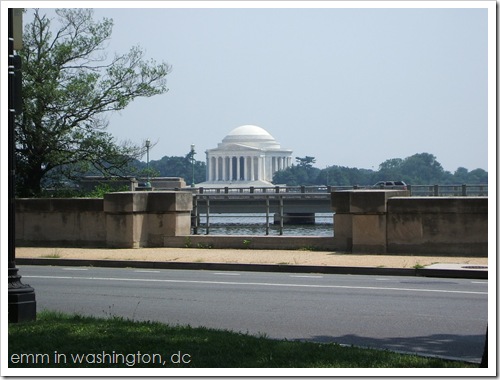 I would have loved to have explored the Jefferson Memorial but I decided to keep going and seek the cool interior of the Holocaust Museum instead.