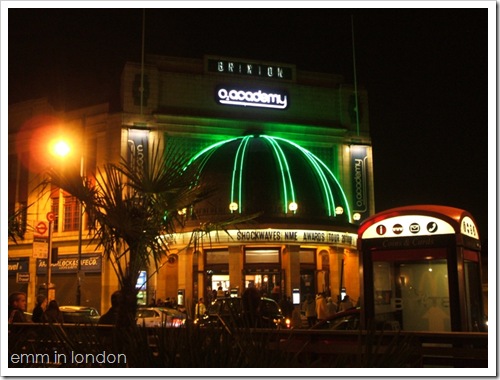 NME is the biggest alternative music publication in the UK.  Each year they showcase some of the biggest up and coming indie alternative bands in the run up to the NME Awards.  This year The Maccabees, Bombay Bicycle Club, The Big Pink and The Drums hit the road on a nationwide tour and I caught them at The Brixton Academy in London.

The Drums are a post-punk band hailing from Brooklyn, New York and it is likely that you would recognise their song “Let’s Go Surfing”.  They are currently on a sold out tour of UK, Ireland and mainland Europe and will be supporting Florence and the Machine on their nationwide tour starting in May.

The Drums have a sound reminiscent of the punk and ska bands of the early eighties but I found them to be pretty average and unoriginal. I had not even heard of them before the night but certainly won’t be rushing off to buy any of their albums.  Most importantly, I have never seen a bunch of people look so uncomfortable on a stage before.  I’ve seen cheesy robotic dancing before and singers playing air drums but it is clear that The Drums have a long way to go as a band before they make that look cool. 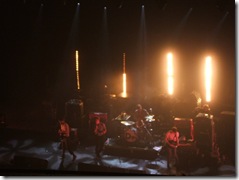 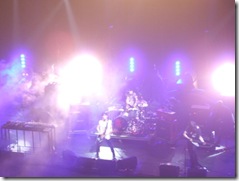 The Big Pink are the reason we went to the Shockwaves NME Awards Tour this year and it is safe to say that I am a massive fan of their album A Brief History of Love which I reviewed on BlogCritics in January.  The Big Pink arrived on stage with lights and explosions and their whole set was energetic, frenetic and loud.  Their songs were much heavier than they had sounded on their CD and it was a manic mash up of squealing guitars and noise.

I imagine that this signals a heavier direction for their new album but it could also be overcompensation for the fact that most of their music is pre-recorded and sampled.  That meant that vocalist Robbie Furze was screaming his vocals and grinding his guitar while we debated amongst ourselves whether the bassist and drummer weren’t in fact miming.

I am always happy for indie alternative bands to take on a heavier, louder sound; in fact, the noisier the better as far as I am concerned.  But this was not a great performance.  I’ve seen many bands that use heavy sampling including The Prodigy, Dan le Sac vs Scroobius Pip and Faithless and it is so difficult to put on a great show in front of a massive audience when the majority of your band members are doing little on the actual night but miming.  The Big Pink didn’t really get it right on Saturday night.

Bombay Bicycle Club hail from north London and took their name from a string of curry restaurants in the area.  I have no idea what I expected from them before I heard them play on Saturday night as I had barely even heard of them but wasn’t in the least bit interested in listening to any of their music.

I certainly didn’t expect to have them rock my socks off.  Seconds into their first song, I found myself debating whether to rush off to the shops the next day or order their album through Amazon.  Thankfully, such debates were soon put out of my mind as I got caught up in their energetic, enthusiastic set.

The one thing they did prove was that the problems with the previous two acts weren’t down to bad acoustics in the venue because their whole sound and lights show was fabulous.  Jack Steadman has a fantastically unique voice and the band are confident and exciting on stage.  Oh, and they can dance.  Perhaps the guys from The Drum need to take some dancing lessons from them.

The crowd went mad for them and I would have to say that Bombay Bicycle Club were the best band of the night.  It is not often that I am won over to unknown bands during a live performance but they were that good. 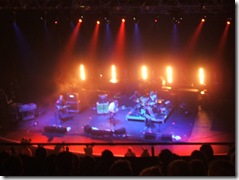 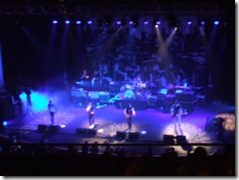 The Maccabees played a massive fifteen song set on Saturday night and gave one of the most impressive live performances I have seen in years.  The Maccabees are from south London but are currently based in London.  They have five full time members but their incredible show included three musicians on brass instruments and at one stage Edwyn Collins joined them to sing “Rip It Up”.

The Maccabees use the whole stage and everything from their backdrop to their set up and lighting is absolutely professional and first class.  I honestly found myself widening my eyes to try drink everything in.

Like with Bombay Bicycle Club, the sound was perfect and the crowd went absolutely mad for The Maccabees.  They didn’t quite have the impact on me that Bombay Bicycle Club did but that is not to say that they weren’t brilliant.  They were really good and I’d definitely go see them again sometime.

After a rocky start, the ShockWaves NME Awards Tour 2010 was a huge success and Bombay Bicycle Club and The Maccabees certainly made up for a slightly shaky start.  The best thing about the O2 Brixton Academy of course is that after the show, we were able to nip into Nandos for some chicken burgers thus avoiding the British tradition of the post-night out dodgy vindaloo.