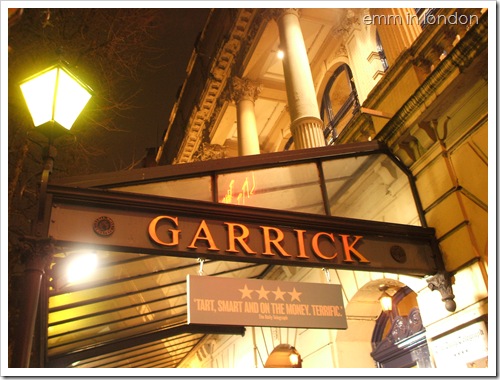 On Tuesday night, we went to see the Garrick Theatre production of Douglas Carter Beane’s The Little Dog Laughed.

The Little Dog Laughed is about a rising Hollywood star Mitchell (Rupert Friend) who in the words of his agent “suffers from a slight recurring case of homosexuality”.  He meets rent boy Alex (Harry Lloyd) and their lives are turned somewhat upside down when they both fall for each other despite both asserting that they are not gay.  The play is set against the backdrop of Hollywood and homosexuality and explores all of the double standards and difficulties with coming out in show business.  There is a fantastic quote by Colin Firth in the programme which just about sums it up:

“If you’re a straight actor who takes on the role of a gay man, it’s obviously not the same as being one in this business”.

The Little Dog Laughed was written by Douglas Carter Beane who also wrote To Wong Foo, Thanks for Everything! Julie Newmar, a 1995 film starring Patrick Swayze and Wesley Snapes.  It first opened off-Broadway at the Second Stage Theatre in 2006.

The play is narrated by Mitchell’s morally challenged agent Diane (played by Tamsin Greig) who has such classic lines as "A writer with the final cut? I'd rather give firearms to small children”.  It is no secret really that I am a massive fan of Harry Lloyd and have spent the past three years watching each and every one of his plays but it is Greig who absolutely steals the show and her acting, wardrobe and personality all fit the role perfectly.  In her role as Diane, Greig superbly breaks through the fourth wall, allowing the audience into the world of Hollywood agents, actors and writers and she did it very well indeed.  She was incredibly comfortable chatting and winking to the audience one minute and then diving right back into her encounters with the rest of the cast the next. 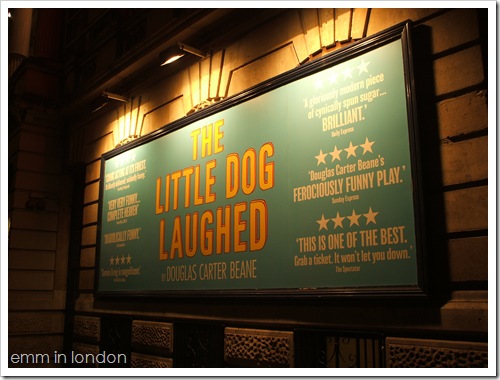 Rupert Friend plays the drunken, privileged and somewhat sheltered Mitchell really well.  While I tend not to question how characters were written (as it is generally a fixed factor when putting on a play), I have to wonder at a rising Hollywood star who doesn’t get the significance of coming out to the world and the effect that could have on his career.  In the end, his naiveté is what trips him up though.

In an equal sense, Harry Lloyd’s Alex just doesn’t seem to understand the dynamic of his relationship with his girl pal Ellen (played by Gemma Arterton) and the effect that his growing relationship with Mitchell will have on her.  He does, however, utter my favourite line of the play while trying to get a point across to Mitchell: “God, talking to you is like sewing a button on cottage cheese”.

As far as rather shallow, clueless roles go, Friend and Lloyd do as well as they can do but they have both taken on much better roles in the past.  The one thing they do both handle extremely well is the intimacy and affection that develops between their two characters.  There is a fair bit of nudity in the play (with Harry Lloyd being fully nude at one point) and both actors were professional and convincing in their roles.

Gemma Arterton was far less convincing and you got the idea that she was trying to inflate her supporting role somewhat as the character definitely shrinks in comparison to the other three.  She seemed to posture a lot and to shout her lines rather than speak them with meaning and emotion.  She is quite inexperienced in theatre though and this certainly didn’t ruin the play.  You have to wonder though if those in casting didn’t foresee that she would be completely overshadowed by Greig (or perhaps that was the point?) 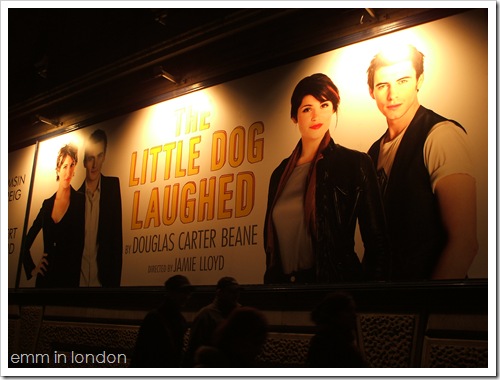 This production of The Little Dog Laughed was directed by Jamie Lloyd and I must say he made good use of the space and actors.  There is one invisible character, so to speak, who appears in one scene and speaks on the phone but is not played by anyone.  I thought this was really well portrayed by the cast and well managed by the director.

The set was designed by Soutra Gilmour who received an Olivier Award nomination for Best Set Design in 2009.  While Gilmour’s sets are often dark and almost sinister, this was stark, bare and completely white but the minimalist set worked in this play.

The play itself is incredibly funny and highly entertaining.  It doesn’t provide any grand answers to the problems it identifies but seems to focus more on the situation at hand and how that plays out.  The audience was laughing along raucously at the numerous one-liners and there was much enthusiastic clapping and cheers of “bravo!” at the end.

All in all it was a fun night out and I’d certainly recommend the play for people seeking a light-hearted comedy experience.

The Little Dog Laughed is playing at the Garrick Theatre until 10 April 2010.  There are really good prices available on tickets at LastMinute.com and we got tickets for £29.50 each from WestEndTheatre.com.