A couple of weeks ago, I met up with a group of other expats to visit the Enchanted Palace exhibition at Kensington Palace.  This peculiar yet magical exhibition tells the story of seven princesses who have lived at Kensington Palace throughout the ages and visitors are tasked with discovering the identities of all seven.

I am terribly tempted to let out all of the secrets I uncovered in the Palace but I suppose I will have to make some attempt at keeping the names of the princesses secret!  See if you can guess them all – not just their names but who they actually were. 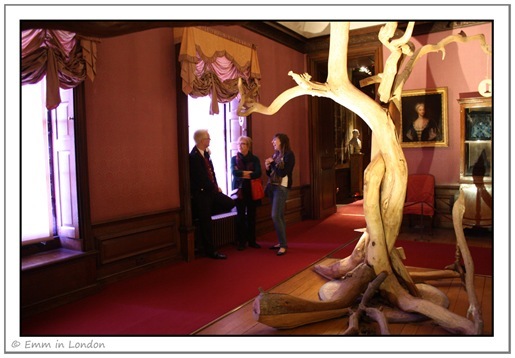 We began in the Room of Beginnings, which I am sure you will agree is a very good place to start!  We encountered a charming Explainer who was only too keen to share his impressive knowledge of British royal history.

We were given a map as we entered but luckily there were very helpful hands to show us where to go next. 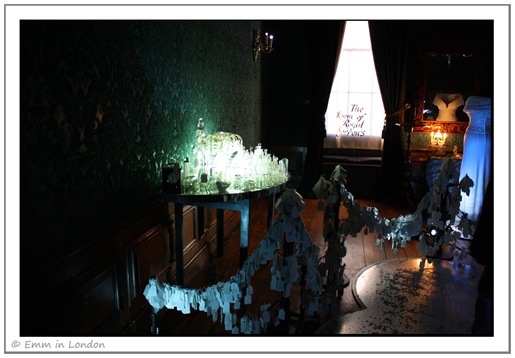 The Room of Royal Sorrows told the story of a princess who wept when she was betrothed to a much older man and then wept again when she could not produce an heir.  We were told her name was Mary but can you guess which Mary?

The exhibition is really charming and interactive.  In each room, you can find the name of the room tucked away somewhere, as well as the names of the princesses in seven of the rooms.  It would really be fun to take children along as they can dress up as princesses and be challenged to find al the clues. 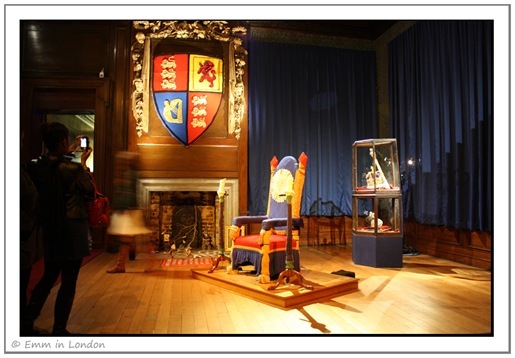 In the Room of Enlightenment, we earned all about Princess Caroline’s admiration of philosophers, theologians and scientists such as Sir Isaac Newton.  The next room was the Seat of Power, a strange room where voices echoed and visitors were encouraged to declare their dreams and wishes out loud.

The cherubs on the overmantle were especially interesting.  They were commissioned by King William III following the death of his wife Mary in 1694 and the artist Gibbons took care to carve sad faces in a reflection of William's grief. 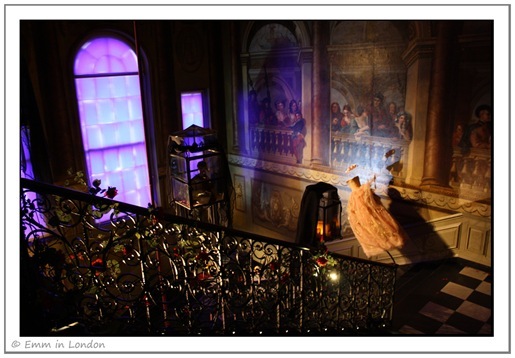 My very favourite room was the Room of Flight.  I was already enjoying the room, with its lighting and photographic opportunities, but then I heard the Explainer telling the story of the princess and I was fascinated.

Having witnessed the effects of her parents unhappy, pre-arranged union, this princess fled from her arrangement to marry William, Prince of Orange and instead married for love. Her union to Leopold of Saxe-Coburg-Saalfeld was short-lived though, as she died in childbirth.  Such was the height of the princess’s popularity that the nation plunged into a state of mourning resulting in a shortage of black cloth that lasted for several years. By now I am sure you have noticed that the Enchanted Palace exhibition is more than a little macabre.  In the Room of Palace Time, we learned that some Palace stories repeat themselves endlessly.  The exquisite Clock of the Four Monarchies in the photo above has four painted scenes, which tell the tragic stories of four great monarchies of antiquity.  Needless to say, I was thrilled to discover that one of the scenes represented the most tragic monarch of all time, Queen Boudica.  The clock was made by Charles Clay and John Pyke and set up in the room by Princess Augusta in 1743.

I was absolutely impressed by the clock, ornate ceiling and finishes in this room.  Kensington Palace really is quite stunning and it will be worth a visit when the building works are complete. 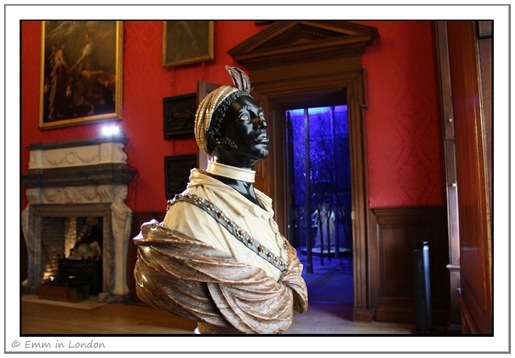 The Room of the World, the World in a Room was an adventurous room that reminded me of the exotic tales in Around the World in Eighty Days.

The room tells the story of the famous princess who could only understand the world around her by collecting it.  This is another stunning room with impressive artwork. 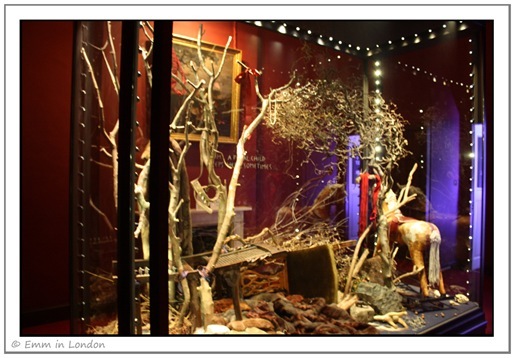 The Room of Royal Secrets tells the astounding story of Peter the Wild Boy, a feral child who was kept as a pet by King George I.  I tell you, the more I learn about British history, the more I feel that it is stranger than fiction! 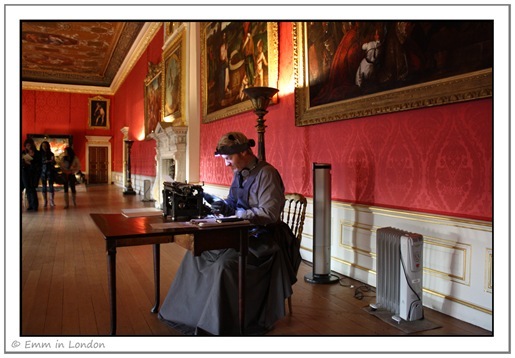 In the Gallery of War and Play, we met up with one of the Detectors.  Let me tell you, these people are stark raving mad, perhaps due to the centuries they have spent looking after the Palace and its inhabitants.

The room had a wind dial which I thought was quite stunning.  It is powered by a weather vane on the roof but has to be disconnected in high winds. The room was a reminder that princes also lived here, as well as princesses.  We were challenged to guess how many toy soldiers there were and I correctly guessed 6,000!  The Explainer didn’t seem to believe me that I counted them (using my awesome counting skills!) 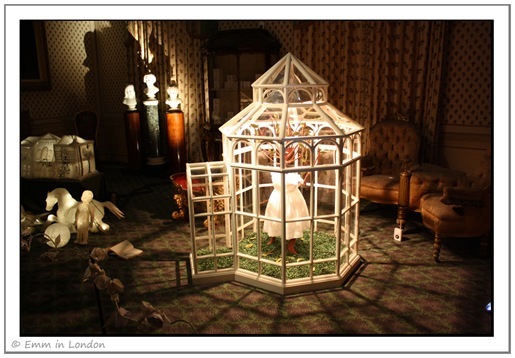 The Rooms of Lost Childhood were quite sad actually, a reminder that all too often, young princes and princesses were expected to grow up well before their time.  They were to be seen and not heard, brought up by nannies and governesses, and generally ignored by their parents.  When they were in the company of their parents, they could not act like children but had to be properly behaved and attired at all times.

I imagine it was a very lonely upbringing, especially for those that were only children. 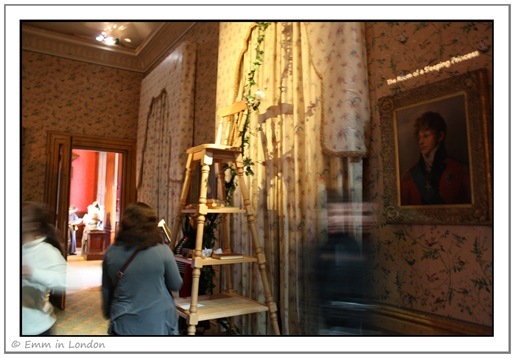 The Room of a Sleeping Princess gave us a glimpse into how charming a princess’s bedroom could be and how her dreams could become her sanctuary.

In this room, a princess woke up one day to find that that she was queen.  She would not even have become queen were it not for the death of the princess in the Room of Flight. Two princesses were remembered in the Room of Dancing Princesses, including perhaps the most tragic of them all.  After spending so long in centuries gone by, we were suddenly brought into the 20th century with its music, glamour, fashion and film.

These princesses loved to dance and to socialise and in their own way, they captured the hearts and imaginations of people around the world. 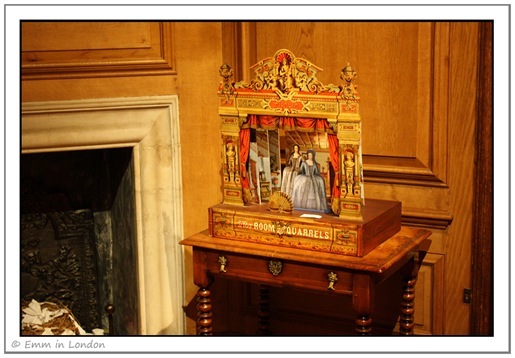 One last room and one final princess was to be found in the Room of the Quarrel.  This is the room that tells the story of how an argument lead to the severing of a lifelong friendship between a queen and her best friend.  That silly Sarah Churchill had begun to abuse her privileged position and they had an argument so severe that it is said that they never saw each other again.

This is a temporary exhibition open while building works are taking place at the palace and it is only open until 3 January 2012. It is such a pity that the exhibition is only running for another couple of weeks as it really is quite magical.  If you travel by train, you can get 2-for-1 entry which means it only costs about £12 per couple to enter.

Thank you to Jen from She Went Away for organising this great day out, it was good to see you and Lindsay (hope you got over your cold).  It was great to see Melissa from Wanderlust and her boyfriend too and I finally got to meet Oneika from Oneika the Traveller!