The Splendour of Lille’s Grand’Place 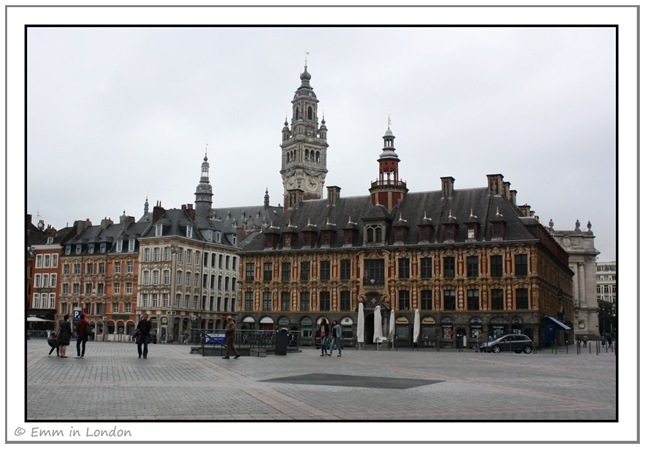 In the heart of Lille, you will find the Grand’Place, the favourite meeting place of countless generations of Lillois.  It was once home to an important medieval market and today displays a proud array of architecture from the 17th to the 20th century.

In 1944, the Grand’Place was officially renamed to the Place du Général-de-Gaulle in honour of Charles de Gaulle who was made an Honorary Citizen of the City of Lille. It can be confusing as signs, maps and guidebooks refer to both places but it is one and the same.

Dominating the square is La Vieille Bourse, the site of the old Stock Exchange which was built from 1652 to 1653. 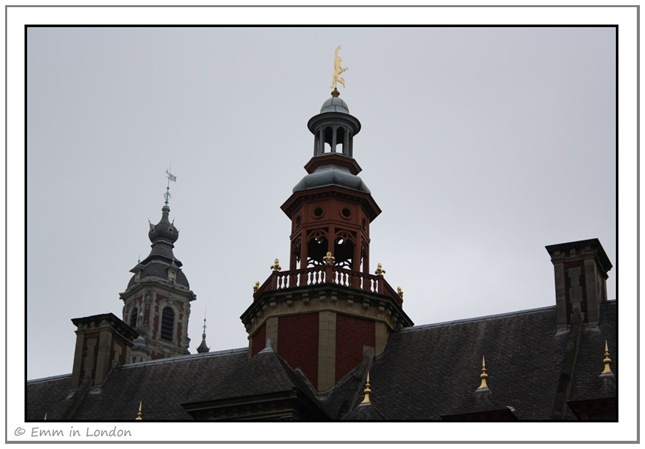 La Vielle Bourse is a truly spectacular example of 17th century Flemish renaissance style architecture and is notable for the intricate detail on its facade and the gilded figure of Mercury dancing upon the ornate belltower.  La Vielle Bourse is made up of 24 identical townhouses that open up onto a central gallery overlooking a courtyard. 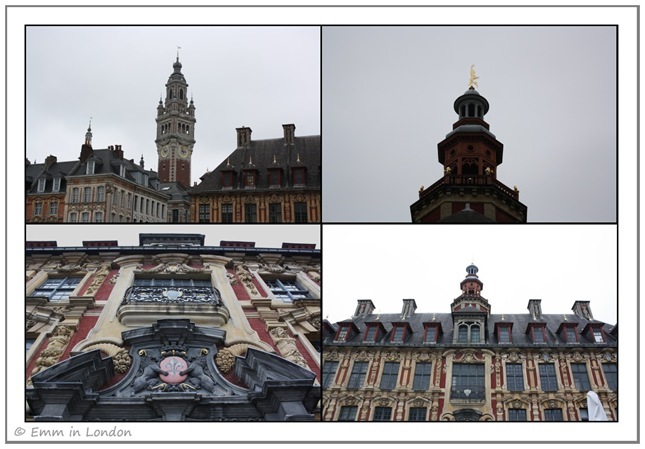 Today, you can walk through the central courtyard of La Vielle Bourse and browse through the books or records on sale under the ornamented archways.  At night the courtyard is often cleared to make way for dancing couples. 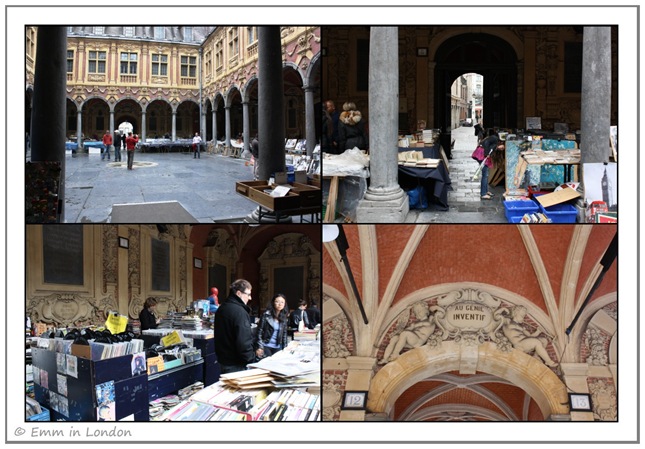 Mercury is not alone in gracing the Grand’Place and there are in fact four very important women looking out over the square. The first is the statue of the Goddess, standing above her column to commemorate Lille’s successful resistance to the Austrian siege of September 1792. Despite being surrounded by an Austrian force of 35,000 men who pummelled the city with cannonballs, the far smaller Lillois force stood firm, causing the Austrians to give up and retreat eight days later.

There are still houses in Lille that bear cannonball damage to this day.  Sadly, we’ve only seen photos of these houses with their distinctive circular scars but we did not find any ourselves. 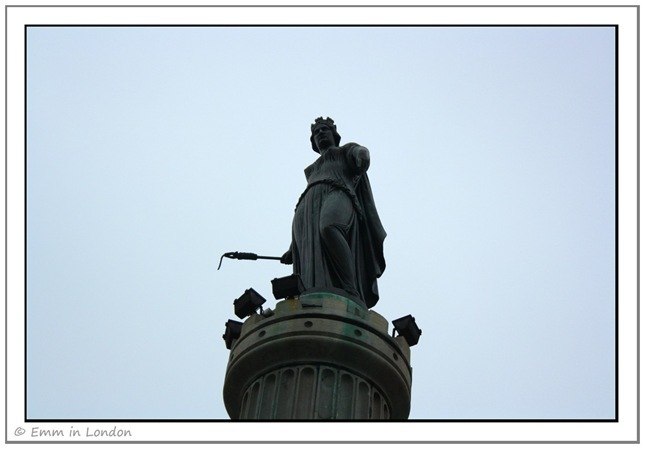 In addition to the Goddess, the statue of three women stands watching over the Grand’Place at the pinnacle of the stepped roof of the La Voix du Nord building.  Known locally as the Trois Grâces (Three Graces), they represent the three former provinces of the region: Flanders , Artois and Hainault.  La Voix du Nord is the regional newspaper (The Voice of the North)and has been running since 1941 when it was an underground newspaper of the French resistance. 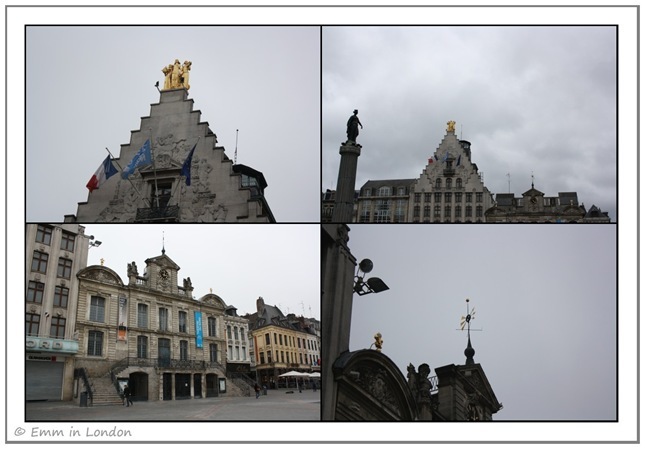 It is quite easy to walk past the former site of the Grand’Garde with its classical architecture and dominant staircases but the building above once housed the soldiers from the King’s sentry guard.  Today the Grand’Garde (meaning “the outpost”) is the home of the Théâtre du Nord.  Like I said, we walked right by this building as our eyes were firmly on La Vielle Bourse but it does have some lovely details, including the weather vane on the triangular pediment, depicting the sun, emblem of King Louis XIV. 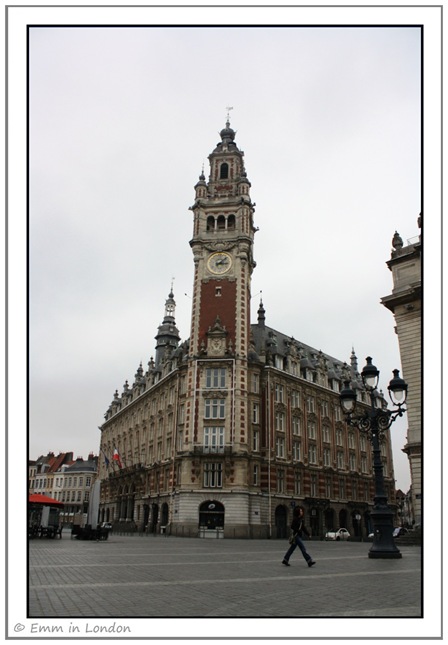 Wherever you stand in the Grand’Place, you can see the splendid 76 metre high belfry of the Chambre de Commerce peeking out behind La Vielle Bourse.  This beautiful neo-Flemish building is the official home of the Lille Chamber of Commerce and is situated in the Place du Théâtre behind the Grand’Place.  Built between 1910 – 1921, it was designed by architect Louis-Marie Cordonnier who chose to design the building in line with the nearby 17th century houses.

Next to the Chambre de Commerce is the Opera de Lille with its beautiful high relief of Apollo and his muses. 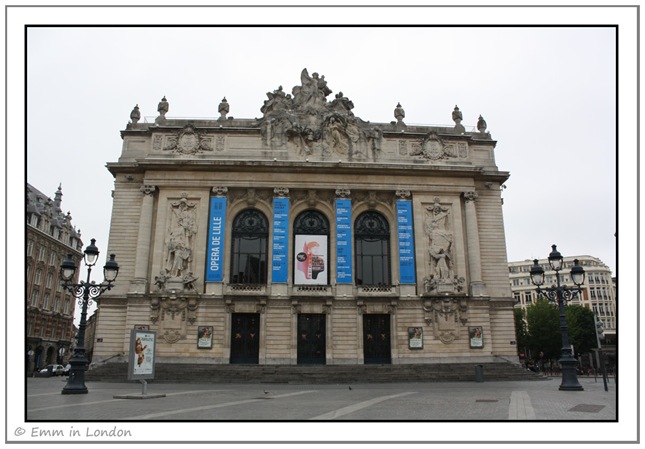 Opera de Lille boasts a full calendar of opera, dance and concerts each year and is one of the reasons that Lille is such a popular Eurostar destination.  One thing is for sure, their tickets are far more affordable than the Royal Opera House in London. 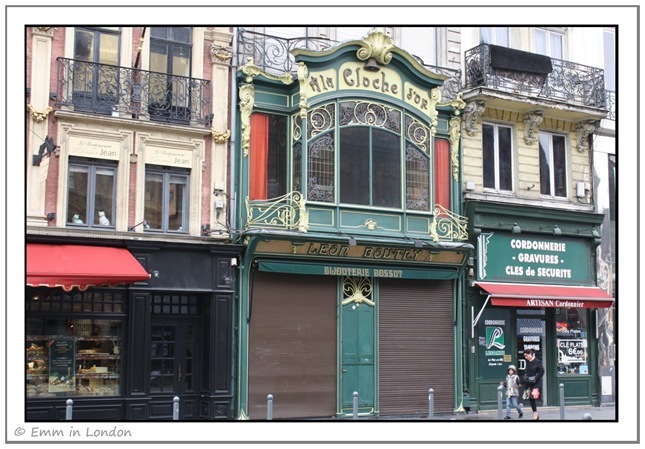 Finally, just before we exited the Grand’Place and began our stroll through the narrow streets and alleyways of Old Lille, we took the time to appreciate the old storefronts of the businesses facing the square.  I thought that these looked magical and reminded me of fairy tales about clockmakers and shoemakers, poor little match girls and whimsical princesses.  Have I mentioned that Lille really inspired my imagination? 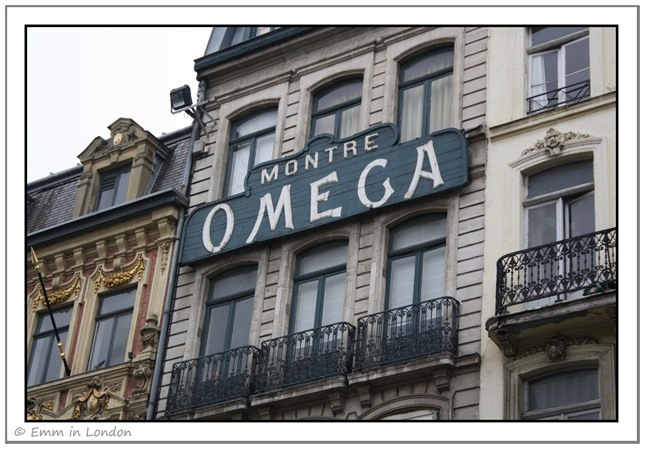