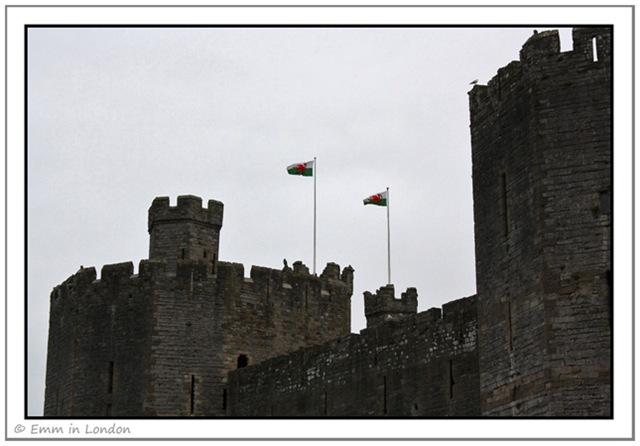 There is no denying that I’m a bad blogger.  Sometimes I let life get it the way of writing new posts and at other times I get distracted by new trips and neglect to finish blogging about old ones.

Every now and again, it is neither life nor distraction that prevents me from blogging, it is something else.  When we went to Caernarfon Castle in Wales last June, it was a cold, wet and gloomy day.  I was really disappointed by the weather, especially seeing that the sun is my Automatic Photographic Enhancer™.  So needless to say, I wasn’t too pleased at the time with how my photos came out.

During our trip to Windermere in June this year, I learned to appreciate dull weather, to embrace the clouds and gloominess.  You kind of have to when you’re vacationing in Britain during the ‘summer’.  I’m glad I did because it made me revisit the photos I had taken of Caernarfon Castle and I’d like to share some of my favourites. 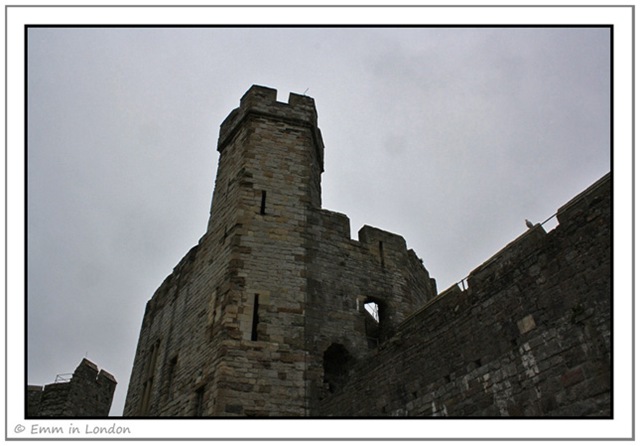 Caernarfon Castle is one of the castles that Kind Edward I built in the north-west of Wales in his attempts to rule over the Welsh population.  Construction began in 1283 but like Beaumaris Castle on the Isle of Anglesey, the castle was never really completed.  Walls were built around the entire town of Caernarfon between 1283-1285 and I wrote about the town walls of Caernarfon previously. 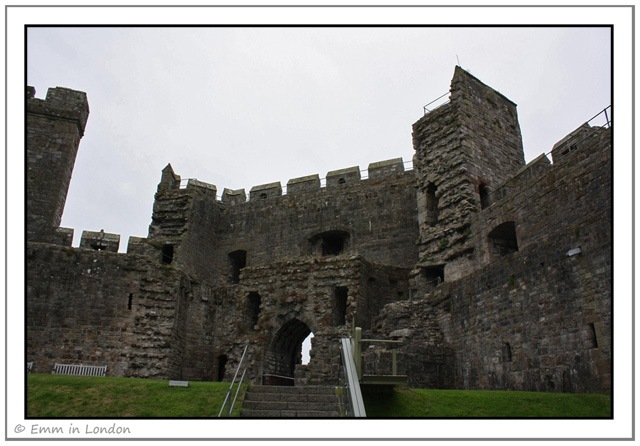 It is pretty significant because here in the courtyard, on that circular plate, is where Queen Elizabeth II invested Prince Charles with the Prince of Wales coronet in 1969.  He was formally named the Prince of Wales in 1958 but his investiture was conducted when he was 21 years old. 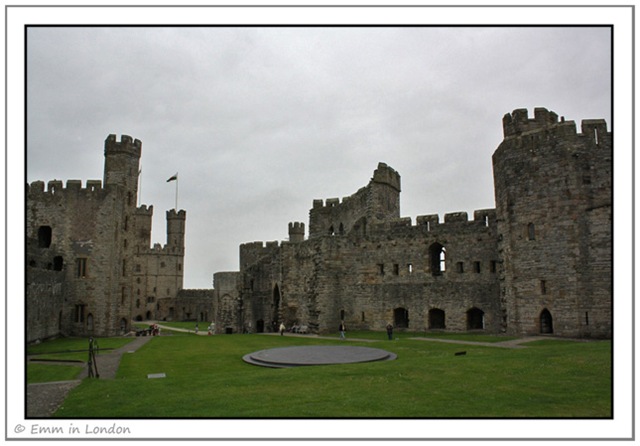 I love exploring castles and my favourite part of the experience is walking along the narrow corridors inside the castle walls or climbing up the dark, steep stairs to walk on top of the walls. 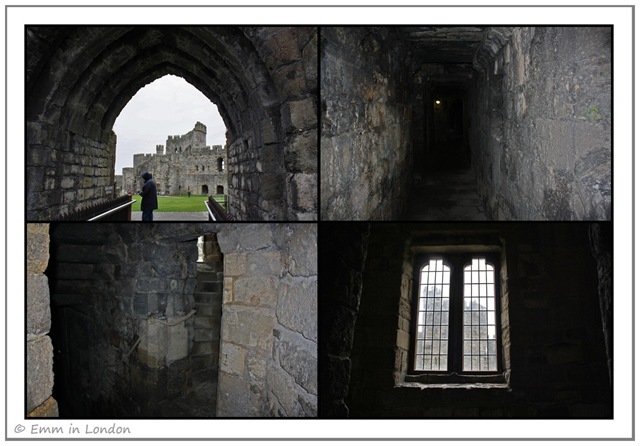 I like to lay my hands on the cold stone and imagine what those walls might have seen. It is a little bit more difficult with Edward I’s castles because so many of them were not finished and they weren’t actually lived in. Still, I like to let my mind wander just a little bit. 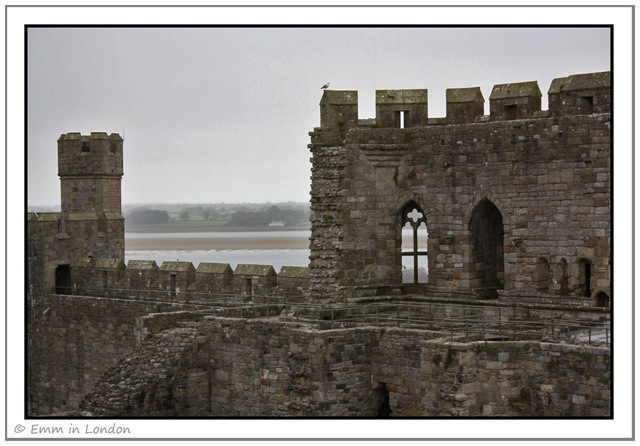 Caernarfon Castle is vast and it is perhaps the biggest castle I have visited in Britain.  It is a reflection of how strategically important Caernarfon had become and in his book The Medieval Castles of Wales, John Kenyon estimates that £12,000 was spent on the castle by 1292 (approximately £5 million today) and only the eastern part of it was built between 1283 and 1292! 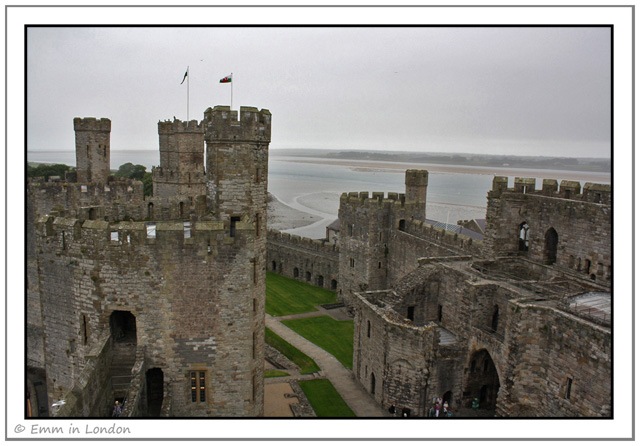 I imagine that you could only get a complete photo of the castle from over the water but the views from the castle walls were breathtaking, even in the inclement weather.  The tower you can see to the left in the photo above is the Black Tower and that is the King’s Gate to the right. 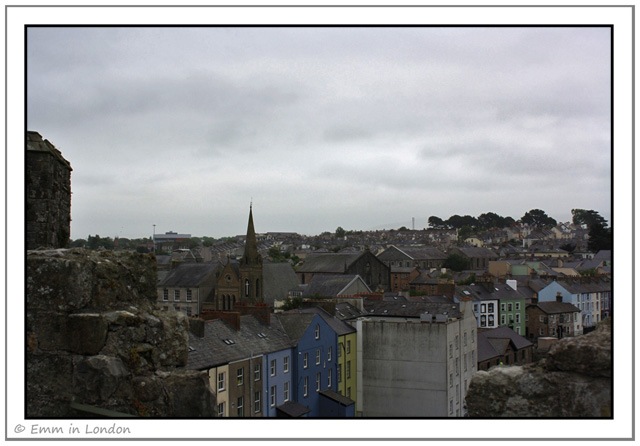 These houses lie outside the boundaries of the Caernarfon town walls.  I adore their bright and colourful facades! 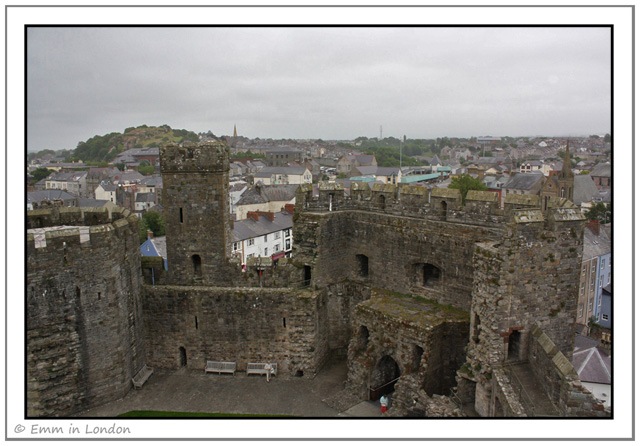 Did I mention that it was wet and cold the day that we visited the castle?  I was beginning to wonder about the wisdom of my decision to climb nearly every tower in the complex but I was certainly rewarded I reached the top of the Chamberlain Tower.  You can see the North-East Tower, the Watchtower and the Queen’s Gate in the photo above. 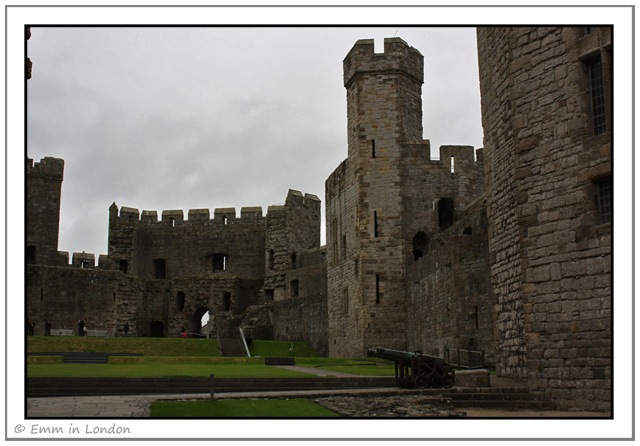 In addition to the immensity of the castle complex, the castle also houses the fantastic Royal Welch Fusiliers Museum.  I would suggest that you put aside at least 2-3 hours for your castle visit.

Have you ever been to a castle before? If so, which is your favourite?