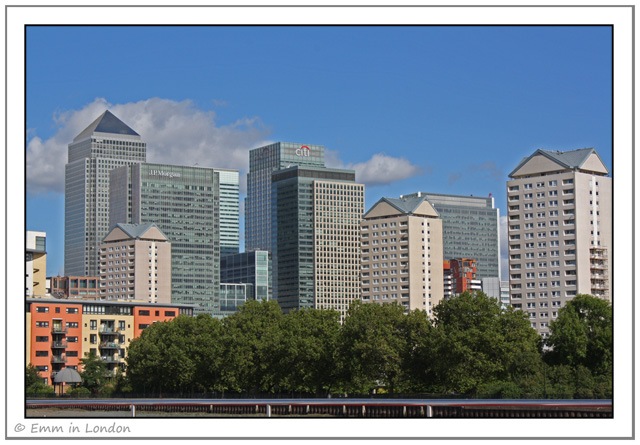 I have a confession to make – I’m a little bit confused.  Every tour I’ve been on before has said that the building on the far left above, the one with the pointed roof, is Canary Wharf and that the general area is simply named Canary Wharf after this building and its proximity to Canary Wharf tube station.

Well, it seems like that is a bit of an urban legend.  That particular building is called One Canada Square which used to be Britain’s tallest building until The Shard took that title in mid-November 2010.

Canary Wharf in fact refers to the entire business district, of which over half is owned by the Canary Wharf Group.  For the longest time I really wanted to work in Canary Wharf but I think I’m happy where I am for now.  I’m just not naturally comfortable in tailored suits.

This photo was taken from a Thames Clipper three weeks ago.  In my opinion, the very best view of Canary Wharf at night is to be found at the steps down from the North Greenwich bus station to the drop off zone below.  One day I will capture that view.