Falling in Love With Mostar

It is little surprise that I haven’t found much time for blogging since my return to London as I’ve been putting the final touches on my project which I will submit this Friday. Nevertheless, I can’t stop talking about Bosnia and telling people how much I loved it and how I want to return there to live and work. I don’t think I can wait any longer and so I thought I’d give you a sneak peek at my time in Mostar.

Mostar was the scene of bitter fighting in the Bosnian War twenty years ago and the bridge that you see in these photos, known as Stari Most or Old Bridge, was bombarded by shells until it finally collapsed into the Neretva River on 9 November 1993. The story of the rebuilding of the bridge is incredible, and a story for another time, but I will tell you that the bridge was reopened on 23 July 2004 and it is amazing how much of the town has been rebuilt in those 9 years (seeing as much of it was still in ruins 9 years ago). 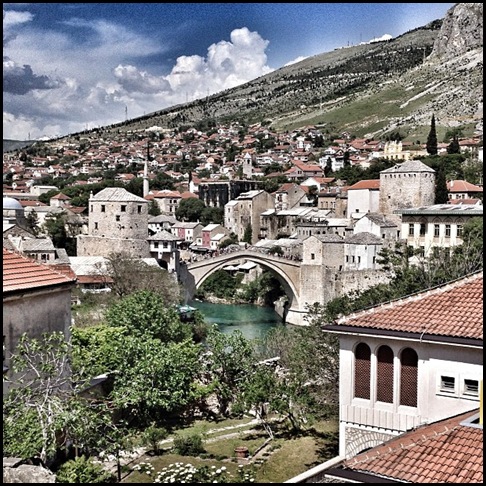 This was the view of Stari Most and Old Town Mostar from the balcony of our hotel, Villa Anri. I gave them a gushing, 5-star review on Trip Advisor so I have no hesitation in linking to them here. This is the sight I woke up to on my 40th birthday and it was amazing. 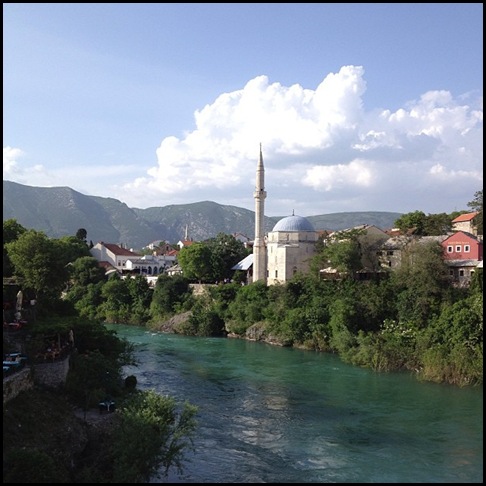 This is Koski-Mehmed Pasha's Mosque or Karadjoz-bey in Bosnian. It was severely damaged in the second world war and almost completely destroyed in the Bosnian War. It took me a few days to go from admiring all of the newly built minarets in Mostar to realising why they all had to be rebuilt and it was truly chilling. 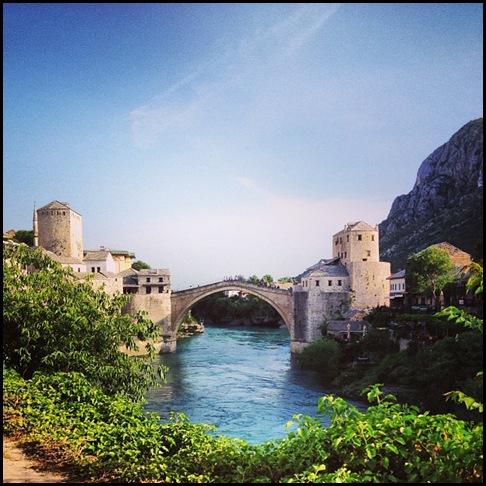 I took one or two photos of Stari Most during our time in Mostar. The name “Mostar” actually derives from the medieval gatekeepers who guarded the bridge. Most = bridge. 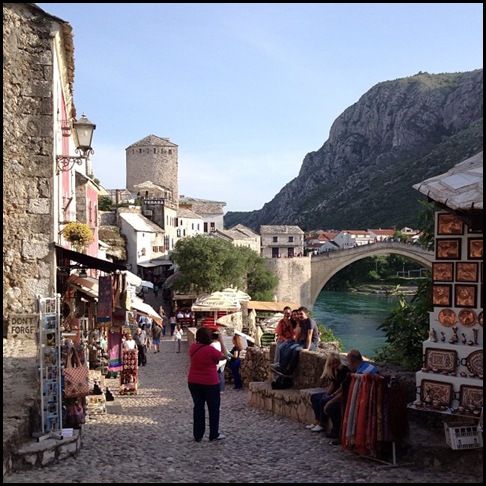 What I loved most about Mostar (apart from the food and the bridge and the people) was the Ottoman feel. It felt like walking through a medieval bazaar with traders peddling luxurious fabrics, priceless trinkets and wares from all over the world.

If you look very carefully on the left hand side, you will see the tiny “don’t forget” sign. That is to remind us that we should never forget the horrors of the war. 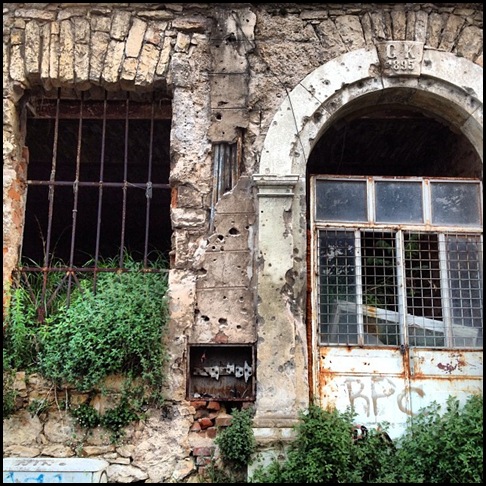 Despite all of the rebuilding in Mostar, there were many, many scars. Many buildings were still cordoned off and had been shelled beyond all repair. 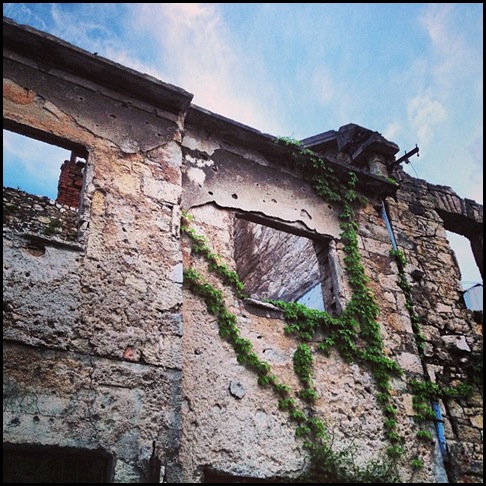 It was another chilling moment when I realised that for all the times I adored ruined castles and championed urban exploration in abandoned buildings, there was nothing fun or exciting or good about any of these. This destruction was manmade and entirely intentional. 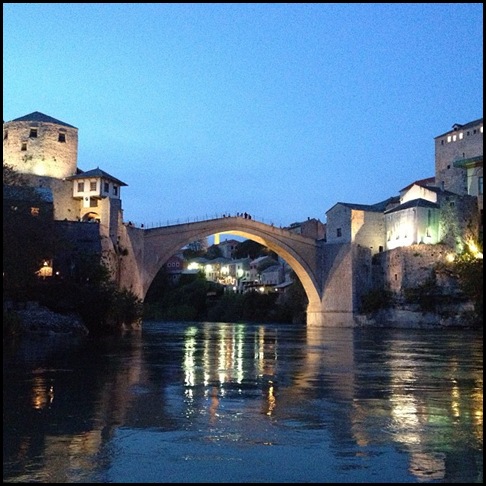 This is an iPhone version of the photo of Stari Most that you have already seen on the blog. I was going to not include it but couldn’t bring myself to do so. 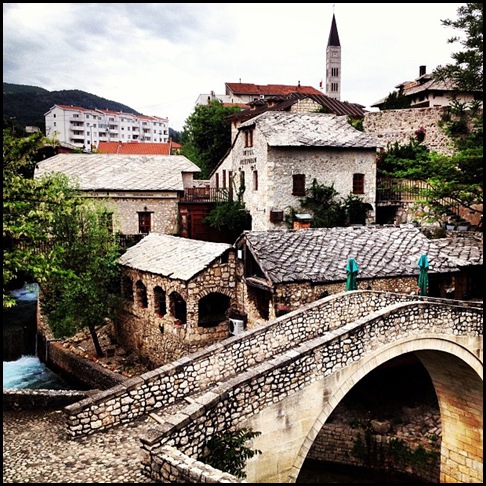 Mostar doesn’t only have one bridge. This is the beautiful Kriva Cuprija or Crooked Bridge. It is really beautiful and the coolness of the water flowing below was such a relief in the hot temperatures. 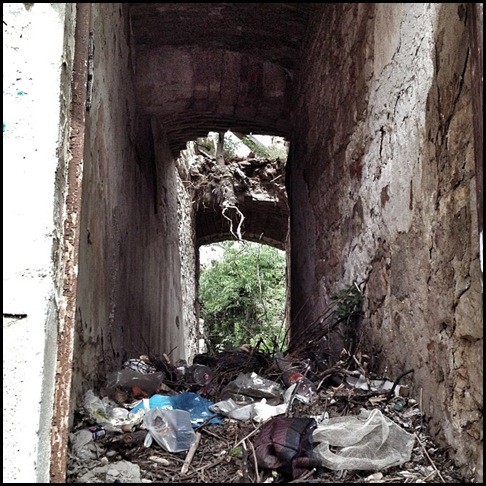 On our last morning in Mostar, we took a very long walk on the eastern side of Mostar, the side mostly inhabited by Bosniaks. Mostar is still very much a divided town and the eastern side bears far more scars and fewer hotels and bed and breakfasts. It was disturbing and unsettling, to say the least. The 17th century Old Clock Tower still looms over this part of the city but on inspection, you can see that it is but a shell. The inside of this magnificent building has been destroyed.

I adored Mostar and am counting the days until I can return. I don’t think it will be long as we’re already planning a trip to Montenegro or Macedonia via Bosnia next year. Sometimes I need to leave a place before I realise how much I want to return but I knew I loved Mostar the minute I first saw it.

Have you been to Mostar or Bosnia? Did you fall in love too?