Confronting My Fear of Heights at Orlando Towers 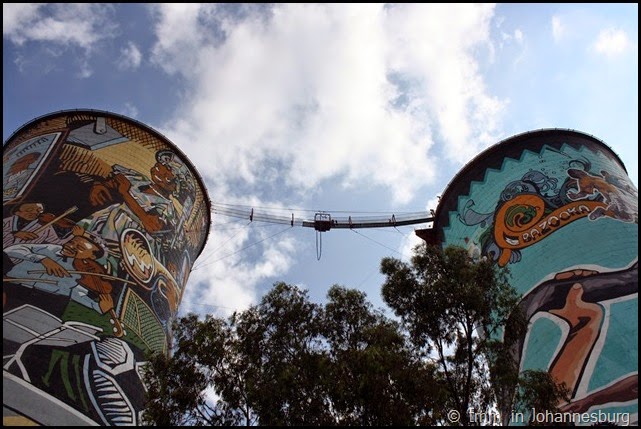 Sometimes fear creeps up on you. Nothing specific happened to make me afraid of heights but all of a sudden it was there.

I first noticed it when Stephen jumped off the highest commercial bungee jump in the world at Bloukrans Bridge, in the Western Cape in 2003. The jump takes place from a platform under the arch of the bridge and the surface of the platform is made from some sort of chicken wire or other holey metal. I could see straight through it to the valley below and I practically crawled to the centre of the platform, holding on desperately to the sides. Out of the blue I was acutely aware that I was terrified of heights, in a most physical and immediate way. This was not helped in any way when Stephen bungeed off the bridge and promptly disappeared behind the perspective of the rope. I honestly thought I’d lost him for a moment!

When my fear of heights overcomes me, my whole world tilts sideways; I become dizzy and I can't think straight.  I don't mean to be contrary but no, Sartre, it has nothing to do with wanting to jump and knowing I have the freedom to do so. Psychologically I'm not afraid but the rapid heartbeat and inability to breathe make my brain think I'm afraid.

The fear continued to grow once I moved to the UK. We had an open flat roof at my previous office and showing contractors around was a challenge in itself as I couldn't go near the edges. My first time in the London Eye was okay, just as long as I didn't look down because when I did, it felt as if the capsule had tilted on its axis.

What would you do if you had a dire fear of heights?

Well, I jumped free fall off a 100 metre high tower. That’s right, take another look at the photo at the top of this post because I jumped off that! See – that tiny dot in the photo below is me. 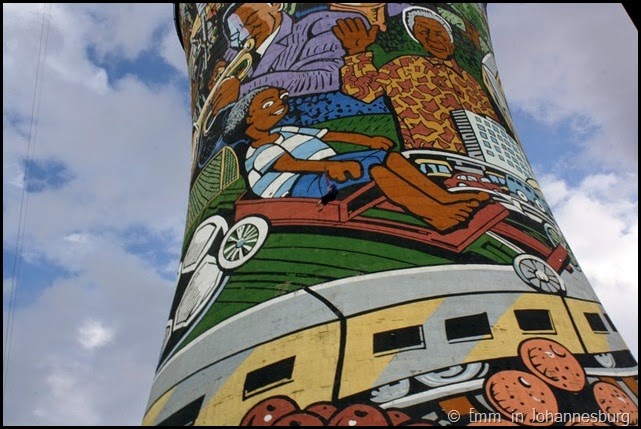 If you’re thinking I’m crazy right now and possibly a little reckless, then it is probably best that I explain just how right you might be. See, I had always loved the look of the Orlando Towers near Soweto in Johannesburg but there was no way on this earth that I was going to bungee jump from the towers or base jump into them. No, that was just too dangerous.

But then I visited the Orlando Towers website and noticed that you can power swing from the towers! Marvellous, I thought, I’ll do that!

I was also convinced that ‘power swing’ meant foofy slide or what you might know as a zip-line or flying fox.

In other words, I was thoroughly convinced that I was going to take a rather tame and safe slide down the sides of the Orlando Towers and I remained under that delusion until after I had paid my R360 over to the nice lady and signed an indemnity acknowledging that I could very possibly jump to my death that day.

So what happened next? 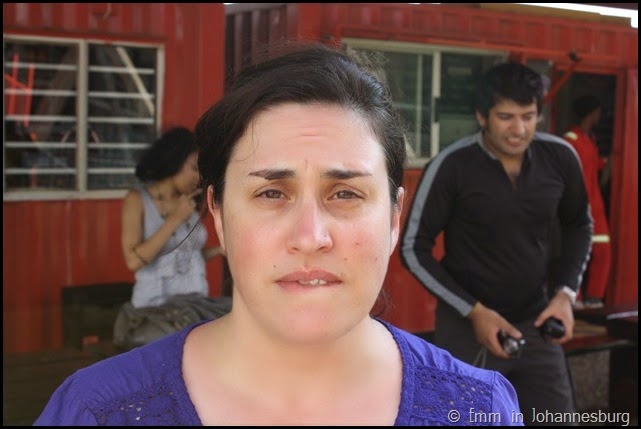 I began to look very, very worried. Please excuse the photo, I’m evidently not one of those people who manages to look glamorous as I walk to my death when travelling. You’ll notice that the man behind me was looking equally nervous as he pulled on his bungee harness. 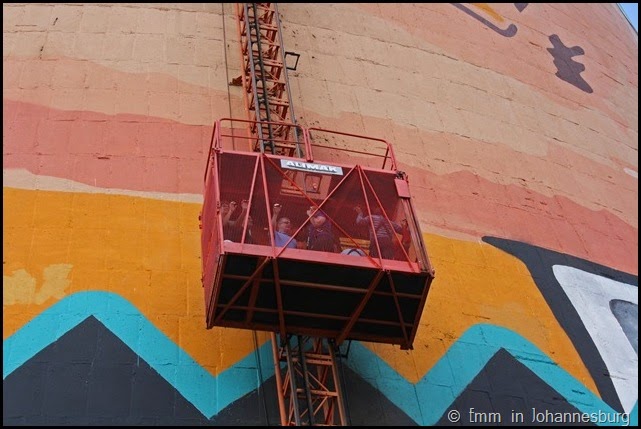 We then clamoured into a lift that took the most torturously slow ride up the eastern tower. 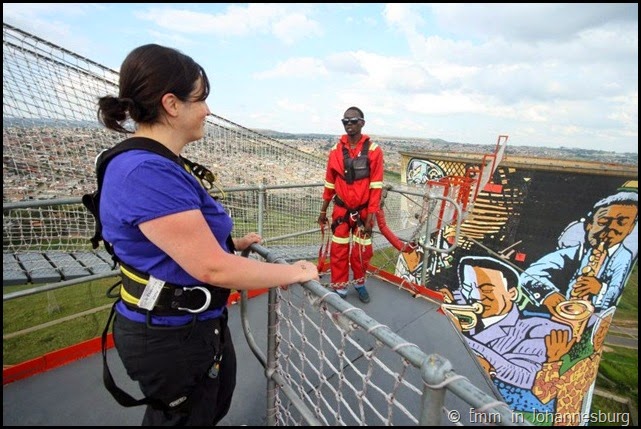 I took a moment at the top to admire the views. It felt like you could see forever from on top of those towers and it was simply fabulous. I also graciously let several people go before me, good mannered person that I am.

This photo was taken at about the moment when I realised that unlike the bungee jumpers who are fitted with a massive attachment to the bottom of their legs as well as a harness, I was simply going to be fitted with a single rope attached by two clips to my harness. 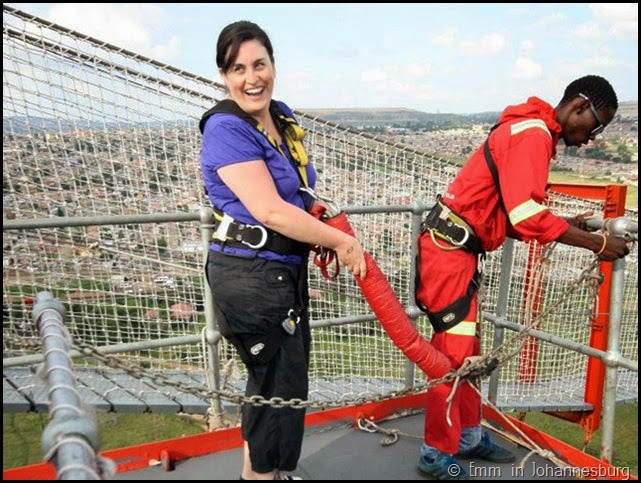 There was a rather tense moment when I kind of refused to step towards the edge of the platform and was politely reminded that if I turned back now, I would lose all my money. That didn’t work and so my chief torturer pictured above politely told me to “get your sh*t together”. Oh yes he did!

I don’t actually remember jumping off. As far as I can remember, I crouched down and dangled one foot in the air and then sort of fell forward.

And then I fell and fell and fell with my eyes squeezed shut for I had signed up to a free fall from a 100 metre tower, the kind of free fall that only becomes a swing once the very, very long rope gains traction from a point suspended between the two towers. And so as I continued to fall, I forced myself to hold on to the rope, to open my eyes and to enjoy myself. I wouldn’t go so far as saying it was exhilarating. Mostly, I was trying not to wet my pants, but once I got down to the bottom all I wanted was to go right back up to the top and try it again! 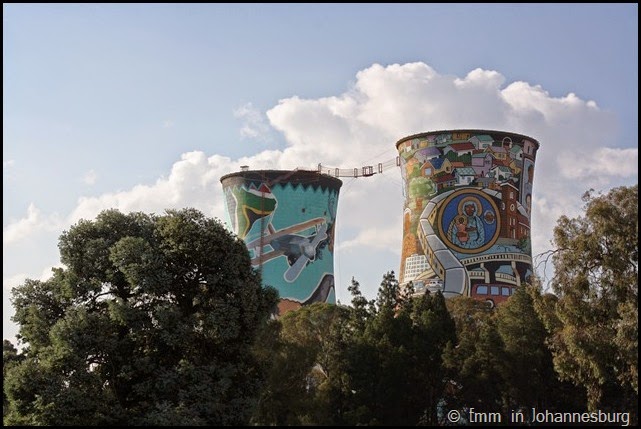 Would I do it again? Yes. I would definitely like to give it another try and to try not to be so terrified this time because I really was that scared.

Did it cure me of my fear of heights? Sort of. It gave me the chance to replace my fears with memories of an exhilarating, exciting and triumphant experience. Of course, it doesn’t always work. I went on the London Eye the other day and purposefully looked straight down and had to sit down for a couple of minutes to compose myself!

Have you ever done anything completely crazy but been too silly or shy or stubborn to turn back?