Exploring Kent: A Walk Along the Cray Riverway 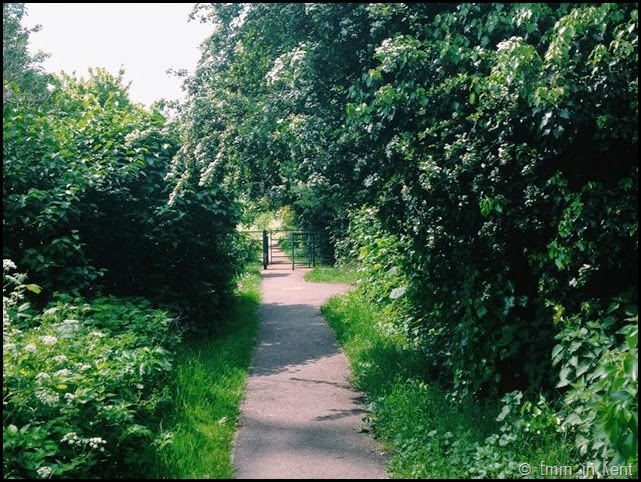 Earlier today, I posted some photos of the beautiful Kent countryside only for Stephen to protest rather loudly that I was deceiving my audience. As I looked at him in shock, he exclaimed that he happens to know the area in question because he walks home that way when he drops his car off for its service. “What have you done to all the rubbish?”, he asked.

Well, I’d love to tell you that the Cray Riverway has been magically cleaned up recently and that I didn’t see any plastic bags, beer bottles or underwear lying along the path but that would be deceptive.It’s just that I chose not to photograph it. 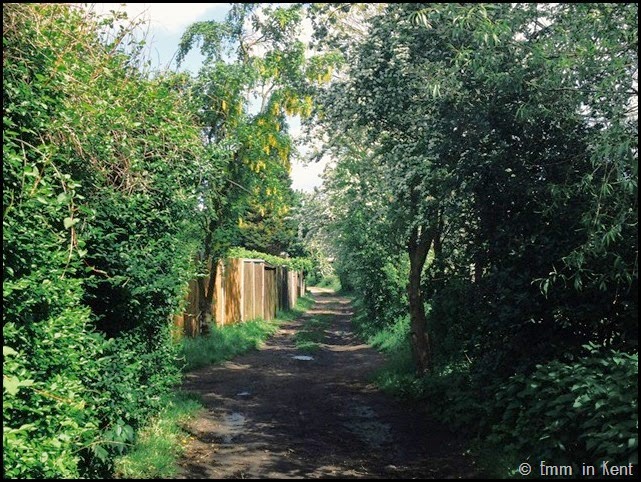 I will tell you what I saw though. Yesterday I had a couple of things to do in Dartford and Crayford but rather than struggle with parking, I decided to walk from Dartford to Crayford and then back home again along the Cray Riverway. As I entered the path by Cray Gardens, I immediately began to question the soundness of my decision. There before me stood a well-dressed, middle-aged man drinking a Carling lager who was clearly not having a good day. He had the deepest bags under his eyes and he looked like he hadn’t slept in weeks.

I quickened my pace and walked past him, relieved that he chose to return the favour and leave me alone. I soon emerged onto a path that lead me around the backs of the houses lining Crayford Way. Two girls approached me and I quickly shoved my phone into my pocket. As I walked past them, one was clearly agitated, shouting into her phone while her friend nodded in agreement that she was going to throw some unnamed nemesis under a train. Yes, really. 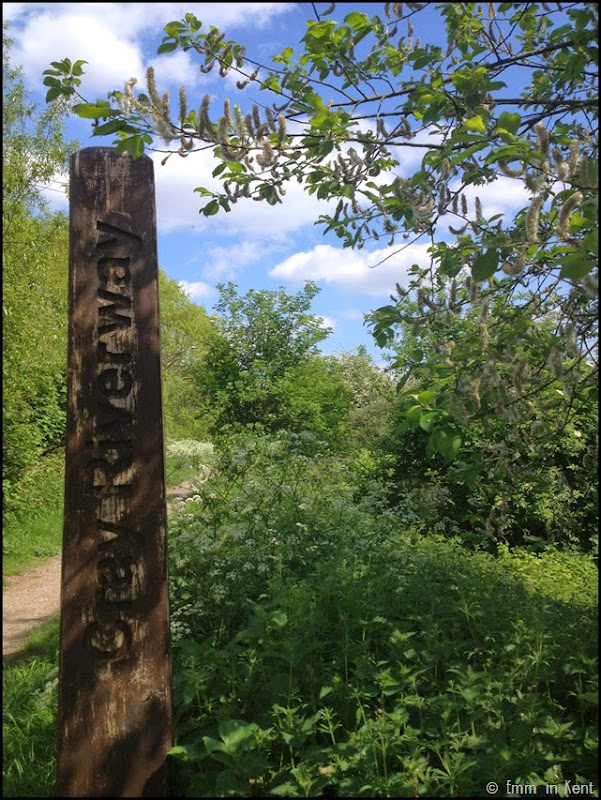 I emerged onto Barnes Cray Road and then quickly entered the path again on Maiden Lane. This part of the walk really was quite idyllic. As I walked along, there was a couple who walked by me, holding hands. The river is really quite full in this area and I could see that it was still stretching up into the gardens of the riverside properties. They must have been flooded during the January floods. 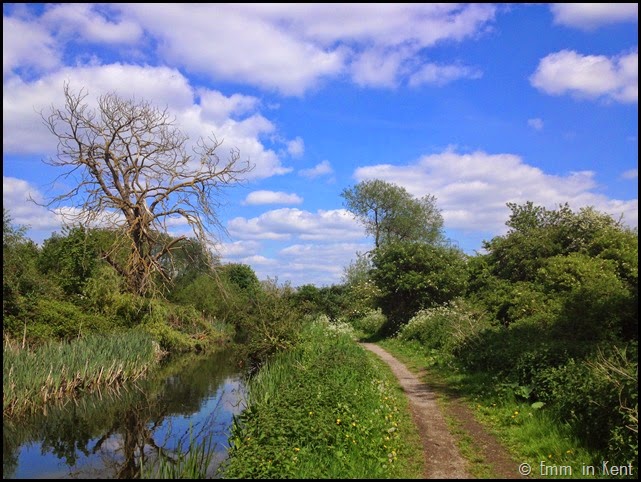 It was this photo that made it all worth it. I’m determined to explore the Kentish countryside around my house. England is a strange country and no matter where you live, you are always a stone’s throw from areas that are a little rough, from neighbourhoods where residents litter and where teenagers are a little scary. But for every person that is having a bad day, there are many more people working to clean up this area of Kent such as my friend Richey who runs Dartford Litterpickers.

What I choose to photograph and choose to remember is that you don't have to wait long for a perfect day when you live in Kent, the Garden of England. 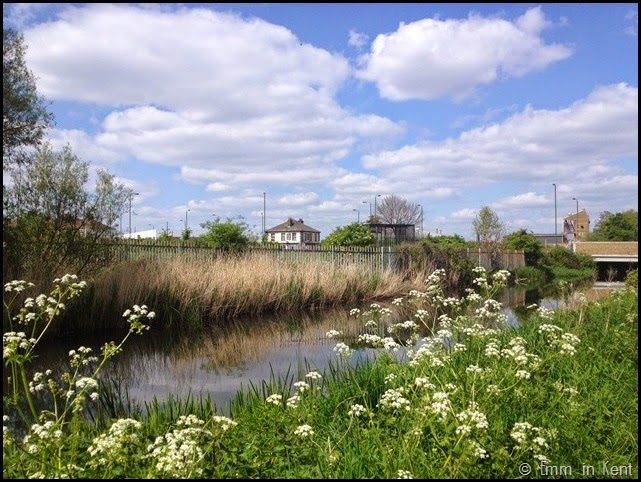 Now back to reality. This is the Jolly Farmers pub which sits on the most eastern boundary of London between Crayford (in Greater London) and Dartford (in Kent). It is known as the worst pub in London although I've not been brave enough to test that reputation. It is notorious for a shooting in 2005 which is kind of scary given that I live within walking distance of it! 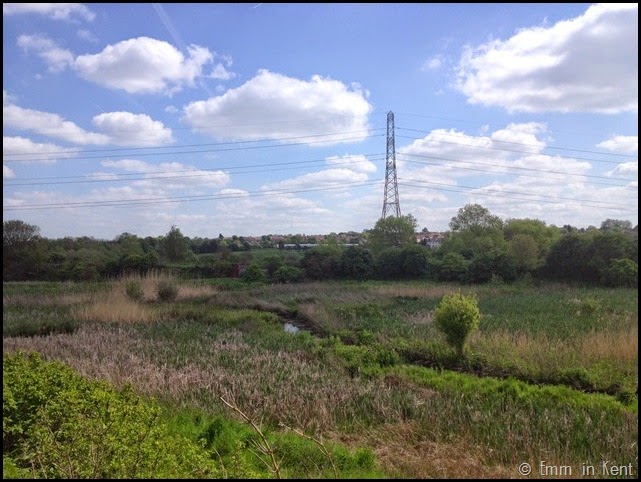 I soon emerged onto Thames Road and followed it around into the very north western tip of Dartford. There are a lot of rolling fields along the road but from what I can see, they are private property. 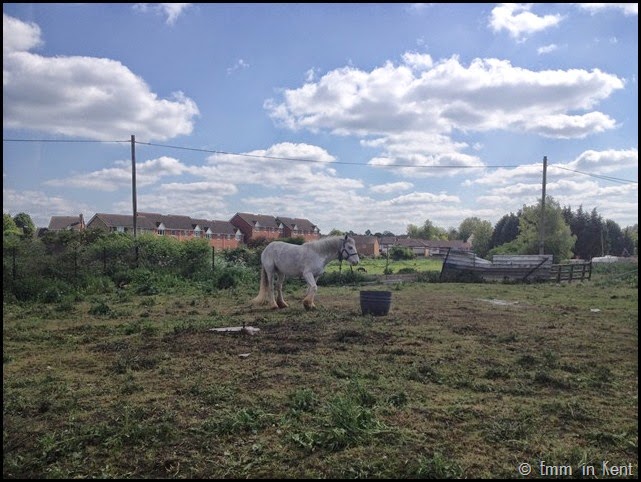 There are a lot of horses in this area. Some of them appear to be wild but this one was bridled. He seemed very interested in me as I took photos of him and even strutted to the left and right for me. He was very friendly and knowing absolutely nothing about horses, I wondered if he was lonely. Stephen is terrified of the horses across the road on the Crayford marshes. He says that they are travellers’ horses and that they have been bred to be aggressive. I think that is absolute rubbish but I think a fear of horses is like a fear of any animals, you will never get over it until you grow to know them.

All to soon I was home again and felt great after a 3 mile walk. It can be quite gritty and urban near where I live and it certainly isn’t as picturesque as some areas of Kent but I was pleased for the adventure and the chance to be outdoors on such a beautiful day.

What is your neighbourhood like? Do you have access to the countryside and if so, how well kept is it?