Vintage and Retro at the Isle of Wight Bus Museum 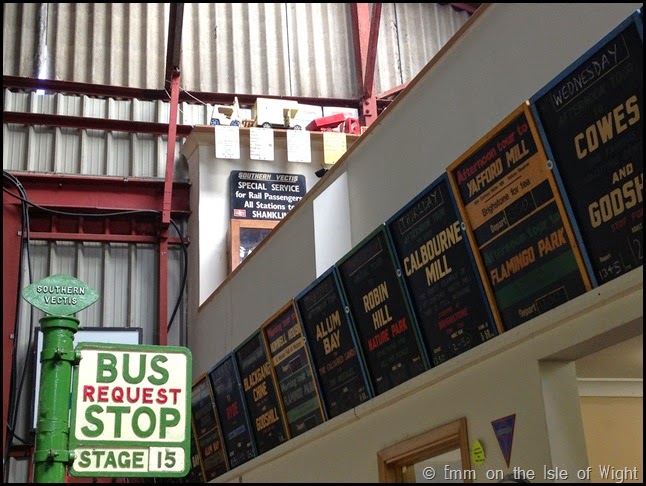 My biggest regret when I visited the Isle of Wight in March 2010 was that we were not able to visit the Bus Museum. The museum is only open in the summer months and we had visited the island a mere two weeks before the start of the summer season. I mentioned this to Melissa when we visited last year and was thrilled when she was as keen as I to see the museum.

As you know, I adore vintage cars and trucks but my particular love for classic buses began when I discovered Oompus the omnibus in the Ladybird Classic Tootles the Taxi and Other Rhymes.

So now that I’ve painted a picture of my state of childlike glee upon entering the museum, I can confirm that disaster soon struck. My camera ran out of battery! I can tell you now, there is no more pitiful a spectacle than a blogger who has run out of battery. Well, I put on a brave face and thanked my lucky stars that I had my iPhone handy.

Now if you’re all safely in your seats, let’s begin our tour of the museum… 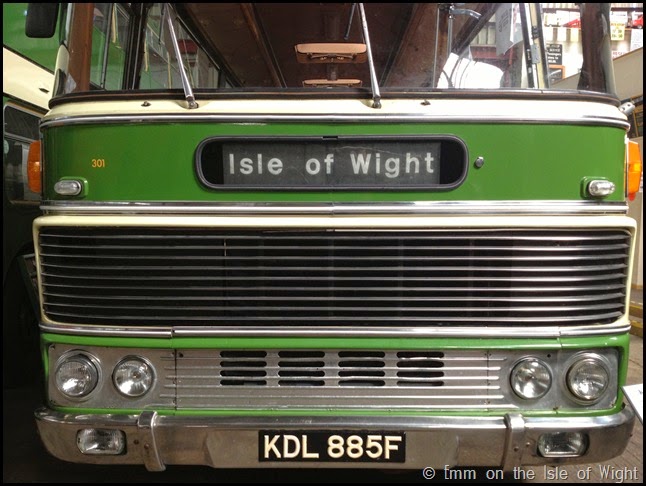 How retro is that? I love the horizontal lines of the grill. 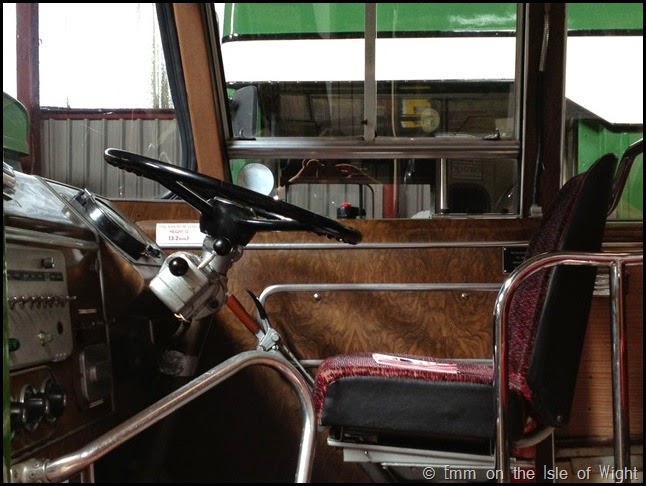 This view makes me so nostalgic. This would have been the first thing we noticed upon entering hundreds of buses. The seat doesn’t look very comfortable though! 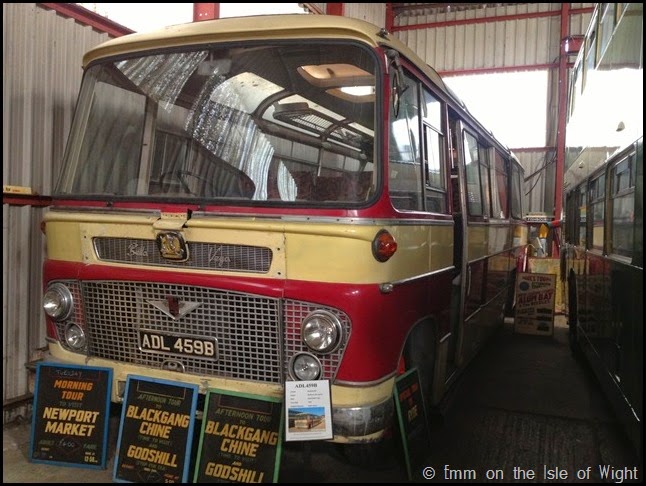 The Isle of Wight was a very popular holiday destination for scores of English tourists every summer and once they'd reached the island by rail or ferry, buses were the primary method of getting around. The various bus routes would take visitors to well known beaches and other attractions and buses are very much part of the island's heritage. 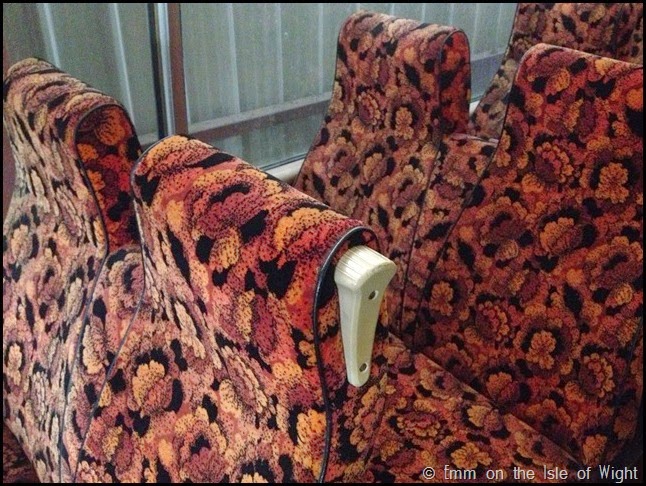 Somewhere along the way I have definitely grown up because I find the pattern of this material positively gorgeous in a retro, 60s way. Thirty years ago I might have refused to sit on it and would have found it unforgivably old fashioned. 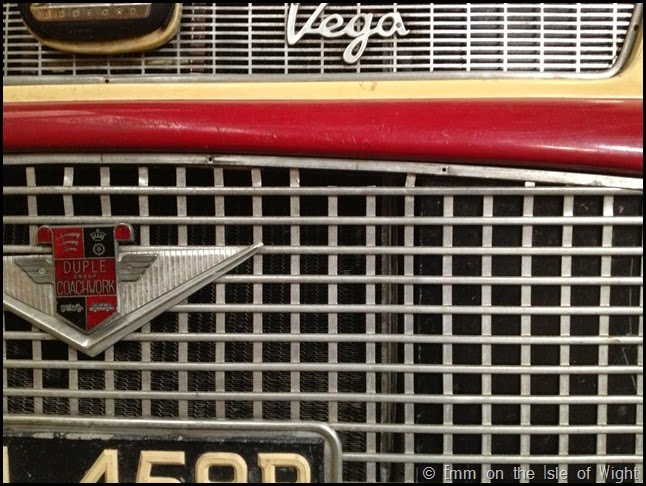 I was fascinated by the intricate designs of the buses, especially in the front grills. Don’t get me wrong, I love modernity (post-modernity?) and modern design but I do think recent designs lack the elegance of the last century. 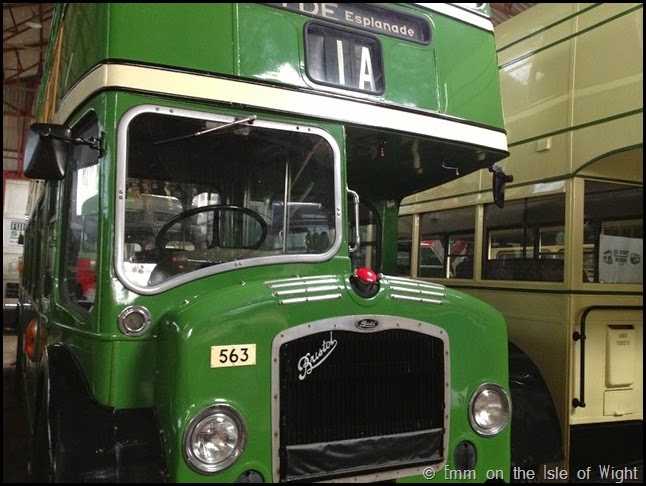 This is a proper old omnibus from 1959. Oh, can you imagine how many island summers this traveller has seen? 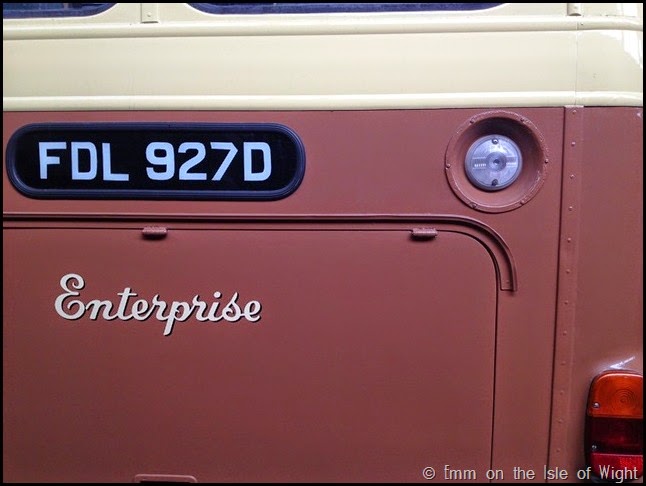 Only in the 1960s could we have thought that salmon / brown was an appropriate colour for a bus. Come to think of it, I'm sure I remember salmon coloured linoleum in one of our kitchens. 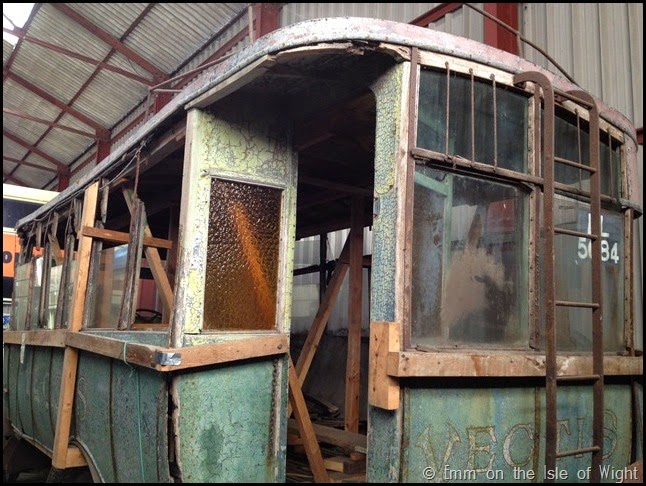 This was one of my favourite exhibits, tucked away at the back of the garage. I guess this vehicle is just too old and too damaged to restore and it is quite a reminder of the work that has gone into restoring the buses in the museum. You can see the state of the engine below. Part of me hopes that someone does take this restoration project on board but another part of me likes to see it in its original form. 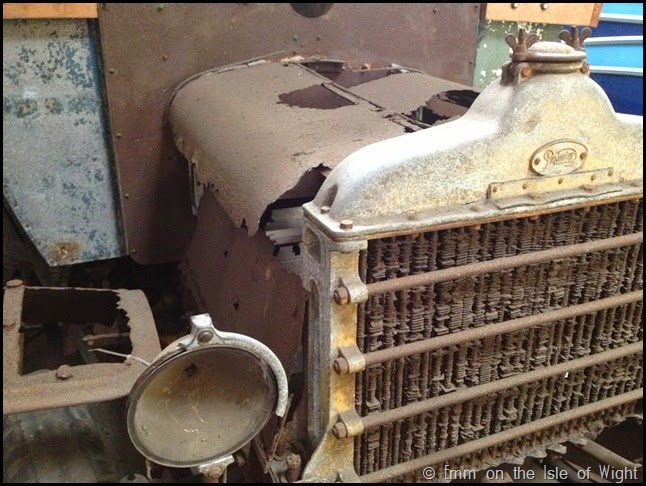 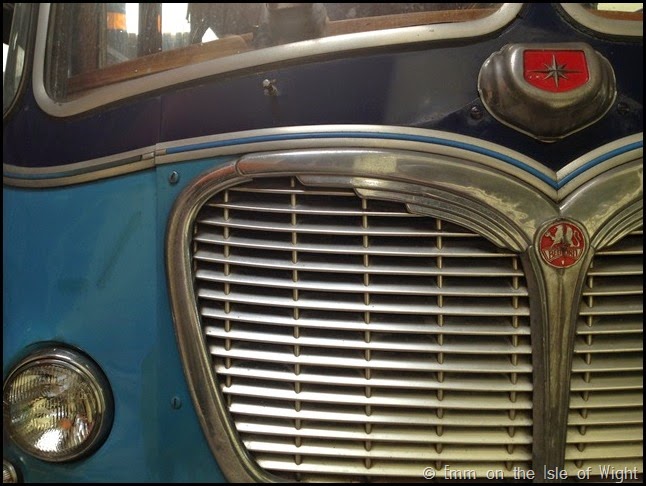 You may have noticed that most of the buses here are Bedford buses. Bedford was a subsidiary of Vauxhall Motors and was founded in 1930. They made everything from trucks and buses to ambulances and army vehicles and were sold right around the world. The Bedford brand went defunct in 1986 but their spirit lives on in many Vauxhall and Opel designs.

My first two cars were Opel Corsas and my first car was in a similar shade of turquoise blue to this Bedford bus. The only time she ever broke down on me was on that first day home from the dealer when I hadn’t quite figured out how to put petrol in her yet. 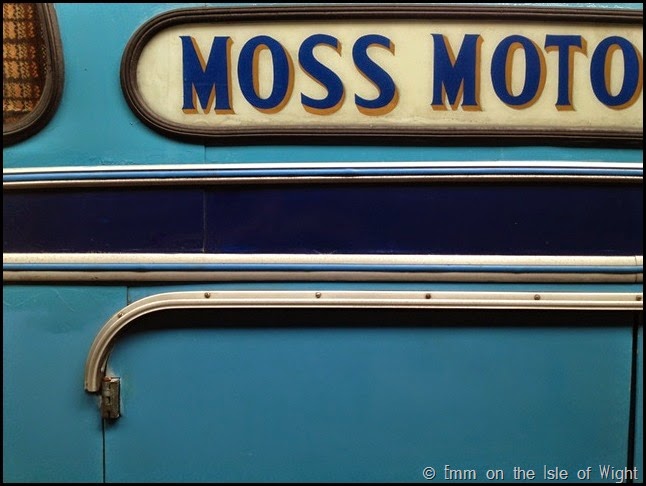 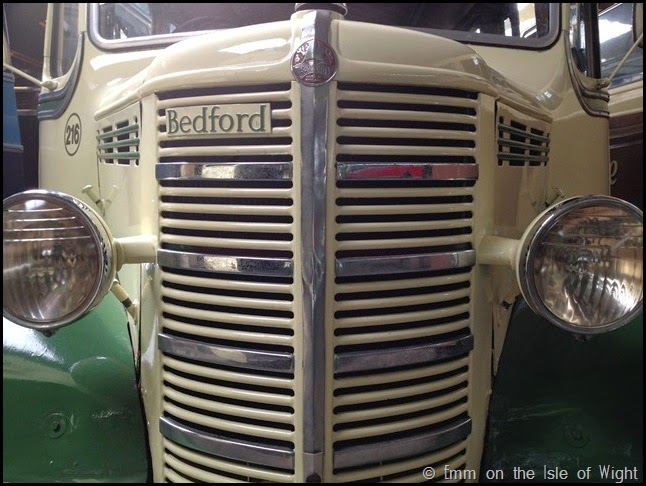 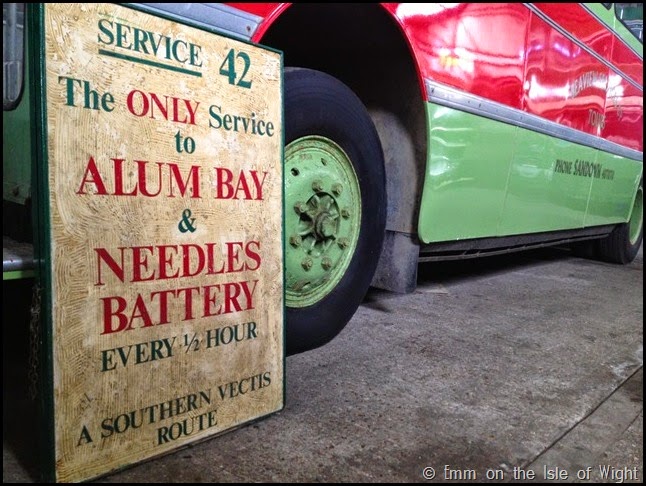 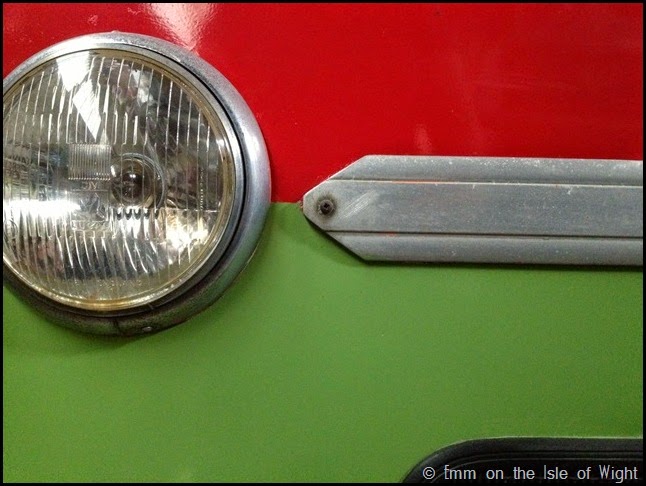 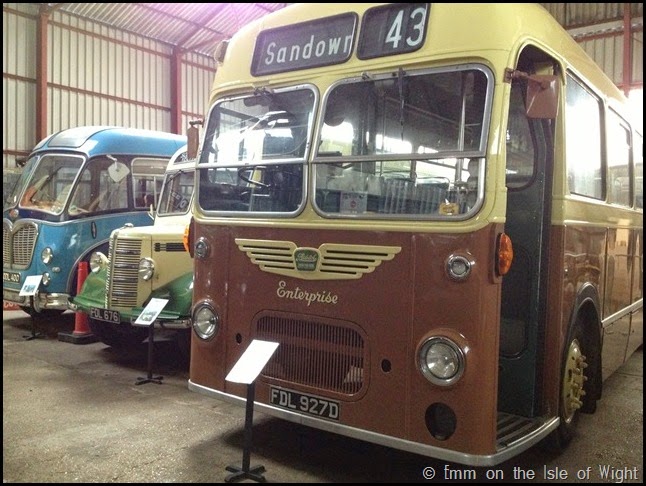 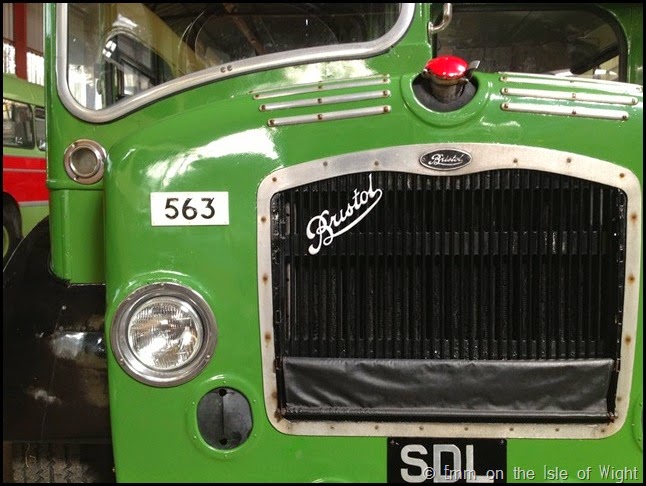 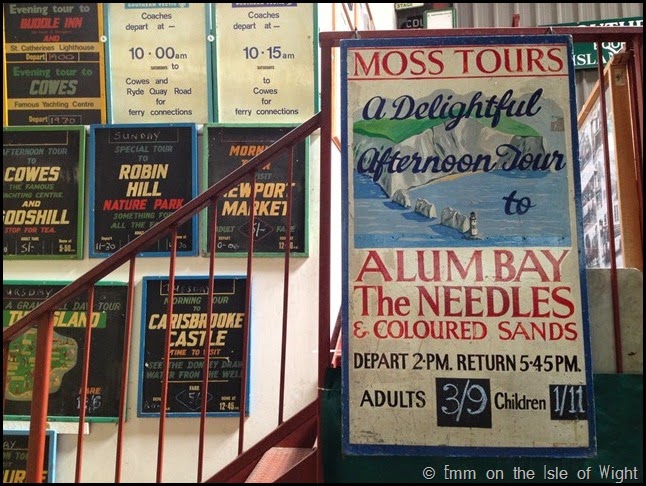 I was really impressed by the Isle of Wight Bus Museum and would absolutely recommend a visit if you are ever on the island. Both children and adults are encouraged to climb into the buses and explore them and you are also more than welcome to move props around to ensure the best photographic opportunities. We felt really relaxed during our visit and felt welcome to take our time. Definitely stop by the gift shop on your way out! I bought a gorgeous omnibus model that now has pride of place in my display cabinet.