There is nothing so beautiful or insightful as a simple doorway, window or façade; they are the eyes of a city, providing us with a glimpse of the life and soul behind them.

Verona was the second city that we visited during our trip to Italy and although I loved Milan, it was nice to escape the hectic capital city for the quieter, more relaxed City of Love.

On our first afternoon, we took a long walk around and through the city and I simply couldn’t resist taking photo after photo of the beautiful façade, doors and windows. It was a great experience because I remember why each scene caught my eye and I made sure to compose each photo carefully, but it was rewarding to put all the photos together in the end and see how they came together as a collection. 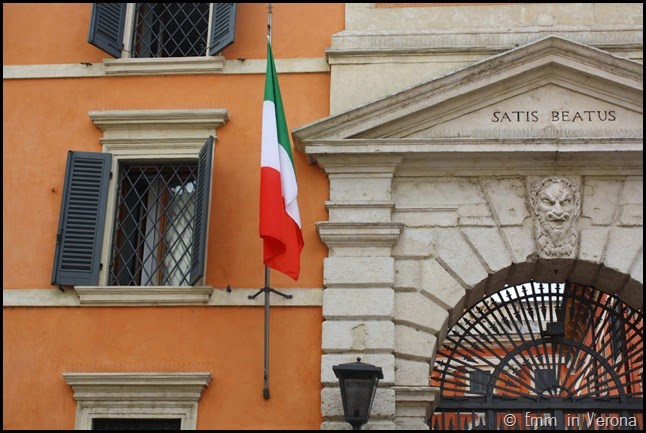 The keystone of the 18th century Palazzo Carli reads satis beatus which translates as ‘sufficiently happy’. That wasn’t what caught my eye though, in the photo above, I loved the way the Italian flag contrasted with the burnt orange plaster of the building. This building was once the home to the Hapsburg ruler and is now NATO headquarters. 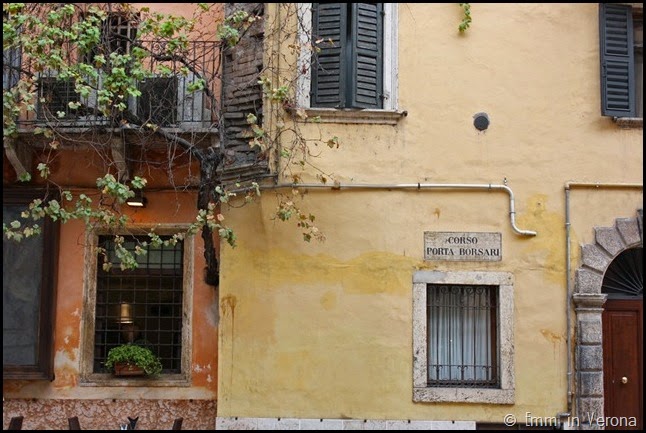 For me, this scene taken on the Corso Porta Borsari was so quintessentially Italian. I love the greenery flowing down from the balcony, the green-shuttered windows and the various states of disrepair of the paint and plaster. I love to compare street signs and direction posts in the cities that I visit. 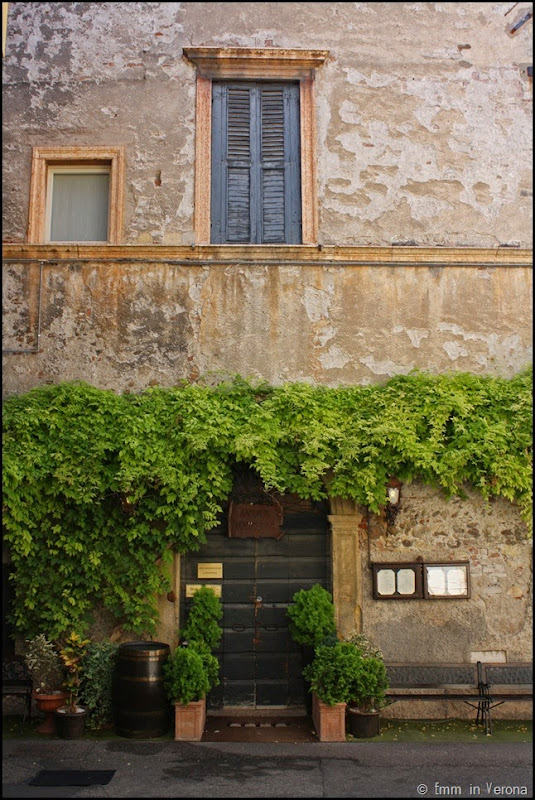 This is the doorway of the Ristorante Antica Torretta on the Piazza Broilo. I was very pleased with how this photo turned out and was glad that I decided to take it in portrait mode. To me this doorway looks so inviting with its leafy awning and I would certainly have wanted to go inside if the restaurant were open. 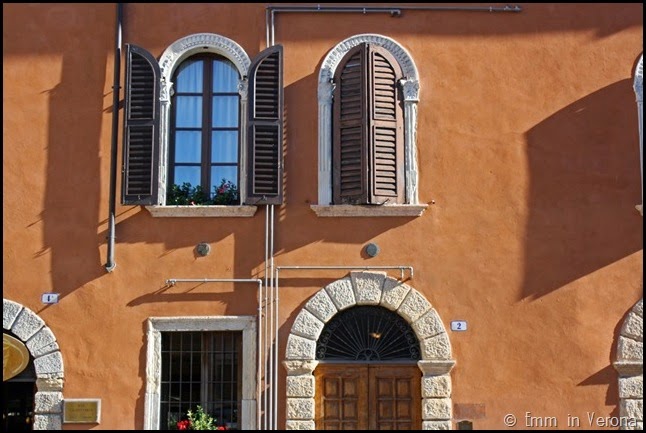 It wasn’t too late in the afternoon but the shadows were already beginning to lengthen. It was the house numbers that caught my eye in the scene above. I love it when I’m able to capture a perfectly framed façade… 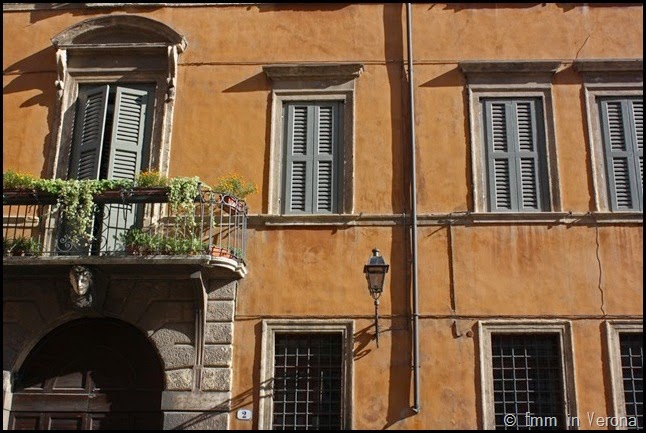 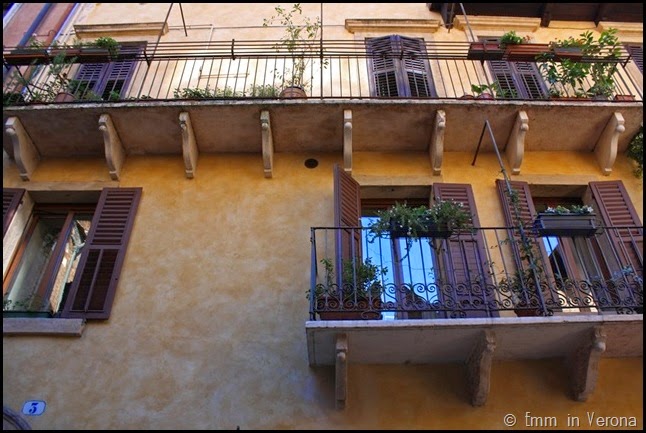 … or even very elevated indeed. Despite not getting the perfect photos that I wanted, I decided to keep these photos because this is what I remember of the houses in Verona – the ornate steel work of the balconies, the shutters and the plants. I have always said that I will jump at any chance to live and work in another city and I like to imagine that I could live in the inner cities of Boulogne, Verona or Lille. 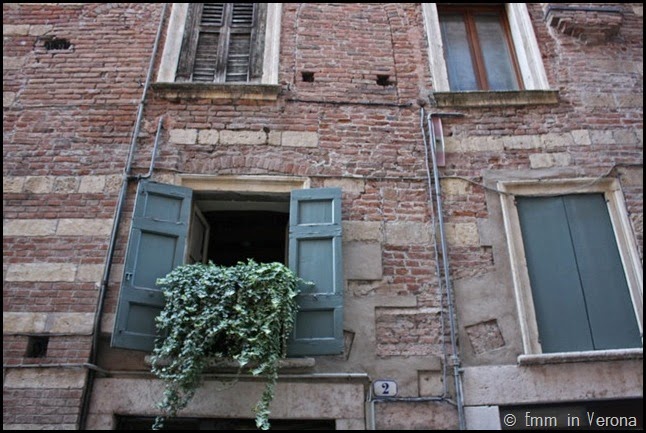 It looks plain, doesn't it? Well this is part of the façade of the Casa di Cagnolo Nogarola detto Romeo, the home of the entirely fictional character Romeo, of Romeo and Juliet. The character might be a fiction but this house was in fact the seat of the powerful noble Montecchi family and so the house is a fitting location to complete the myth of the star-crossed Veronese lovers. 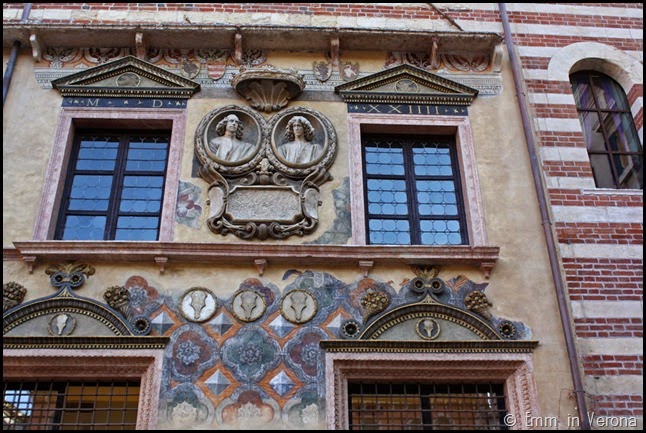 This is just a small detail of the Palazzo della Ragione in the Piazza dei Signori. Construction of this destinctive building completed in 1196 and it was the frescoes and tile work on the façade that caught my eye. It is heart breaking when you see the remains of fresco work on these buildings. The buildings were once covered with them to a great extent but they faded, crumbled or were painted over as Verona’s fortunes changed over the centuries. You’ll often see parts of a fresco under an arch or somewhere that doesn’t catch direct sunlight.

The building has had many uses over the year but it is now home to the Gallery of Modern Art Achille Forti. 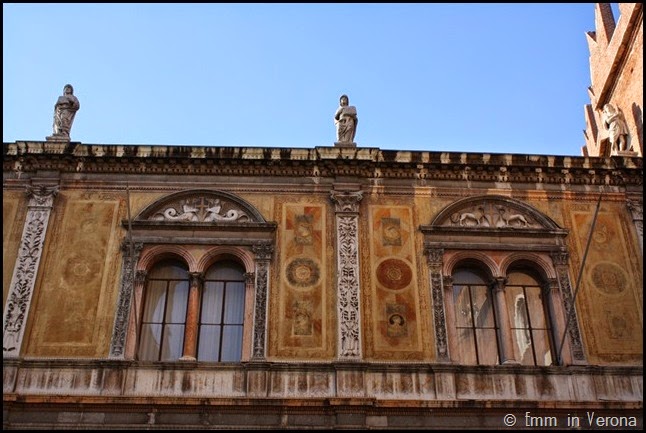 The Loggia del Consiglio in the Piazza dei Signori is not an easy building to capture. I specifically wanted to capture the details of the 15th century town hall, but to do so meant to elevate the angle once again. If you’d like to see the detail of the full building, I’ve uploaded it on Google +. 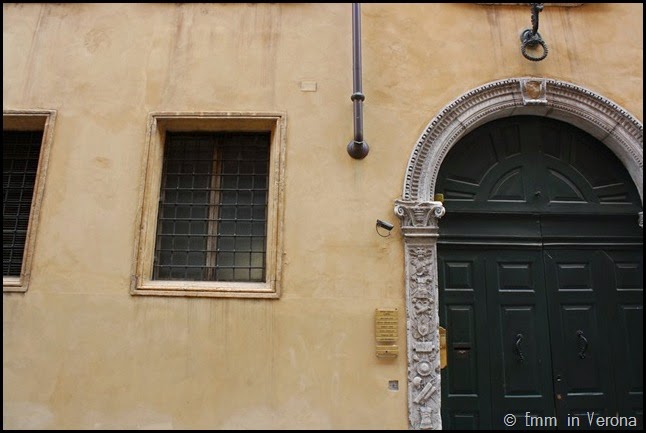 It took several attempts before I decided on this photo and even then, it wasn’t perfect. I wanted to capture the plainness and simplicity of the façade while still capturing it’s unique Veronese charm. I think it might have worked slightly better if I was taller! 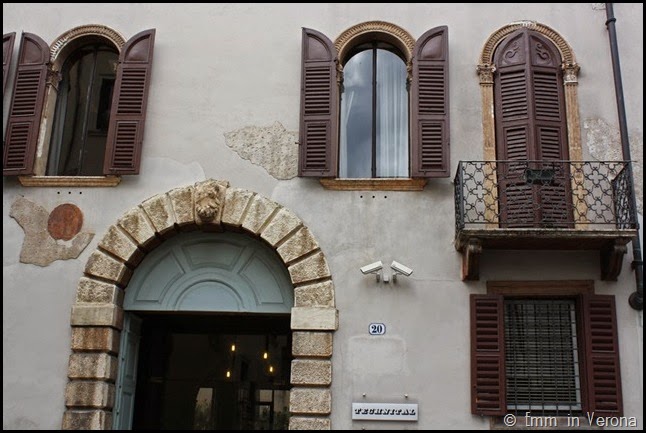 This is the façade of the old Palazzo Cossali on Via Carlo Cattaneo. Again, the building was once covered by frescoes but these were lost in the first half of the 19th century. The building is now home to engineering firm Technital who have established that the building is structurally very true to its original form, except for the doorway above which was a 19th century addition. 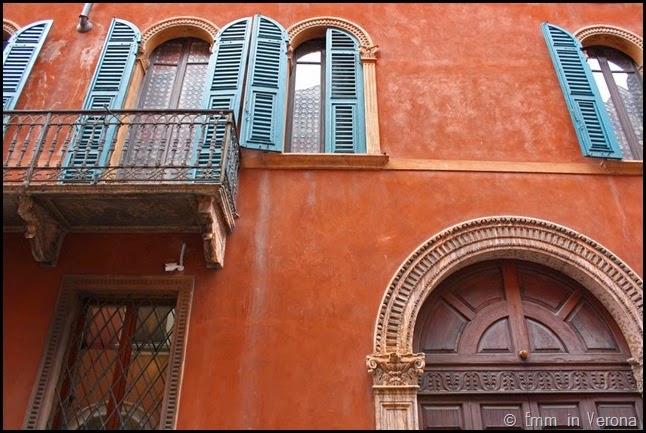 And one final photo.  This one was taken on Via Roma, really close to the location of Palazzo Carli in the first photo. I love the weathered wooden door with its ornate carvings, the burnt orange plaster and the steelwork on the balcony and the first floor windows.

What do you most like to see in a foreign city? What types of things catch your eye and make your travel partners sigh with exasperation as you capture yet another example of that something unique and quintessential?