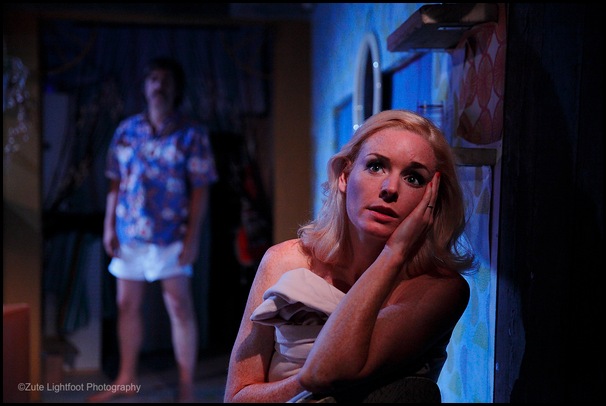 California. The land of surfing, oranges and the great American dream. Dolores and Hank are married, happily perhaps or so they think. Hank was great once, a renowned surfer with a monkey on his back, literally speaking of course. Dolores was happy to be by his side, to look after his monkey when Hank went on to travel the country in search of the next great sale. Until the day that she wasn’t. Until the day that the monkey died and Dolores discovered that she has a unique talent.

When the tables are turned, Hank is happy to be by Dolores’s side, to look after their Macedonian curly tailed pig while Dolores exercises her gift. Until one day when he isn’t. Until the day that it all comes tumbling down and Hank realises that his best days are behind him.

Directed by Hannah Price, The Dead Monkey is bleakly comic and very dark. It lures the audience in with a promise of humour and satire before savagely delivering its message. Written by Nick Darke in 1986 and originally performed by the RSC, The Dead Monkey is a tale of desperation and creeping violence in a grimy American marriage that is as relevant today as it was almost 30 years ago.

The Dead Monkey is expertly performed by a three-person cast consisting of James Lance as Hank, Ruth Gibson as Dolores and Charles Reston as the vet. With all the action taking place on the intimate Park 90 stage, the cast grips you from the very first scene and takes you on a rollercoaster ride of love and duplicity, desperation and euphoric recall.

I was especially impressed with the set design and costumes in the play. For a moment there, it really felt like we were in a beachside shack in California which made the final scenes ever more powerful. All three actors underwent incredible transformations in their appearance for their roles with Gibson chopping off her long red locks and dying them platinum blonde and James and Charles adopting a moustachioed, early 1980s look that was startling in its authenticity (or is it just me that finds that particular period of fashion unsettling?)

I thoroughly enjoyed The Dead Monkey and would highly recommend it. 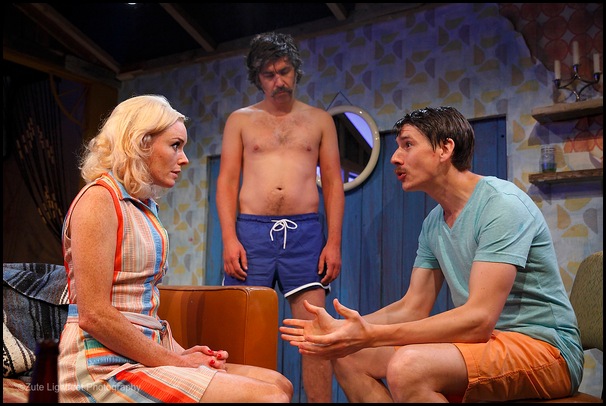 This is the second time that I’ve seen a play at The Park Theatre in Finsbury Park and I have to say that I really like it. The theatre is in a great location and is situated right outside Finsbury Park tube station. There are also loads of great restaurants in the vicinity and I’d especially recommend Pasta Remoli and My Cottage Cafe Lebanese Restaurant on Clifton Terrace. I certainly hope to see more performances here in future.

Presented by London theatre company Mongrel Thumb, The Dead Monkey is showing at Park Theatre in Finsbury Park until 4 July 2015. Prices start from £18 each with £12.50 Tuesdays and Pay What You Can matinees. Book online at Park Theatre or by telephone on 020 7870 6876.