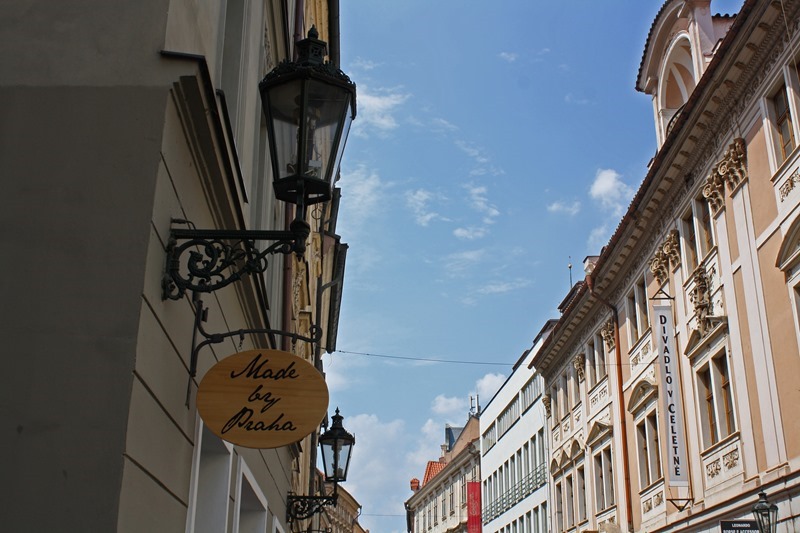 How do you show your love for a city? You can photograph it from every angle, dine along its rivers and tell the world of your love affair. Or you can just walk through its streets and breath it in. When we visited Prague we did just that, we walked wherever we could, taking in the streets and alleyways, parks and suburbs, famous sights and hidden treasures.  It was a wonderful five days that left me with a thirst for more and a definite plan to visit this fantastic city again.

Despite soaring temperatures and barely a shadow in sight, we decided to walk from our hotel in Vinohrady to the Old Town on our first day. On paper it appeared to be about a mile but somehow we managed to walk seven miles on that first day.

Rather than draw you a map of the rather haphazard route that we took, I thought I’d share our journey with you and the sights that we saw. 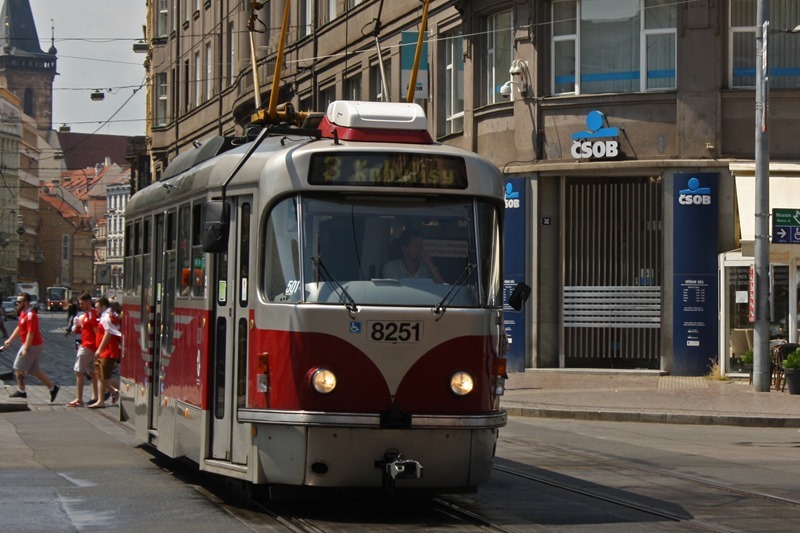 It always takes me a little while to get a feel for a city. What are the people like? Are they friendly? How modern is the city? What is quaint and what is innovative? The first thing I spotted on our walk was the tram – poor Stephen doesn’t quite understand my obsession with public transport but needless to say, having never lived in a city with an active tram service, I was transfixed by the trams. 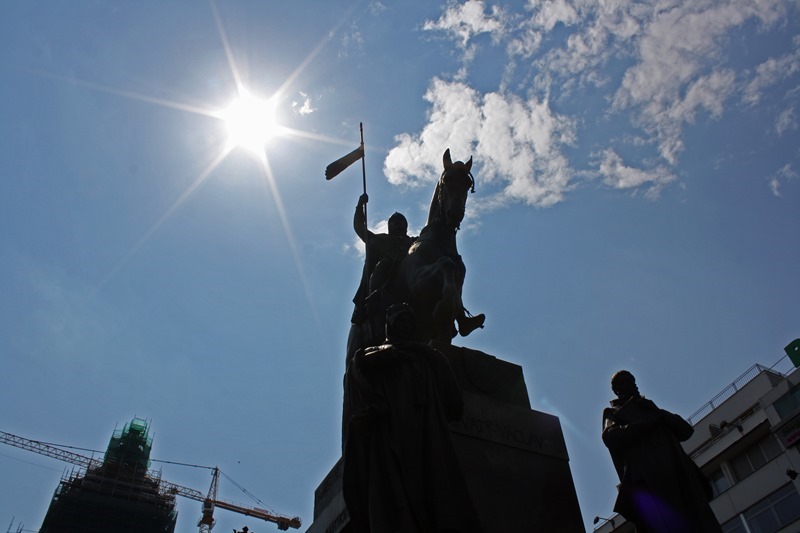 We decided to take a slight detour so that we could see Henry’s Bell Tower (known as Jindřišská věž in Czech). The story of the tower is that the church of St Henry needed a bell tower but it was clear that its walls were not strong enough to support the weight of the bells. The decision was made to make a detached bell tower instead. 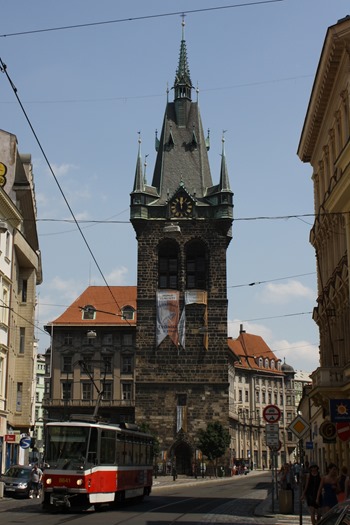 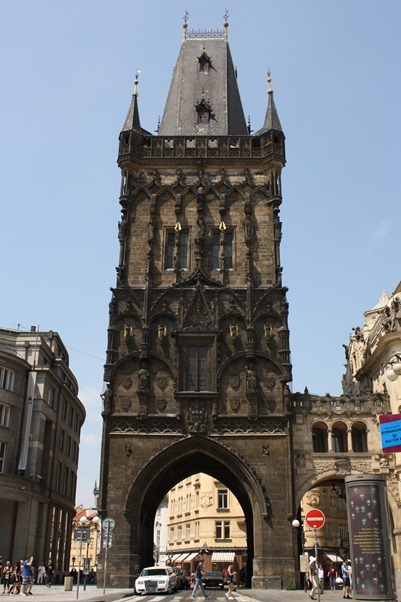 Our detour took us past another tower, this time the famous Powder Gate. The Powder Gate was originally intended to form part of the defences for the adjacent Royal Court but construction halted 8 years after it began in 1475 due to riots which caused the king to flee. It never did serve a defensive purpose and gained its name after it was used to store gunpowder in the 17th century. Look at that beautiful detail. 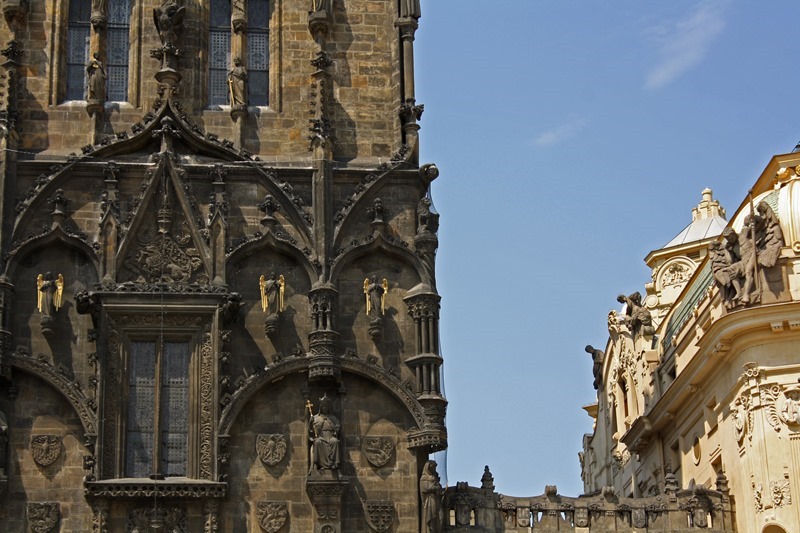 Adjacent to the Powder Gate is the Municipal House or Obecní dům in Czech. 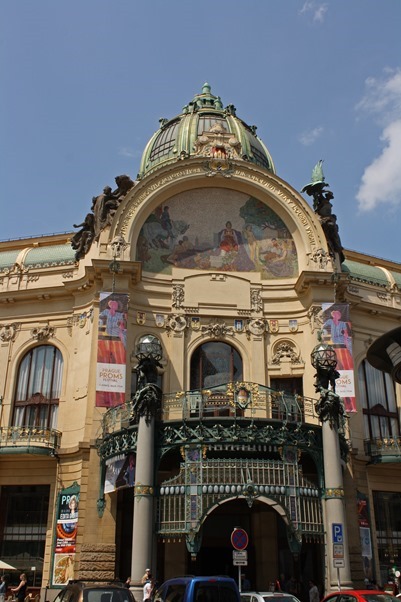 We decided to escape the heat and the glare of the sun to explore this beautiful building and you can read all about it in Art Nouveau Opulence in Prague's Municipal House. 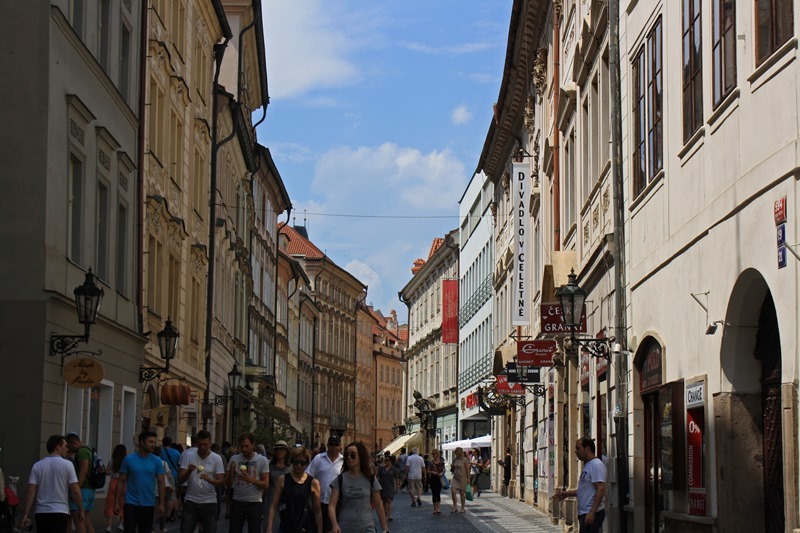 All too soon, we were out in the sun again and decided it was time to head for Old Town Square. We strolled down Celetná Street which was blessedly shady and took a look at some of the touristy fare. 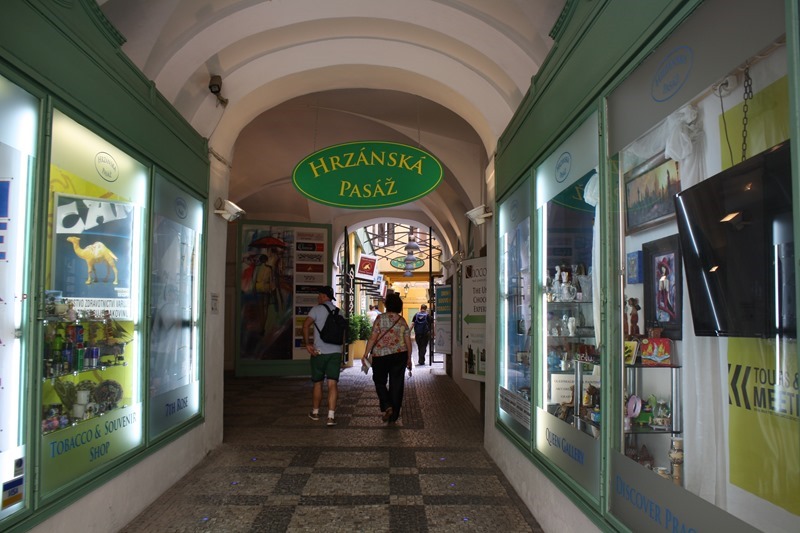 We finally broke out onto Old Town Square and stood staring at the people and crowds for a very long time. 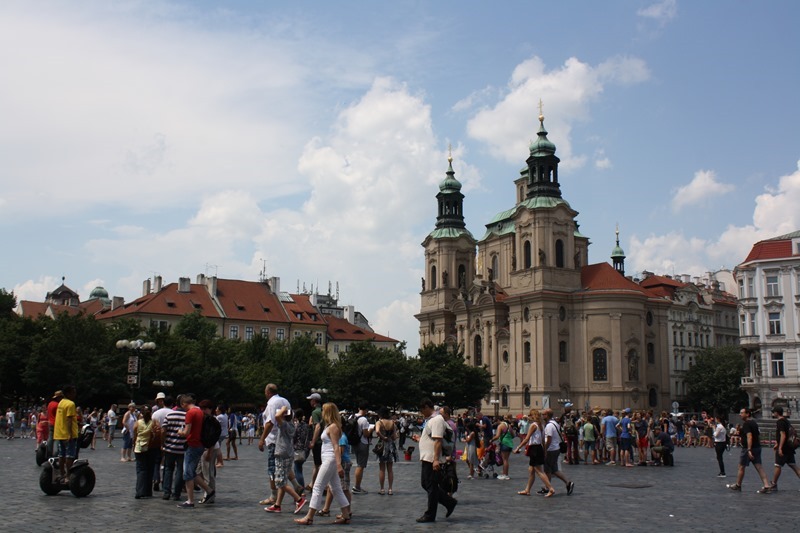 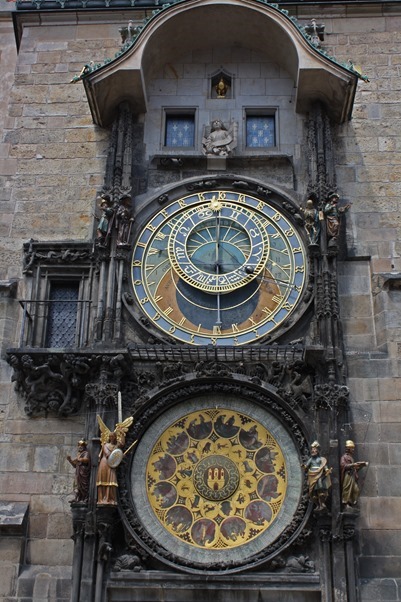 I finally got my bearings and made a beeline for the famous Astronomical Clock which has adorned the side wall of the Town Hall since the end of the 15th century. As I negotiated the crowds to get a better view, I peered over my right shoulder and saw a very unimpressed-looking husband glaring back at me. It seems that I had rushed off without notice (after dragging him around for several hours) and he was not happy. Realising that it was high time for a beverage and a break, I decided that we’d had enough exploring for the time being. 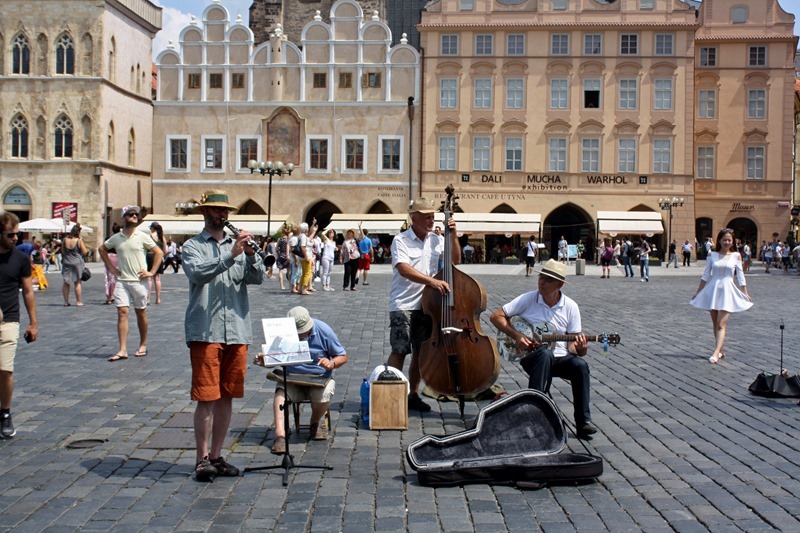 We walked back through Old Town Square, stopping only to admire these buskers. They were very good. 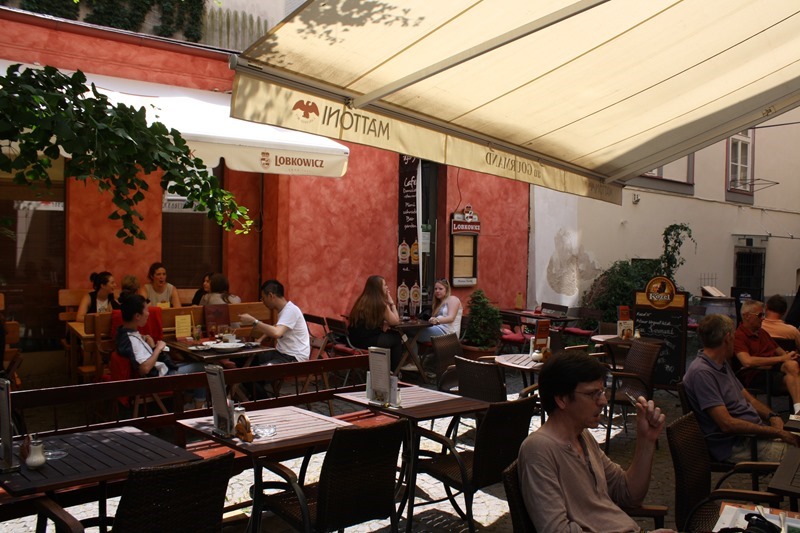 We then turned into an alleyway at the edge of Old Town Square and found a seat at Au Gourmand.We were incredibly hot and thirsty and both managed to inhale a fresh mint iced tea followed by an orange and ginger homemade lemonade during our short time there. They were both delicious and a great help in cooling us down. 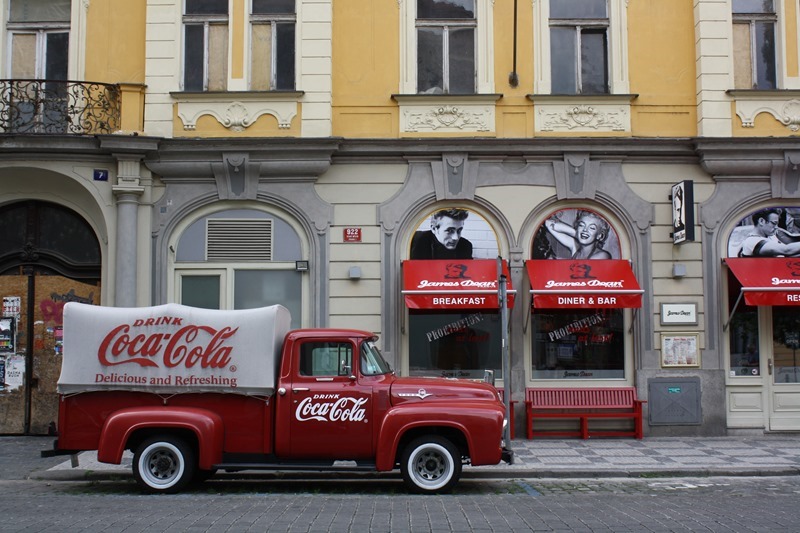 There is no rest for intrepid explorers though and soon we were on our way. As we exited onto Dlouha Street, Stephen was thrilled to spot a classic Coke truck and excitedly send a photo off to his colleagues. I guess you do have to be a bit of a Coke geek to work for a certain company. 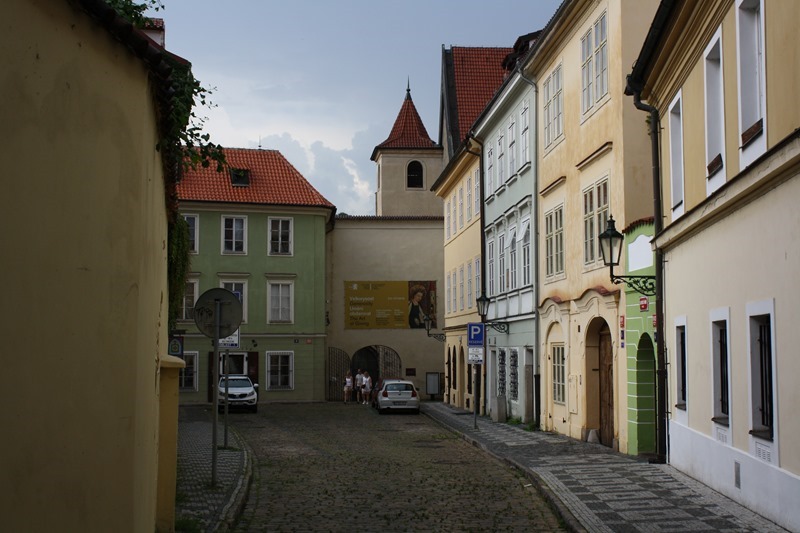 We wondered down the streets of the Old Town, walking towards the Jewish Quarter and soon arrived at the exquisite St Agnes of Bohemia church. This wonderful place deserves its own post but I’ll leave you with just a taste of the Presbytery of St Francis inside St Agnes. 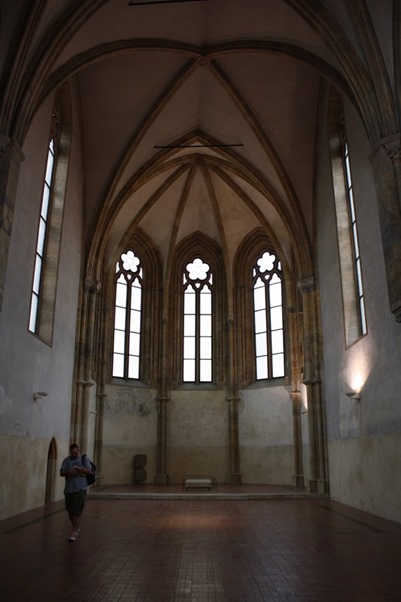 That tiny little person in the photo is Stephen and it gives you an idea of how vast the presbytery is.

After our visit to St Agnes, we strolled through the Jewish Quarter hoping to eat at one of the famous restaurants. Despite my heritage, I did not realise what day it was and soon realised it was Saturday when we noted that all of the restaurants were closed! I’m happy to report that it was our only culinary disaster of the trip and we opted instead to head inside the Kolonial for their signature pork knuckle. 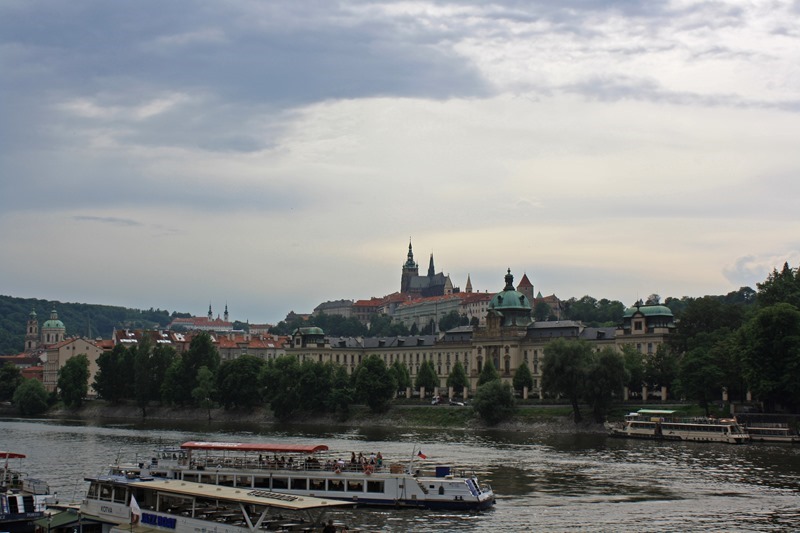 We managed but a short walk after our meal but the day was beginning to take its toll on our legs. Feeling rather smug at all we had managed to see in one day, we descended into the blissfully cool Metro at Staroměstská and took a train back to the hotel. 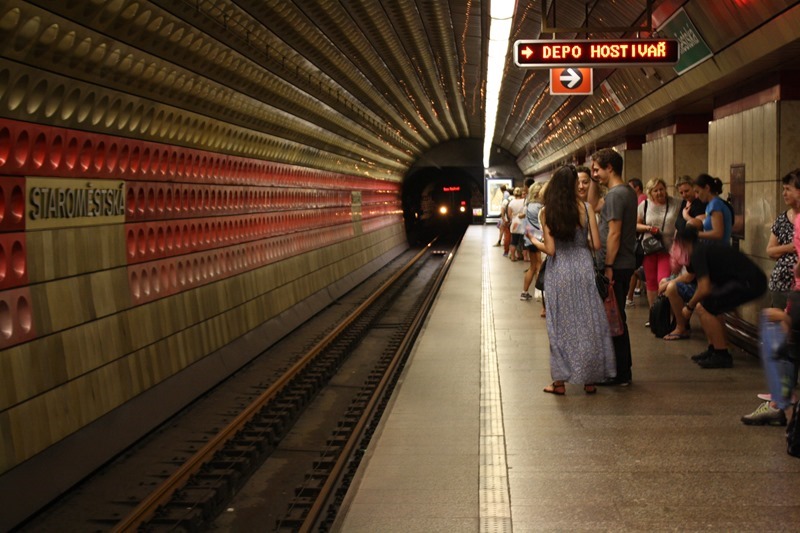