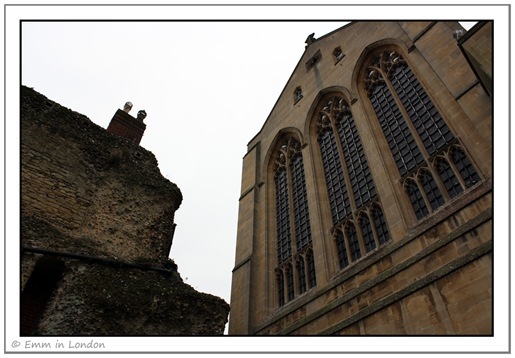 Throughout our exploration of The Ruins of the Abbey of St Edmund, we could see St Edmundsbury Cathedral in the near distance.  Like the houses I showed you at the end of the post on the ruins, the cathedral stands right alongside them.  An important destination for pilgrims from the 11th to the 16th century, all that remains of the Abbey at Bury St Edmunds, the wealthiest and most powerful Benedictine monastery in England, is St Edmundsbury Cathedral, St Mary’s Church and the Abbey Gate and Norman Tower. 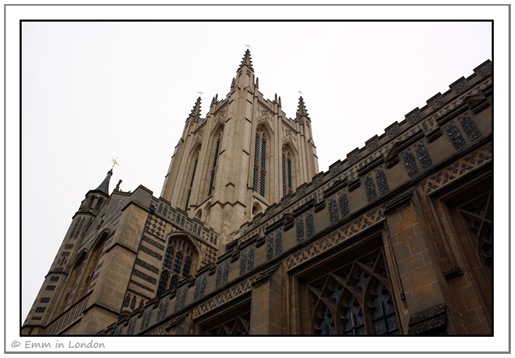 The story of St Edmundsbury Cathedral is really fascinating.  The part of the cathedral that most captured my imagination, both inside and out was the Millennium Tower but as you can judge from the name, it is the most recent addition to the cathedral, completed only in 2005.  In truth, the construction of the church was never completed and it remained incomplete for 450 years. 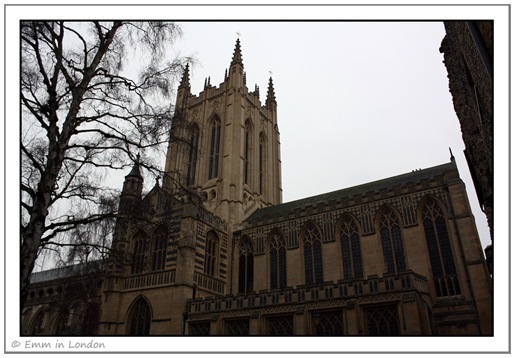 When St James's Church was merely a parish church located in the complex of the majestic Abbey of St Edmund, it was deemed unnecessary to add another tower.  The Victorians began restoring cathedrals but never cast their eye on this parish church.  When St James's Church became the Cathedral Church of the Anglican Diocese of St Edmundsbury and Ipswich in 1914, it became clear that the cathedral would need to be completely restored. 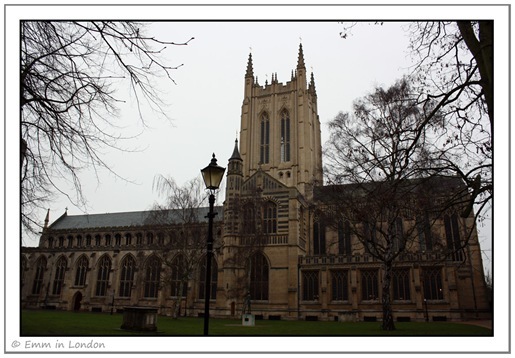 The upheaval and financial strain of the First and Second World Wars meant that work only began in earnest in 1959.  Stephen Dykes Bower had been appointed architect in 1943 and when he died in 1994, he left £2 million to a Trust for the completion of the cathedral.  They also received another boost in 1997 when the Millennium Commission granted £5.15 million.  It seems that the cathedral would finally be completed after 450 years and construction of the tower began in 2001. 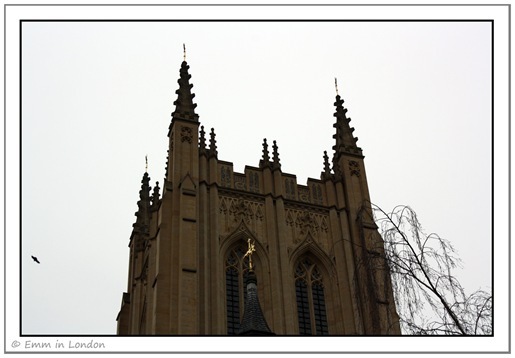 I stood looking at the tower for a very, very long time.  A local couple could obviously see my interest in it because they came over to me to chat.  They must have read my wondering mind because they confirmed that the  weather veins are solid gold.  They also pointed out that you can see the letter E (for St Edmund) on the face of the tower, just below the battlements.  It is in gothic uncial script, which was popular in medieval England, and is endowed with a crown.

I really love that they remained so faithful to the medieval gothic style when building the tower.  In fact, they clad the outside of the tower with the distinctive stone from Barnack and Clipsham to ensure that it blended in with the rest of the building. 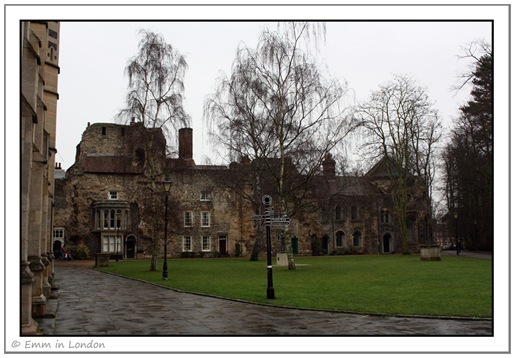 In the background of the photo above, you can see the post-medieval houses that were built into the remains of the south west tower and walls of St Edmunds Abbey.  I find that quite mercenary and opportunistic, even for the English whose history can be quite gruesome and horrible at times! 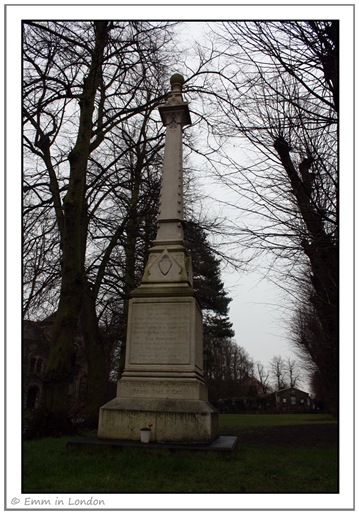 Just before we went inside the cathedral, we noticed the Martyr’s Monument.  You will find these memorials located around England to remember the protestant martyrs who were killed during the reign of Queen Mary I for their protestant beliefs.  Mary I wanted to return England to Roman Catholicism and her gruesome campaign earned her the name of Bloody Mary. 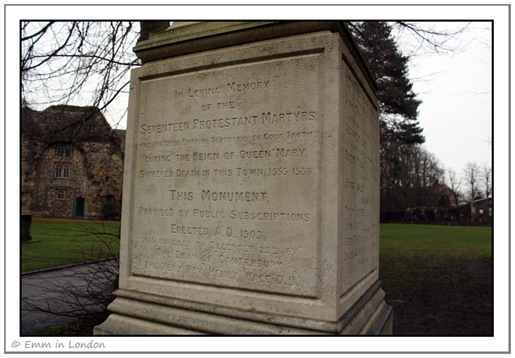 This monument remembers 17 protestant martyrs from Bury St Edmunds who died between 1555 and 1558.  The monument was paid for by public subscriptions and was only erected in 1903.  It seems like many of the martyr’s monuments were erected during Victorian times.  I wonder why it took them so long but also why it seemed important to them at that time, four centuries later?