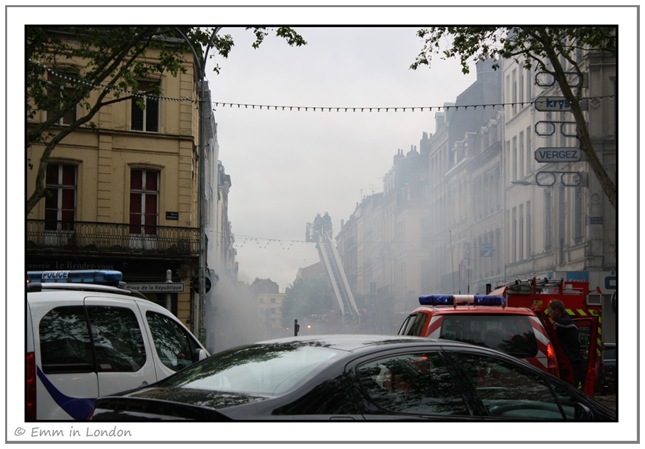 When we visited Lille, we parked really far away from the centre of town.  As we began the long walk back to the car, we got increasingly uneasy as response cars and fire trucks raced up the road, sirens on and lights blazing, and soon we noticed a lot of smoke.  We had the whole conversation about just how much trouble we’d be in if it was our car on fire, despite being insured.  Let’s just agree that we’d probably still be in France sorting it out.

It turns out that a fire had broken out in a nearby apartment building and we reached the scene in time to watch people being rescued from the building.  The whole situation was very calm and professional and as far as we could tell, everyone was rescued and reached safety.

And we were very, very lucky too.  We were parked in that precise part of the street, one street along.  Apart from having to conduct an illegal u-turn and drive into oncoming traffic, we were able to get away just fine.  I guess the poor people in France have come to expect that from GB drivers anyway.