It is no secret that I am a massive fan of street art.  I love pop art, surrealism and other forms of modern art too, so street art is not too much of a stretch from what I like anyway.  I like the irony and the irreverence of street art, the risks the artists take to paint their pieces. Most of all, I’ve actually picked up a can of spray paint before and I know just how hard it is get the paint to do anything remotely reasonable once it gushes out of the nozzle so I have great respect for street artists.

I went on one of their tours last year (and I’ll likely go on another one next year) and I took tons and tons of photos.  In the end, it seems that I took too many photos and I never really blogged about it.  This time I promised myself that I would be a Better Blogger™ and so I took less photos and have managed to narrow it down to… 20 of my favourite photos.

Honestly, if I procrastinate about it any longer, I’m still not going to have written a post before I go on the next tour.  So I’m going to split this between two posts and without further ado, here are my first ten favourite photos from that day. 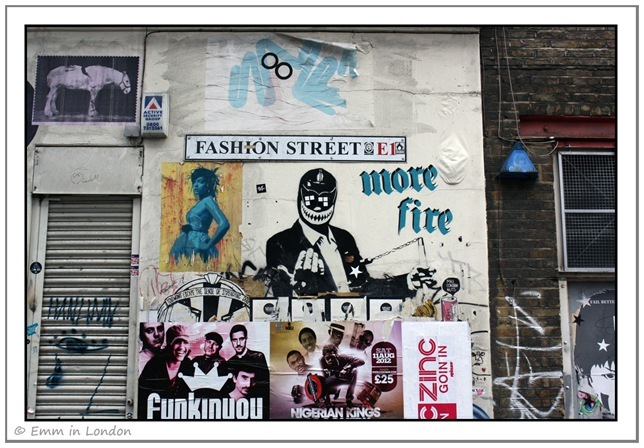 The Alternative London Street Art Tour takes place in London’s East End.  We all met up at Spitalfields and wound our way through Fashion Street, Brick Lane, Hanbury Street, Chance Street and beyond.  This is a fantastic area steeped in history and the best thing about the tour is that you learn a little bit about that history too.  Of course, that is the subject of a whole other blog post.

We began the tour by learning that street art is illegal which I was very happy to discover as I hadn’t previously known that.  Just kidding.  We also learned about the various techniques including stencils, paste ups and free hand painting.  Above you can see a paste up to the left, and stencil to the right and nasty, equally-illegal-but-not-as-aesthetically-pleasing promotional posters below. 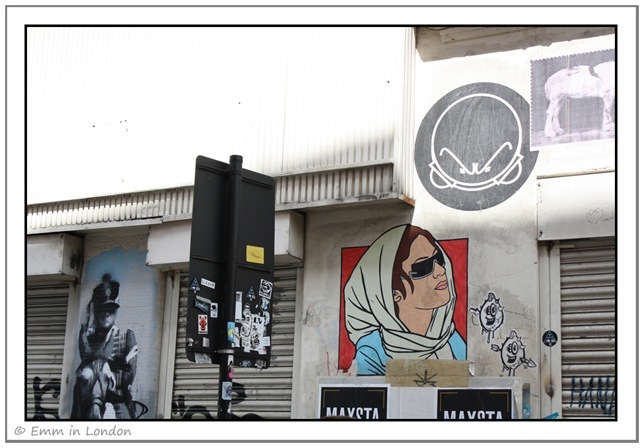 I can certainly see why people would find street art distasteful but when a certain area gets a reputation for street art, it is often representative of great political and social change.  That is Conor Harrington’s Horse and Cavalryman you can see to the left above. 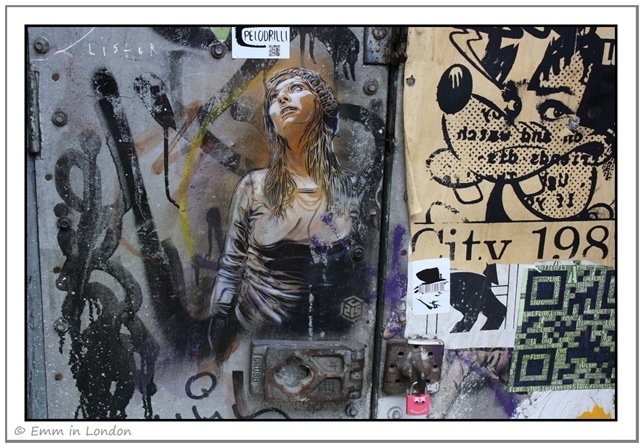 When I went on the walk last year, my favourite artist was Roa and I did manage to post about Roa's Crane.  This year, my best discovery by far was the street artist C215.  I had to come dangerously close to a discarded pair of underpants to take the photo above but this lovely woman is absolutely worth it.  You can see the artist’s signature to her bottom right, it looks like a cube.  I took some more photos of his work below. 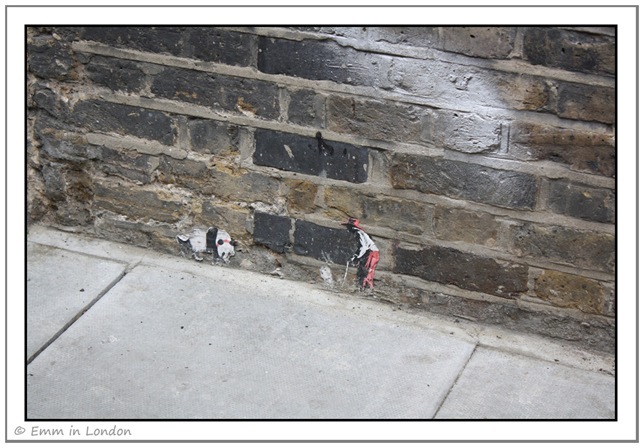 It is always a thrill to spot some of Pablo Delgado’s miniature figures.  You can see just how tiny they are as compared to the bricks and paving stone in the photo above.  This was also taken in Fashion Street. 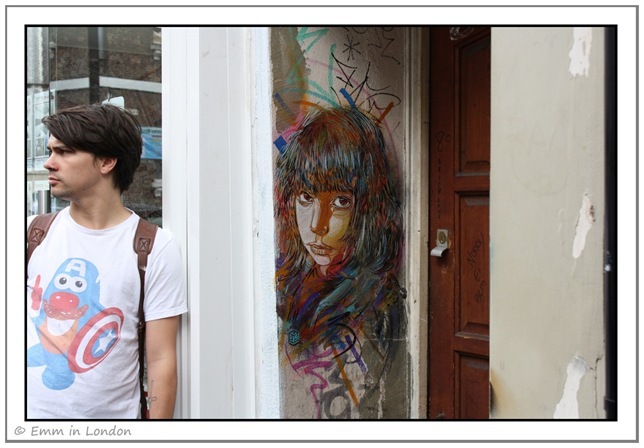 The photos above and below are both from C215, real name Christian Guémy (my New Favourite Street Artist™).  In the photo above, our tour guide Ben Slow stands next to a stunning rendition of the artist’s daughter Nina.  He told us a story about how he split up from Nina’s mother and began to paint Nina’s portrait on the streets on her way to school so that she would see them and know that he was still thinking about her.  Apparently she wasn’t too impressed at first but in this interview by Stephanie Sadler (of Little London Observationist fame), he says that Nina is now a street artist in her own right. 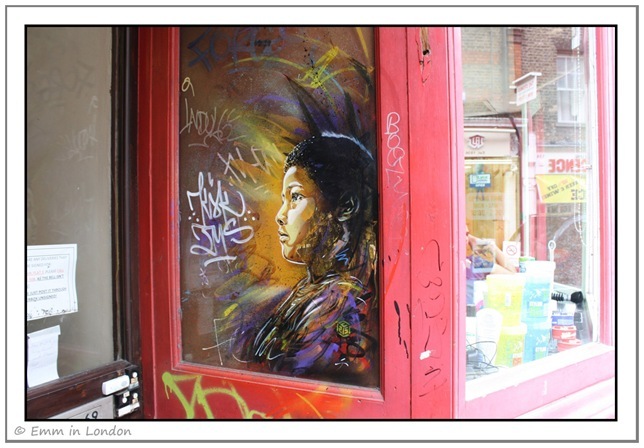 And here you have Roa’s Crane.  While we were standing here, the owner of the establishment came out to speak to us.  He said that he was in negotiations with another artist to paint the space to the left of the crane which should be exciting to see. 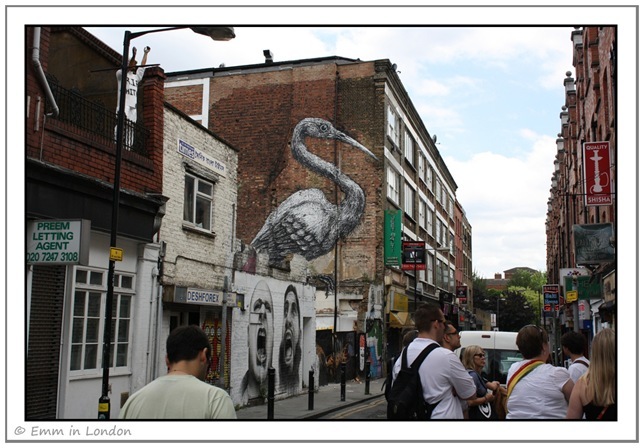 Our guide Ben was very unhappy to see that Fin DAC’s A Pleasure Unknown had been tagged over.  Now there is no denying that this piece was just incredible and the detail in the girl’s eyes was stunning, but I kind of like how it looks now.  Oh look! It looks like the artist agrees with me and if you click this link, you can see before and after shots: The Changing Face of A Pleasure Unknown. 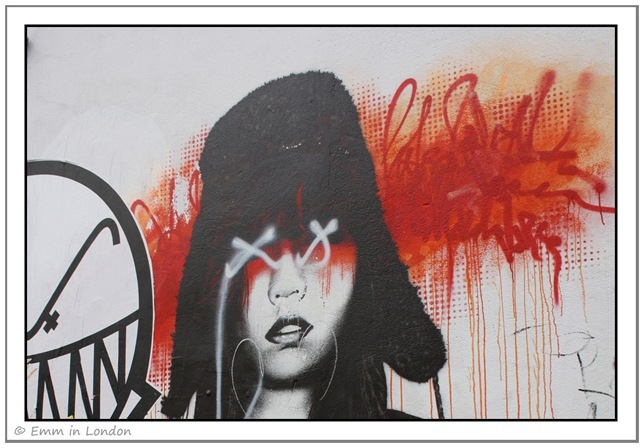 And this piece… how magnificent is it?  It was done by none other than our guide Ben Slow and it depicts a white nationalist from the English Defence League (EDL) and an Islamic Extremist.  To each other, they are worlds apart but in the end they represent the same thing.  Intolerance, hatred, racism.  They are as bad as the other and anyone who does not conform to their narrow view is an enemy.

Ben said he had expected more of a backlash with this piece but was surprised at how well people have embraced it and understood its meaning. 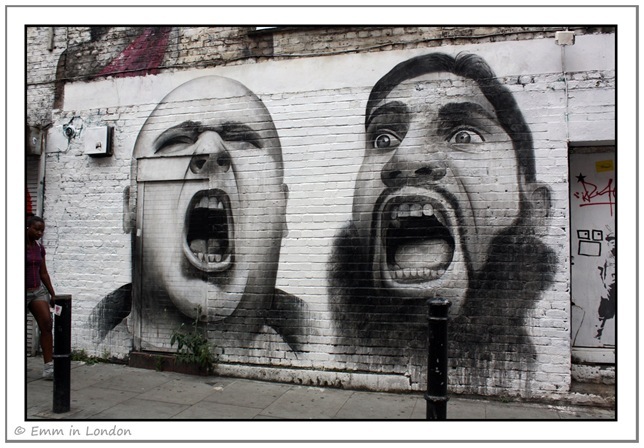 One final photograph for this post before I take you on to see a real Banksy in the next post!  These alternative road markings can be found outside the Widen + Kennedy offices at 16 Hanbury Street.  I think they’re really funny and one day hope to take a decent photograph of them.  Next time maybe? 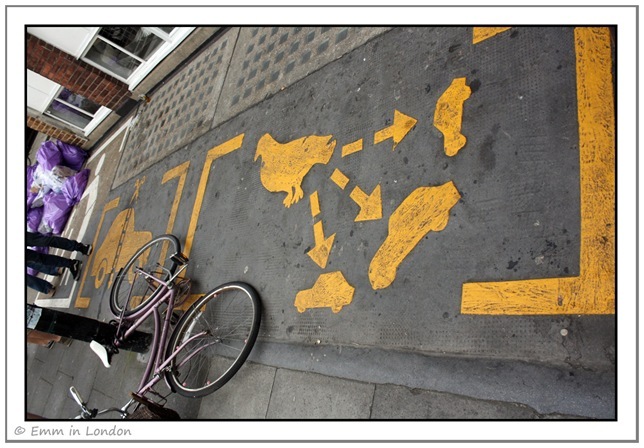